Thomas Piketty on Inequality and Capital 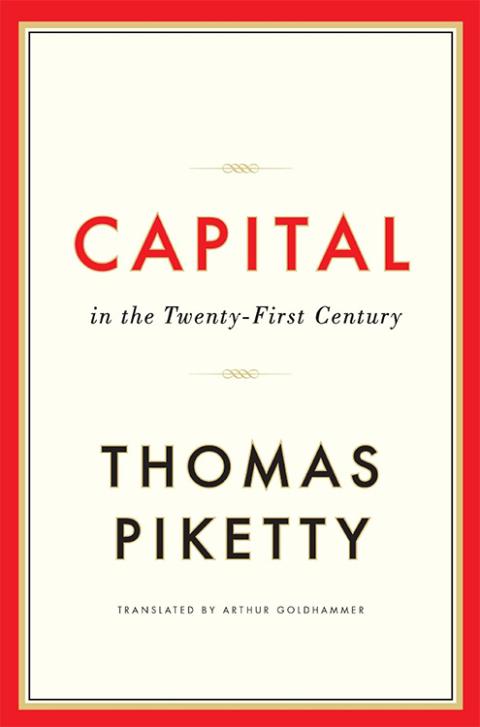 Thomas Piketty, a 42-year-old economist from French academe has written a hot new book: Capital in the Twenty-First Century. The U.S. edition has been published by Harvard University Press and, remarkably, is leading the best seller list; the first time that a Harvard book has done so. A recent review describes Piketty as the man “who exposed capitalism’s fatal flaw.”

So what is this flaw? Supposedly under capitalism the rich get steadily richer in relation to everyone else; inequality gets worse and worse. It is all baked into the cake, unavoidable.

To support this, Piketty offers some dubious and unsupported financial logic, but also what he calls “a spectacular graph” of historical data. What does the graph actually show?

Let’s think about what this really means. Relative income of the top 10 percent did not rise inexorably over this period. Instead it peaked at two times: just before the great crashes of 1929 and 2008. In other words, inequality rose during the great economic bubble eras and fell thereafter.

And what caused and characterized these bubble eras? They were principally caused by the U.S. Federal Reserve and other central banks creating far too much new money and debt. They were characterized by an explosion of crony capitalism as some rich people exploited all the new money, both on Wall Street and through connections with the government in Washington.

We can learn a great deal about crony capitalism by studying the period between the end of WWI and the Great Depression and also the last 20 years, but we won’t learn much about capitalism. Crony capitalism is the opposite of capitalism. It is a perversion of markets, not the result of free prices and free markets.

One can see why the White House likes Piketty. He supports their narrative that government is the cure for inequality when in reality government has been the principal cause of growing inequality.

The White House and IMF also love Piketty’s proposal, not only for high income taxes, but also for substantial wealth taxes. The IMF in particular has been beating a drum for wealth taxes as a way to restore government finances around the world and also reduce economic inequality.

Expect to hear more and more about wealth taxes. Expect to hear that they will be a “one time” event that won’t be repeated, but that will actually help economic growth by reducing economic inequality.

This is all complete nonsense. Economic growth is produced when a society saves money and invests the savings wisely. It is not quantity of investment that matters most, but quality. Government is capable neither of saving nor investing, much less investing wisely.

Nor should anyone imagine that a wealth tax program would be a “one time” event. No tax is ever a one time event. Once established, it would not only persist; it would steadily grow over the years.

Piketty should also ask himself a question. What will happen when investors have to liquidate their stocks, bonds, real estate, or other assets in order to pay the wealth tax? How will markets absorb all the selling? Who will be the buyers? And how will it help economic growth for markets and asset values to collapse under the selling pressure?

In 1936, a dense, difficult-to-read academic book appeared that seemed to tell politicians they could do exactly what they wanted to do. This was Keynes’s General Theory. Piketty’s book serves the same purpose in 2014, and serves the same short-sighted, destructive policies.

If the Obama White House, the IMF, and people like Piketty would just let the economy alone, it could recover. As it is, they keep inventing new ways to destroy it.

Piketty understands “capital” as a homogeneous, liquid pool of funds, not a heterogeneous stock of capital assets. This is not merely a terminological issue, as those familiar with the debates on capital theory from the 1930s and 1940s are well aware. Piketty’s approach focuses on the quantity of capital and, more importantly, the rate of return on capital. But these concepts make little sense from the perspective of Austrian capital theory, which emphasizes the complexity, variety, and quality of the economy’s capital structure. There is no way to measure the quantity of capital, nor would such a number be meaningful. The value of heterogeneous capital goods depends on their place in an entrepreneur’s subjective production plan. Production is fraught with uncertainty. Entrepreneurs acquire, deploy, combine, and recombine capital goods in anticipation of profit, but there is no such thing as a “rate of return on invested capital.”

Profits are amounts, not rates. The old notion of capital as a pool of funds that generates a rate of return automatically, just by existing, is incomprehensible from the perspective of modern production theory. Robert Solow, in a glowing review of Piketty’s book, states: “The key thing about wealth in a capitalist economy is that it reproduces itself and usually earns a positive net return.” But this is nonsense from the point of view of microeconomics, entrepreneurship, uncertainty, innovation, strategy, etc.

Much of the excitement around Piketty’s work deals with his estimate of the long-term rate of return on capital, and how this compares to the long-term rate of economic growth. I hear from third parties that Piketty’s calculations (the early work was done with Emmanuel Saez) are thorough and careful, and I have no reason to doubt the empirical part of the book. But it seems like a pointless exercise to me — I don’t know what the underlying constructs even mean.

Of course, there are many other issues related to the interpretation of these data and what they mean for social mobility, fairness, etc. For example, there may be much more vertical movement than Piketty’s admirers admit — few people remain in one part of the income distribution all their lives. And most Americans are capitalists, with some of their financial wealth invested in equities through their retirement portfolios. So the link between (say) stock-market performance, rents on land and natural resources, and interest returns and the distribution of financial wealth among individuals is complicated.