A Theory of Bribes 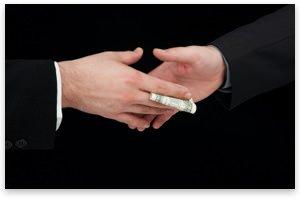 The definition of a bribe is rather arcane. It isn't even clear whether they are harmful. Lew Rockwell and Pierre Lemieux have made the case that public bribes are simply the cost of doing business, similar to taxation, and an opportunity to overcome at least some harmful governmental regulation and gain entry into markets.

Arguing about the relative merits of bribery versus taxation is very much (perhaps exactly) like speculating about the most pleasant way to be robbed.

Nevertheless, as acknowledged in Pierre Lemieux's article, bribes "accustom people to cheating not only in their relations with the state but also in their private relations," and can also be used to shut out competition, which is clearly harmful.

It also seems clear that many entrepreneurs avoid certain regions because their culture of rampant bribery, as compared to taxation, is significantly more opaque and unpredictable, hindering economic calculation. They prefer the devil they know over the one they don't.

Regardless of their relative merits, bribes are a phenomenon distinct from taxation and regulation. Examining where and to what extent illicit bribes exist sheds further light on the distinction between the private, voluntary economy, and the public, coercive one.

Bribes are payments or favors exchanged to influence the spending of wealth or the providing of a service, which are also somehow morally reprehensible and often secret. This highly subjective definition applies differently in four separate cases:

If an individual receives a payment or favor to influence the spending of his own money, it cannot generally be considered a bribe, but a coupon, discount or rebate. Extending the definition of bribes to encompass individuals spending their own wealth would require the monthly Value Pack many people receive in the mail to be considered an envelope full of bribes.

Similarly, if an individual receives payment or favors for providing a service, it would be very difficult to portray it as anything other than a salary, wage or commission.

The best argument for the existence of bribery in the realm of individually provided services can be made in cases of misrepresentation: an influential restaurant critic offering a dishonest review, or a famous athlete pretending to use health products which don't really help him.

These cases create no violation of property rights.1 The public may feel deceived, but they have no property rights over the newspaper that runs the column or the television station that airs the commercial. Furthermore, the restaurant critic's reputation and future marketability will rise or fall accordingly, as will the athlete's, limiting their dishonesty.

Of course, if the misrepresentation reaches the point of fraud, a case can be made for breach of contract between consumers and the restaurant or the sellers of health products, but fraud is a crime separate from bribery.

Bribes in the case of individuals operating with their own resources, do not exist. The misrepresentations often associated with what we call bribes are constrained by free-market competition.

A payment made to an employee to influence the spending of his employer's money, like a procurement officer receiving money in exchange for purchasing one type of machinery as opposed to the most favorable kind on behalf of his employer, can certainly be considered a bribe in the nefarious sense.

Such cases are generally rare, because business owners are very good at looking after their money, and those who aren't don't remain business owners very long. Furthermore, as illustrated in Murray Rothbard's disk-jockey example, it is only the employer whose property rights are violated:

Surely, in a moral sense, the public is being betrayed in its trust in the disc jockey's sincerity. That trust turns out to have been a foolish one. But the public has no property rights in the radio program, and so they have no legal complaint in the matter. They received the program without cost. The other record companies, the producers of Records B, C, and D, were also injured since their products were not played as frequently, but they too, have no property rights in the program, and they have no right to tell the disc jockey what to play.

Was anyone's property rights aggressed against by the disc jockey's taking of a bribe? Yes, for as in the case of the bribed purchasing agent, the disc jockey violated his contractual obligation to his employer … to play those records which in his view will most suit the public. … Furthermore, if the record company had bribed the employer directly … then there would have been no violation of anyone's property right and therefore properly no question of illegality.

In cases of misrepresentation, like a teacher receiving bribes to inflate grades, it is very likely that the teacher, similar to the disk jockey, has violated his contractual obligation to his employer. The question of whether the rights of other students are violated is addressed in the next section. Bribes in the case of employees operating with their employer's resources are rare because every employer is naturally vigilant toward his private property. When bribes occur, it is the employer whose rights are violated.

When money or favors are given to influence the purchases made by business, the case is analogous to the individual one discussed above. They are coupons, discounts, rebates, or additional services, not bribes.

Similar to the previous examples of misrepresentation, a case for bribery can be made where, for example, a private educational institution (not just a rogue teacher) receives bribes to give particular students higher grades.

In the unlikely case that a contract between academic institution and students (or their parents) specified an objective rating of students' abilities, then the contractual obligations of the university toward the students were violated, and the students can and should seek restitution. Once again, however, the crime is the fraudulent representation of services, not the actual bribe.

As far as I know, academic institutions do not currently write such contracts with their students. Perhaps the practice would arise in a free market for education as some institutions would see arbitrary grading at a rival school as an opportunity to distinguish their more honest brand of scholarship.

Absent such contracts, no violation of property occurs. The consequence of such a practice will very appropriately be the rising and falling of the academic institution's reputation.

It is unlikely that the market would tolerate academic institutions whose grading arbitrarily reflects the students' abilities. What is much more likely, and already widely practiced, especially in nontechnical studies, is a uniform grade inflation for all students at a particular university in exchange for their tuition.

I know of a friend of a friend who taught at an Ivy League school. When attempting to give bad grades she was cautioned by her adviser that "the parents of these kids aren't paying $40k a year for their children to receive Cs and Ds."

The ultimate arbiter of the grades will be the future employers of these students. Employers already can and already do use many criteria completely apart from grades.

Among businesses operating with their own resources, criminal bribes do not exist. What people sometimes recognize as bribes, are dishonest or fraudulent representation of a service. The free market is perfectly capable of regulating the dishonesty.

Bribes in the Public Sector

In the public sector, bribes, in the most nefarious sense of the word, are rampant — so much so that politicians regularly attempt to distinguish themselves by claiming to be among the few who do not accept bribes.

Public corruption is often unpunished, because the main lever available to the true owners of the money, the public, is the election of the politicians who preside over the bureaucracy; and it is all too easy for politicians to stir the pot of emotional issues and cause the levers of democratic elections to be pulled for reasons unrelated to illicit bribery.

Where well-intentioned politicians seek to stem the corruption, they follow the path detailed in Ludwig Von Mises's wonderful little book, Bureaucracy. They descend into webs of rules and regulations.

It would be an interesting project to attempt to measure the quantity of land, labor and capital goods tied up in the government-accountability industry — and then to speculate whether there would be less inefficiency and waste if government simply threw in the towel on fighting corruption.

Illicit bribes are also rampant in government-provided services. Unlike the private school, restaurant critic, or athlete whose reputations compete with other schools, restaurant critics, and athletes, a health inspector, customs official, or license issuer does not face competition.

These providers of public services operate as government monopolies. They do not rely on their reputations and voluntary patronage of their service. In pursuing their individual self-interest, providers of government-monopolized services are much more likely to encounter situations in which the reward of a bribe is high enough to cover the risk associated with accepting it.

In both the spending of public money and the providing of public services, bribes are relatively common. They are a predictable and inevitable consequence of individuals pursuing their self-interest in the public sector.

The important difference between the public and private sectors is that private-sector competition naturally minimizes what we consider immoral and illicit bribes, while the public sector offers no effective mechanism for doing so.

In the private sector, a bribe refers to a payment to conduct fraud, breach of contract, or some generally immoral or illegal activity. The bribe precipitates a crime, but isn't itself a crime.

In the public sector, the nature of government monopolies and public spending causes the bribe itself to be criminalized. The criminalization, whether good or bad, is either a check that government attempts to put on its own corruption, or, for the skeptics, an illusion of accountability that the government considers necessary.

A close adherence to property rights leads to the conclusion that illicit bribes only exist in the public sector.

Roman Skaskiw’s work has appeared on the New York Times’ Homefires blog, in the Atlantic, Stanford Magazine and elsewhere. He is a graduate of the Iowa Writers’ Workshop, a six-year US Army veteran, and a recent convert to the Austrian School of economics. See his website.