Ten Reasons Not to Abolish Slavery 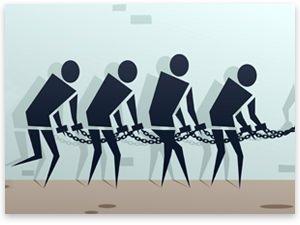 [This article originally appeared in the Freeman, December 2009.]

Slavery existed for thousands of years, in all sorts of societies and all parts of the world. To imagine human social life without it required an extraordinary effort. Yet, from time to time, eccentrics emerged to oppose it, most of them arguing that slavery is a moral monstrosity and therefore people should get rid of it. Such advocates generally elicited reactions ranging from gentle amusement to harsh scorn and even violent assault.

When people bothered to give reasons for opposing the proposed abolition, they advanced various ideas. Here are ten such ideas I have encountered in my reading.

At one time, countless people found one or more of the foregoing reasons adequate grounds on which to oppose the abolition of slavery.

Yet in retrospect, these reasons seem shabby — more rationalizations than reasons.

Today these reasons or very similar ones are used by opponents of a different form of abolitionism: the proposal that government as we know it — monopolistic, individually nonconsensual rule by an armed group that demands obedience and payment of taxes — be abolished.

I leave it as an exercise for the reader to decide whether the foregoing reasons are more compelling in this regard than they were in regard to the proposed abolition of slavery.

This article originally appeared in the Freeman, December 2009.