The Taylor Rule Won’t Save Us 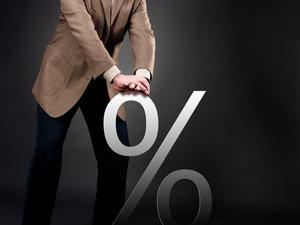 Various criticisms have been raised against the Fed, not only from the side favoring the abolition of central banking, but also from the side of those who argue that the Federal Reserve is indispensable for stability. One of those arguments came from respected economist John Taylor, who is the author of the often mentioned “Taylor Rule” on how to conduct monetary policy, with two House Republicans recently proposing to impose this “rule” on the Fed.

Like Taylor, politicians who advocate for such a rule blame huge credit expansion for the Great Recession. Unfortunately such policymakers are usually not convinced by the Austrian arguments in favor of abolition of the Federal Reserve. Instead they are convinced by John Taylor’s statistical demonstrations. According to Taylor, the Fed set the interest rates too low in the beginning of this century, which led to an unsustainable real estate boom. He adds nonetheless: if only the central bank followed his rule of proper interest rate levels, then monetary policy would work very well.

For Taylor, the Federal Funds rate in recent years should have looked something like this: 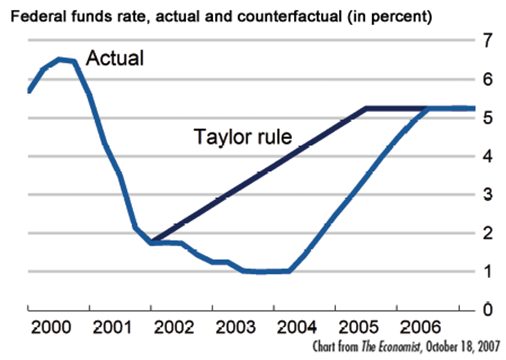 The first thing to note about the Taylor Rule is that, strictly speaking, there is no such thing as one universal Taylor Rule. There are many possible Taylor Rules, depending on a variety of factors, on which there is no agreement. Any version of the rule crucially depends on the usage of mathematical variables and their coefficients in the used equation, which is used for calculating the “right” level of interest rates set by the central bank. Those main variables are price inflation and the so called “output gap,” a difference between “actual output” and “potential output.”

Depending on which variables we exactly pick and how we use them, we can have different rules, and therefore different interest rate policy recommendations. It is all well documented in the mainstream literature. Economists disagree how to measure “potential output” (should we use trends, econometric models, or “production function models”?) and there is no agreement how much importance should be assigned to it. There are discussions about the nature of the data that is being used — should it be the one registered currently, or real-time data, or should it be somehow adjusted, since every data set will sooner or later become revised data? Or perhaps since monetary policy takes time we should focus more on the predicted data, rather than just look at the immediate past? We can add to this the Austrian flavor: there are problems with proper price inflation measurements (various indices can differ significantly), and even the actual output measurements can be questioned as proper indicators of economic activity.

The crucial question to be answered is the following: can reliance on one particular version of the Taylor Rule pave the way for a bubble-proof economy? As described above, a Taylor Rule in any of its versions can at best target the balance between a chosen index for “price inflation” and a chosen way of measuring the invented concept of aggregate “potential output.”

The problem is that targeting either of those macroeconomic variables is not a recipe for intertemporal coordination understood in the Hayekian sense: as coordination between successive stages of production. In his major works Hayek proved that targeting one selected variable, such as price inflation, is not a proper formula for macroeconomic stability. Actually, stabilizing the index may ultimately cause macroeconomic destabilization. It is the same case with Taylor Rules, although in the rule the concept of “potential output” is hidden. Yet this potential output describes production in the aggregate, so it cannot capture the notion of intertemporal coordination among many acting individuals in countless industries.

Malinvestment bubbles are still possible when the central bank follows Taylor Rules, because by targeting potential output and price inflation the central bank triggers artificial credit expansions. For an example, we need only look to the dot-com bubble which happened even though the federal funds rates were actually significantly higher in the nineties than the most-used version of the Taylor Rule would recommend at that time.

The answer to the Taylor Rule is the Hayek Rule, which is the rule of balancing savings with investments in truly free financial markets. Meanwhile, we must endure the current situation of a market stimulated by the central bank with its pretense of knowledge about the “right” price for money and credit.