GET NEWS AND ARTICLES IN YOUR INBOXPrint
A
A
Home | Mises Library | The TARP Is Dead, Long Live the TARP

The TARP Is Dead, Long Live the TARP 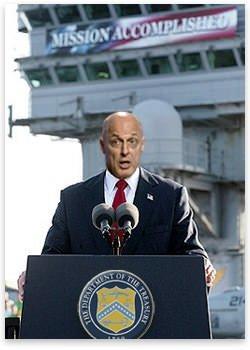 Think back. Think far, far back into the past. Think all the way back to the last week of September 2008. Historians tell us that at that time many Americans took leave of their senses. Despite all the evidence of their own eyes, ears, and noses, they became persuaded that the world as they had always known it stood on the verge of utter destruction. Hysterical "journalists" and "experts" on radio and television told them so. What else could they do? Because life without a flush 401(k) lay beyond their wildest imagination, they concluded that "something must be done."

That realization became the signal for hundreds of devoted public servants to leap into action to save civilization. Understanding full well that the people expected them to "do something," they looked around for something to do, and the first thing they noticed was a bill that the Treasury Department had put forward. They didn't like it at first, but after rather frantically redesigning it as a gigantic Christmas tree with all sorts of ornaments and lights they fancied would aid their reelection, they enacted the Emergency Economic Stabilization Act of 2008, known in some quarters as the Bailout of Abominations.

The core of this statute consists of the Troubled Asset Relief Program (TARP), in which the secretary of the Treasury would expend as much as $700 billion in two installments to purchase rotten paper, such as mortgage-backed derivatives, from banks and other financial institutions. It was a bold stroke, to be sure. An unnecessary and foolish stroke, too, yet, withal, bold in the fashion of fearing nothing but fear itself, which was precisely the kind of boldness the crisis seemed to demand.

The program's announced rationale required a fair quantum of inference to understand. The Treasury secretary claimed that the sine qua non was to unlock frozen credit markets, or to restore credit markets that had melted down—frozen, melted, whatever. The logic had something to do with the auxiliary claim that nobody trusted the banks enough to lend to them so long they held those rotten ("toxic") assets on their balance sheets because nobody knew when a bank holding such worthless assets might have to file for bankruptcy. Trading the rotten paper for the Treasury's rotten dollar deposits at the Fed was supposed to make the bankers so comfortable that they would lend to one another again, and thenceforth they would lend to businesses and consumers. Can't do anything without credit, you see. Credit flows are the "lifeblood" of a modern economy. All the government's spokespersons said so.

So Congress gave Hank Paulson the $700 billion, and the first thing he did was to take $125 billion out of the bag and give it to his pals at the nine biggest banks and investment banks in the country. Never one to display ingratitude, he gave $10 billion to Goldman Sachs, the firm he had headed before passing through the revolving door to the Treasury.

He went on to give other big financial institutions a cut of the loot, too. So generous was old Hank with the taxpayers' money that he has now handed out $290 billion of the $350 billion that Congress authorized him to spend immediately. He has traded the money for preferred shares in the recipient companies, thereby realizing Eugene Debs's cherished dream of bringing socialism to the United States, but — mirabile dictu — he has not spent a dime on the rotten paper whose purchase was the heart and soul of the big bailout law.

¿Porqué no? Well, it seems that despite plans to acquire the rotten paper by holding reverse auctions—a method so sexy that it made economists quiver in anticipation—the financial geniuses at the Treasury couldn't figure out how to pull off this peachy-keen type of transactions, even with help from the financial geniuses employed by Hank's pals at Goldman and Morgan Stanley (you know, the same MIT Ph.D.s who calculated a few years ago that nothing could possibly go wrong in the pyramid of mortgage-backed derivatives). Rather than spin the wheels trying to solve a complicated auction problem, Paulson decided — what the hell — he'd just go to the top of the Empire State Building and toss great gobs of money over the side on a windy day. It was bound to land in the right neighborhood so long as a northerly wind prevailed. So he tossed and tossed, and pretty soon he had thrown nearly $300 billion to the wind. Mission accomplished.

Finally, on Wednesday of last week, the Treasury announced officially that the TARP was dead as a dodo. The government was not going to buy any "toxic" assets, even though buying them had been the entire rationale for enactment of the EESA on October 3. Instead, the Treasury was said to be concocting a new plan, which the New York Times described as "aimed at unlocking the frozen consumer credit market."

Would you describe this report as indicating a "frozen" credit market? Total consumer credit outstanding in September, $2,588 billion, exceeded the average amount outstanding in any year from 2003 to 2007, the period of the credit bubble. See chart for consumer lending by all commercial banks.

Many banks have tightened lending standards recently, but credit continues to flow in huge volumes. If someone tells me these data are not sufficiently up to date to capture the present "frozen credit market," I say to him, show me your data. I'm open to evidence, but not much impressed by hysterical anecdotes.)

Meanwhile the objective of relieving banks of their rotten paper so that they would confidently resume lending to one another has become a moot point, because the Fed has undertaken to guarantee interbank loans. FDIC deposit guarantees have also been increased from $100,000 to $250,000 per account, another measure that should cause potential transactors to look upon the banks with a less jaundiced eye and thereby grease their lending skids.

Some might be tempted to call the TARP an utter failure, given that it failed completely to carry out its stated objective, but brighter boys will see that this interpretation is all wrong. Look, Hank's pals have the $290 billion that the Treasury has agreed to hand over to them; and before long, no doubt, Congress will authorize the Treasury to tap into the second bag of $350 billion for the purpose of promoting good will toward men, especially men (and women) whose votes for Democrats need to be rewarded in the Brave New Obama era. The United Automobile Workers union appears to be a leading candidate for such a reward (indirectly, in its case)—besides, if GM, Ford, and Chrysler went belly up, life on earth would screech to an untimely end, long before global warming had killed off the whales and the cockroaches. But many others besides the Detroit Bad Boys and their not-always-hardworking employees will be straining at the bit for a sweet chunk of the loot.

Notwithstanding the many developments on the bailout front during the past six weeks, the New York Times, like other media outlets, continues to quote Wall Street insiders who report, as Alex Roever of JPMorgan Chase did recently, "You have a market that is frozen." What planet do these guys live on? It certainly is not the same one to which the Federal Reserve's data apply. I've been singing this song for many weeks, but I'm going to keep singing it until somebody in the news media wakes up and realizes that these "frozen-credit-market" tales are pure hooey. Look at the data, for crissake. By now we should all be ready to move beyond hysteria, get a grip on reality, and begin thinking about how to repeal everything the government has done during the past six weeks.

[This essay originally appeared on LewRockwell.com.]