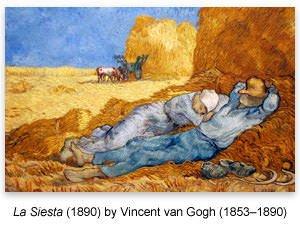 With victories over the Germans in the 2008 European Football Championship and during the 2010 World Cup, there is little doubt that the Spaniards have the upper hand on the soccer field. Yet while Spaniards have had much to cheer about in the soccer world over the last five years, the economic situation is a world removed.

Spanish unemployment is now hovering around 23 percent, with over 50 percent of youths jobless. Only around 6 percent of Germans are without work, almost the lowest level in the country since reunification. This divide solidifies Spain's position among the worst-performing economies of the continent, and Germany's vaunted position as among the best.

Yet such a situation might seem paradoxical. One could, for example, look at the wage rates of the respective workers and find that low-cost Spaniards are much more affordable. Profit-maximizing businesses should be expanding their facilities to take advantage of the opportunity the Spanish crisis has provided and eschew higher-cost German labor.

While fixating on nominal labor costs might provide a compelling case for a bright Spanish future, delving into the details provides some darker figures.

One of the main differences between Germany's and Spain's labor markets is their minimum-wage rates. A Spanish minimum-wage worker can expect to earn about €633 per month. Germany on the other hand enforces no across-the-board minimum wage except in isolated professions — construction workers, roofers, and electricians, as examples.[1]

German employees are free to negotiate their salaries with their employers, without any price-fixing intervention by the government in the form of wage control. (This is not to imply that the German labor market is completely unhampered — jobs are cartelized by industry each with its own wage controls. While this cartelization is not perfect, it does at least recognize that a one-size-fits-all minimum-wage policy is not optimal for the whole country.)

As an example of the German approach to wages, consider the case of a construction worker. In eastern Germany this worker would make a minimum wage of around €9 per hour. His counterpart in western Germany would earn considerably more — almost €11 an hour.[2] This difference allows for productivity differences to be priced separately or local supply-and-demand conditions to influence wages. Working for five days at eight hours a day would yield this German worker anywhere from €360 to €440.

It is obvious that the German weekly wage is almost as high as the monthly Spanish one. What is less obvious is why Germans do not move their facilities to lower-cost Spain.

As the old saying goes, "the more expensive you are to fire, the more expensive you are to hire." If a Spanish company decides to lay off an employee, the severance payment for most labor contracts (a finiquito in Spanish) will amount to 32 days for each year the employee has worked with the company. Although this process is not simple in Germany either, there is no legal severance requirement that companies must pay to redundant workers. The sole requirement is for ample notice to be given, sometimes up to six months in advance. If a Spanish company hires a worker who does not work out as intended, a substantial cost will be incurred in the future to offload the employee. Employers know this, and when hiring workers they exercise caution accordingly, lest this unfortunate and unplanned-for future materialize.

These factors make the perceived or expected cost of labor at times higher in Spain than in Germany, despite the actual monetary cost being lower in euro terms. This effect has been especially pronounced since the adoption of the common currency over a decade ago. As we can see below, the average cost of German labor is largely unmoved since 2000, while Spanish labor has increased about 25 percent over the same period. 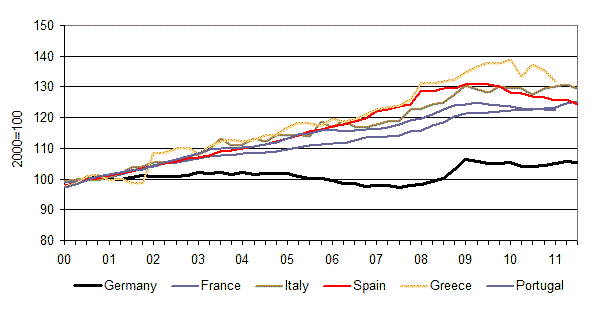 When hiring a worker, the nominal wage is only half the story. The employer also needs to know how productive that worker will be. Even after we factor for the extra costs on Spanish labor, a German worker could be more costly. A firm would still choose to hire that worker if his or her productivity was greater.

As we can see in the two figures below, over the last decade a large divergence has emerged between the two countries. While German productivity has more or less kept pace with its small increases in wage rates, the Spanish story is remarkably different. Productivity has lagged, meaning that on a real basis Spanish laborers are much more costly today than they were just 10 years ago.

In his book The Tragedy of the Euro, Philipp Bagus mentions a similar phenomenon. Bagus points to the combination of (1) the rising labor costs that result from eurozone inflation and (2) divergent productivity rates between the countries as a source of imbalance. Indeed, inflation has been one driver of rising (and destabilizing) wages in the periphery of Europe, and especially in Spain. Others include, as we have noted here, minimum wages, regulatory burdens, and severance packages that increase the potential cost of labor.

Every good has its price, even labor. When prices are hindered from fluctuating to clear markets, imbalances occur. In labor markets those imbalances are unemployed people. Policies such as a one-size-fits-all minimum wage and high mandated severance packages keep the price of Spanish labor above what it needs to be to clear the market.

Until something is done to ease these policies, Spanish labor will remain uncompetitively priced. Until Spanish labor costs can be repriced competitively, Spain's masses will need to endure stifling levels of unemployment.