GET NEWS AND ARTICLES IN YOUR INBOXPrint
A
A
Home | Mises Library | Is the Supreme Court Supreme?

Is the Supreme Court Supreme? 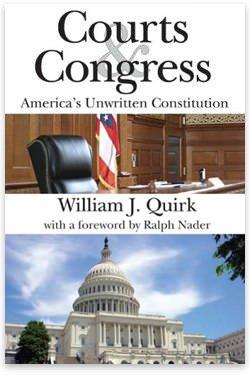 Courts and Congress defends a revolutionary thesis. If asked, who has the final say in our government on the meaning of the Constitution, most people would say, the Supreme Court. The Court itself agrees: in the famous Planned Parenthood v. Casey (1992) decision, it declared that it could not consider reversing Roe v. Wade (1973), because the American people had come to look to the Court as their guide.

William Quirk, one of the most original Constitutional theorists of our time, challenges this view.[1] No, he does not challenge judicial review, the power of the Court to find laws unconstitutional: this he finds solidly based. He criticizes the Court for abuses of interpretation; but so long as the Court sticks to the language of the document, all is well.

So far, you may ask, what is original about that? Do not many other critics of the Court attack its at-times-bizarre interpretive methods? Quirk's originality rests in his taking literally, and emphasizing, a part of the Constitution that most writers ignore. According to Article III, Section 2, the jurisdiction of the Supreme Court lies almost totally up to Congress. The Court has original jurisdiction only in cases involving disputes among the states and in cases where foreign diplomats are a party. Its appellate jurisdiction is subject to whatever "rules and exceptions" Congress chooses to make. So far as lower federal courts are concerned, they stand completely at the mercy of Congress. If it wished to do so, Congress could abolish the lower federal courts altogether.

Thus, if Congress does not like the decision of the Court in Roe v Wade and its successor cases, it can take away the right of the Court to hear any cases on appeal that involve abortion. True enough, that would still leave the decision on the books, and it would presumably be binding on other courts; but in practice, it might be difficult to sustain it. If a court decided to allow restrictions on Roe contrary to the mandate of the Supreme Court, this ruling could not then be appealed to that court for reversal. Congress might, by getting rid of the federal courts completely, leave abortion entirely in the hands of the state courts. In like fashion, of course, for other controversial areas. Quirk points out that until 1875, the lower federal courts did not have the right to hear appeals from state court decisions about federal law. By using its Article III powers, Congress could radically reshape constitutional law.

One might at first think that Quirk has made a mistake. Is he not blowing out of proportion a passage that really deals only with setting up rules of procedure for the federal courts? History buffs will be aware of the famous case of ex parte McCardle (1868), in which the Reconstruction Congress withdrew the right of the Court to hear a case, while that very case was pending before the Court; but is not this use of Article III an aberration? Surely, like the famous Tenure of Office Act, this was an example of how extreme that Congress was, rather than a guide to sound constitutional practice.

To those inclined to think so, the ruling of the Court in McCardle will come as a surprise. It fully recognized the right of Congress to withdraw its jurisdiction. The Court said,

We are not at liberty to inquire into the motives of the legislature. We can only examine its powers under the Constitution; and the power to make exceptions to the appellate jurisdiction of this court is given by express words… It is quite clear, therefore, that this court cannot proceed to pass judgment in this case, for it no longer has jurisdiction of the appeal; and the judicial duty is not less fully performed by declining ungranted jurisdiction than in exercising firmly that which the Constitution and the laws confer. (pp. 289–90)

It is Quirk's great merit to show that Congress's power to limit the federal courts is a recurring theme in American history. Quirk is a Jeffersonian; and he points out that Jefferson and his followers feared the potential for abuse in federal judicial power and acted to curb it. The Federalists had secured the appointment of a number of Federalist judges in the Judiciary Act of 1801.

Congressional power under Article III is far from a theoretical question. Congress has in fact acted to limit the federal courts in several notable instances. By the early 1930s, a majority of Congress had come to think that the courts often acted in an improperly antilabor way by issuing injunctions that forbade unions to strike. Employers who claimed that unions were a threat to their property did not have to go through the long and involved process of a civil suit. Once an injunction against a union had been issued, the court could instead hold the union in contempt and inflict civil and criminal penalties. Accordingly, in the Norris-LaGuardia Act (continually misspelled in the book), Congress, exercising its Article III authority, took away the power of federal courts to issue injunctions in labor cases. An interesting question, not discussed in the book, is why Franklin Roosevelt did not resort to this tactic in his disputes with the Court.

Again, in the 1950s, there was a Congressional outcry against several Supreme Court decisions that were deemed unduly protective of the civil liberties of members of the Communist Party. Senator William Jenner introduced a bill to withdraw the appellate jurisdiction of the Court in such cases; and although the measure failed to pass, its constitutionality was not seriously challenged.[2] Opponents, such as Senator Jacob Javits of New York, claimed rather that the bill was unwise. One eminent law professor, Arthur J. Freund, who opposed the Jenner Bill, responded in this way when asked whether it was constitutional to limit the Supreme Court's jurisdiction: "You can't challenge the constitutionality of a constitutional provision" (p. 234).

The famous Engel v. Vitale (1962) decision, which held recitation by a public school teacher of a prayer in class to be unconstitutional, and the failure of a proposed constitutional amendment to overturn it to gain sufficient votes, aroused Senator Jesse Helms in 1979 to propose a "stripper" bill, as this sort of legislation is called, but it also failed of passage. In a number of instances, though, Congress has in fact stripped the federal courts of jurisdiction, and several such laws remain on the books today.

In recent years, a number of scholars have maintained that the Article III power of Congress is limited and that it cannot, e.g., bring it about that a constitutionally protected right is withdrawn from judicial scrutiny. Supporters of this position can appeal to the weighty authority of Justice Story, who thought that Congress was required to extend the full "judicial power" mentioned in the Constitution to the federal courts. Quirk successfully shows, though, that there is an extremely strong case that Congress does have the power to strip the federal courts of jurisdiction.

If Congress has the power, should it use it? Would not doing so remove a necessary check on Congress? Quirk does not think so. In his view, again a Jeffersonian one, Congress is the dominant branch of the American government; unlike the courts, it is directly subject to the will of the people. If one objects that majority rule can deprive a minority of its rights, Quirk responds that rights are safer with the people than with unelected courts. Murray Rothbard, by the way, thought much the same, especially in his later years.

To the argument that stripper bills would introduce chaos into the judicial system, since without appeal to a highest court, there would be no guarantee of uniform rulings in different jurisdictions, Quirk again has an answer. Is not experimentation desirable? Why should we not have varying rules, suited to local conditions?

If Congress has such power over the Supreme Court, why is it reluctant to use it when the Court abuses the Constitution? Quirk locates the answer in what he terms The Happy Convention. The principal aim of most members of Congress is to secure reelection to office. In order to do this, Congress avoids controversial moral and cultural issues whenever possible. Far better to have the Supreme Court, an unelected body that voters cannot unseat, take the blame for unpopular decisions.

Similarly, the Constitution clearly gives Congress the sole power to declare war. But, wishing to avoid blame should a war go badly, Congress has abdicated its power to the president. It is better, Congress thinks, for him to take the blame for Vietnam or Iraq. By its own lights, the Congressional policy has been remarkably successful. Most incumbents are reelected. The cost, though, is a severe one. Our actual Constitution, one of congressional preeminence, has been replaced by the Happy Convention, in which the president and Supreme Court have supplanted Congress. No Jeffersonian can accept this.

This review originally appeared in The Mises Review, Fall 2008.