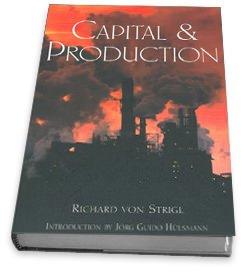 Richard Ritter von Strigl (1891–1942) was one of the most brilliant Austrian economists of the interwar period. As professor at the University of Vienna he had a decisive influence on Hayek, Machlup, Haberler, Morgenstern, and other fourth-generation Austrian economists.

Very few classic works on capital and business cycles in the Austrian tradition have been translated from the original German. Now Strigl's important contribution to Austrian capital theory is brought to the English-speaking world for the first time. The book links Eugen von Böhm-Bawerk's production theory and Mises's business cycle theory, and gives a pathbreaking account of the role of consumers' goods within the structure of production.

Translated by Hans-Hermann Hoppe, with an extended introduction by Jörg Guido Hülsmann, Capital and Production is the essential foundation, both in theory and in the history of thought, to Austrian macroeconomics.

A small excerpt from the comprehensive introduction by Jörg Guido Hülsmann:

The 1920s and 1930s were a glorious era in the history of the Austrian School of economics. In those days, the city of Vienna saw the first genuine culture of scholars working in the tradition established by Carl Menger, and this culture radiated throughout the rest of the German-speaking world and into other countries.

Many important works of this period have been translated into English, in particular, the books by Ludwig von Mises and F.A. Hayek, and also works of other scholars like Fritz Machlup, Gottfried von Haberler, Oskar Morgenstern, Franz Cuhel, Hans Mayer, Paul Rosenstein-Rodan, and Leo Schönfeld-Illy.

Among the pioneering works of this time that have hitherto not been accessible to the anglophone public is that by Richard von Strigl. First published in 1934 under the title Kapital und Produktion by the former Austrian Institute for Business Cycle Research in its series "Contributions to Business Cycle Research," it was reprinted in 1982 by Philosophia Verlag in Munich under the editorship of Professor Barry Smith.

The English translation is due to the efforts of Professor Hans-Hermann and Mrs. Margaret Hoppe, and it has been made possible by a gift to the Mises Institute by Dr. Mark Skousen. It has been distributed for some time as a typewritten manuscript and is only now being published as a book complete with an index.

In Capital and Production, Strigl seeks to come to grips with the causes and possible cures for the Great Depression that plagued the Western world in the aftermath of 1929. Although many other Austrian economists of the time were engaged in similar projects, Strigl's work stands out for its analysis of time-consuming roundabout production processes and their relevance for the Great Depression. This is what makes the book relevant again at the beginning of the 21st century, at a moment of history marked by the most extraordinary global bull market the world has ever experienced.

Strigl combined Jevons's and Böhm-Bawerk's theory of capital into a genuinely Austrian theory of the economy as a whole; and he carefully analyzed the impact of credit expansion on the workings of this macroeconomy. His treatment of these issues is even more systematic, rigorous, and clear than the well-known works by Hayek that covered the same ground. In fact, Hayek hailed Strigl's work "for the simplicity and clarity of exposition of a notoriously difficult subject."

Capital and Production is therefore not merely of interest for historians of thought. Rather it is a yet-to-be-discovered treasure trove for modern economists who seek to develop capital-based macroeconomics. Strigl's ideas will enrich the current literature in this field and chances are actually high that they will have a greater success now than in the 1930s when the language barrier, political circumstances, and the general intellectual climate prevented them from having any major impact on economists and the public.