The State Is the 1 Percent 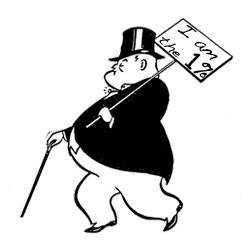 " In fact, that 1 percent includes some of the smartest, most innovative people in the country — the people who invent, market, and distribute material blessings to the whole population. But there is another 1 percent out there…"

The "occupy" protest movement is thriving off the claim that the 99 percent are being exploited by the 1 percent, and there is truth in what they say. But they have the identities of the groups wrong. They imagine that it is the 1 percent of highest wealth holders who are the problem. In fact, that 1 percent includes some of the smartest, most innovative people in the country — the people who invent, market, and distribute material blessings to the whole population. They also own the capital that sustains productivity and growth.

But there is another 1 percent out there, those who do live parasitically off the population and exploit the 99 percent. Moreover, there is a long intellectual tradition, dating back to the late Middle Ages, that draws attention to the strange reality that a tiny minority lives off the productive labor of the overwhelming majority.

Look at the numbers, rounding from latest data. The US population is 307 million. There are about 20 million government employees at all levels, which makes 6.5 percent. But 6.2 million of these people are public-school teachers, whom I think we can say are not really the ruling elite. That takes us down to 4.4 percent.

We can knock of another half million who work for the post office, and probably the same who work for various service department bureaus. Probably another million do not work in any enforcement arm of the state, and there's also the amazing labor-pool fluff that comes with any government work. Local governments do not cause nationwide problems (usually), and the same might be said of the 50 states. The real problem is at the federal level (8.5 million), from which we can subtract fluff, drones, and service workers.

In the end, we end up with about 3 million people who constitute what is commonly called the state. For short, we can just call these people the 1 percent.

The 1 percent do not generate any wealth of their own. Everything they have they get by taking from others under the cover of law. They live at our expense. Without us, the state as an institution would die.

"They do not comprehend that the real enemy is the institution that brainwashes them to think the way they do."

Here we come to the core of the issue. What is the state and what does it do? There is vast confusion about this issue, insofar as it is talked about at all. For hundreds of years, people have imagined that the state might be an organic institution that develops naturally out of some social contract. Or perhaps the state is our benefactor, because it provides services we could not otherwise provide for ourselves.

In classrooms and in political discussions, there is very little if any honest talk about what the state is and what it does. But in the libertarian tradition, matters are much clearer. From Bastiat to Rothbard, the answer has been before our eyes. The state is the only institution in society that is permitted by law to use aggressive force against person and property.

Let's understand through a simple example. Let's say you go into a restaurant and hate the wallpaper. You can complain and try to persuade the owner to change it. If he doesn't change it, you can decide not to go back. But if you break in, take money out of the cash register, buy paint, and cover the wallpaper yourself, you will be charged with criminal wrongdoing and perhaps go to jail. Everyone in society agrees that you did the wrong thing.

But the state is different. If it doesn't like the wallpaper, it can pass a law (or maybe not even that) and send a memo. It can mandate a change. It doesn't have to do the repainting: the state can make you repaint the place. If you refuse, you are guilty of criminal wrongdoing.

Same goals, different means, two very different sets of criminals. The state is the institution that essentially redefines criminal wrongdoing to make itself exempt from the law that governs everyone else.

It is the same with every tax, every regulation, every mandate, and every single word of the federal code. It all represents coercion. Even in the area of money and banking, it is the state that created and sustains the Fed and the dollar, because it forcibly limits competition in money and banking, preventing people from making gold or silver money, or innovating in other ways. And in some ways, this is the most dreadful intervention of all, because it allows the state to destroy our money on a whim.

The state is everybody's enemy. Why don't the protesters get this? Because they are victims of propaganda by the state, doled out in public schools, that attempts to blame all human suffering on private parties and free enterprise. They do not comprehend that the real enemy is the institution that brainwashes them to think the way they do.

They are right that society is rife with conflicts, and that the contest is wildly lopsided. It is indeed the 99 percent versus the 1 percent. They're just wrong about the identity of the enemy.