GET NEWS AND ARTICLES IN YOUR INBOXPrint
A
A
Home | Mises Library | Starvation and Military Keynesianism: Lessons from Nazi Germany 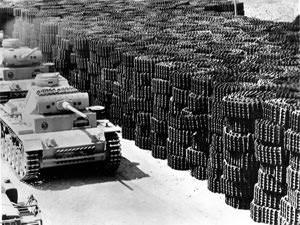 Many Americans, from the Glenview State Bank of Chicago to author Ellen Brown assume that the Nazi economic regime was successful, but closer examination tells a tale of rationing, shortages, and starvation. Learning why their economy failed can teach us how to avoid the same fate.

The myth endures that after Hitler inherited a country ravaged by the Great Depression in 1933, his aggressive policies turned the nation around and created an economic powerhouse. But the truth, as Professor Evans of the University of Cambridge argues in his seminal history The Third Reich Trilogy, is something far different.1  Evans, a Marxist sympathetic to Keynes and state intervention, nonetheless tells a story of rationing, shortages, and misery in the Third Reich. The Reich Food Estate, the state-controlled corporation responsible for agricultural production, regularly failed to feed its people. Agricultural output rarely surpassed 1913 levels, in spite of 20 years of technological advancement. Demand outstripped supply by 30 percent in basic foodstuffs like pork, fruit, and fats. That meant that for every ten German workers who stood in line to buy meat from the state-owned supply depots, three went home hungry.2

The same story was retold when it came to cars, clothing, and iron. New houses had to be built with wooden plumbing, because iron was so scarce. Nationalized iron depots couldn’t produce enough for the army, let alone civilians. Clothing was rationed. Fuel and rubber shortages led to what one US observer called, “drastic restrictions on the use of motor vehicles.”3  Of course, because the state dictated which car and truck models could be produced, there weren’t very many motor vehicles to begin with.

The overall tale is one of misery for the average German citizen. So how did the Nazis so hurt their people, and what lessons can we learn?

Hitler’s rearmament program was military Keynesianism on a vast scale. Hermann Goering, Hitler’s economic administrator, poured every available resource into making planes, tanks, and guns. In 1933 German military spending was 750 million Reichsmarks. By 1938 it had risen to 17 billion with 21 percent of GDP was taken up by military spending. Government spending all told was 35 percent of Germany’s GDP.

Many liberals, especially Paul Krugman, routinely argue that our stimulus programs in America aren’t big enough, so when they fail it’s not an indictment of Keynesianism. Fair enough. But no-one could say that Hitler’s rearmament program was too small. Economists expected it to create a multiplier effect and jump-start a flagging economy. Instead, it produced military wealth while private citizens starved. Employed on the largest scale ever seen, military Keynesianism created only ruin.

Economist Joan Robinson wrote that, “Hitler had found a cure against unemployment before Keynes finished explaining it.” And indeed, rearmament and nationalized industry put every available German to work. There were so many jobs that the Nazis complained of a labor shortage and brought women in to the workplace, even though they were ideologically opposed to it. Unemployment had been cured. And yet, the people routinely suffered shortages. Civilian wood and iron were rationed. Small businesses, from artisans to carpenters to cobblers, went under. Citizens could barely buy pork, and buying fat to make a luxury like a cake was impossible. Rationing and long lines at the central supply depots the Nazis installed became the norm.

Nazi Germany proves that curing unemployment should not be an end in itself. No doubt, jobs are important. But they are important for what they produce, not just by virtue of existing. Real growth means production of what people demand. It means making cars, growing food, building laptops, or commercial planes. Private production grows the economic pie and helps everyone to prosper. Without production, all that a job does is change a man from starving and unemployed to starving and employed.

There are a thousand lessons to be learned from the Third Reich, from the evils of totalitarianism to the dangers of racial thinking. A key economic lesson is that, rather than curing the Great Depression, Hitler’s military Keynesianism on a massive scale left the German people starving and short of goods. It’s a lesson advocates of building tanks to make us rich, from John McCain to Paul Krugman, would do well to learn.4