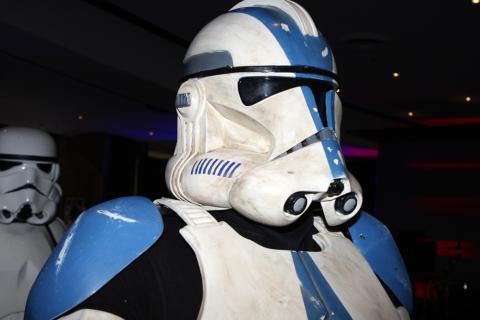 [NOTE: An earlier version of this piece stirred up controversy and comment on all sides. This longer version addresses some of the points made by critics.]

It was peace and prosperity versus taxation, inflationism, protectionism, imperialism, and war. The good guys win this one and people are applauding in theaters throughout the country. The movie of course is "Star Wars: The Phantom Menace," one of the finest allegories on classical liberal political economy to ever appear on screen.

One has to wonder if George Lucas hasn't been reading Ludwig von Mises or Murray N. Rothbard during the long sabbatical that he has taken since his last major movie project. As a wealthy capitalist and businessman, Lucas certainly knows all too well what the government means to wealth and what the market means to the success of complex production processes like a major motion picture.

As the movie opens, the Republic is falling apart due to taxation, protectionism, bureaucracy, and corruption. The Dark Side, accurately labeled the "federalists" (who were the centralizers in American history), is trying to enforce its franchise on trade taxes by trying to intimidate a small peaceful planet that believes in free trade, peace, and republican virtues.

Queen Amidala refuses to pursue any path that might endanger peace and start a war. Her country of the Naboo was at first subjected to excessive taxation and is being blockaded; a path that she rightly fears will lead to war. She attempts to appeal to the central government for an end to the trade restrictions, but quickly discovers that the Republic's Galactic Senate is dominated by bureaucrats and yammering special-interest groups interested only in manipulating the system to their own benefit.

When the legislature proposes to establish a commission to look into the claims that people are suffering, Queen Amidala realizes that established political channels are totally corrupt. She packs her bags for home and prepares to defend her country. What we are watching here are the telltale signs of a decaying empire, where the common good, peace, and liberty are no longer held at a premium.

Along with that–-and consistent with the experience of Imperial Rome and the US–-we see the effects of currency depreciation. This depreciation affects all people who use the money, even in such parched, desert places like Tatooine, where a Jedi warrior tries to exchange credit-based money of the Republic for necessary supplies. He is turned down because the money is no longer valued on the periphery of the Republic. As a result they must resort to barter, which is exactly what Mises said is the final result of inflation.

This is nonsense. What the critics really resent is that this movie draws on existing character types in the real world to make the unfamiliar world it depicts connect more directly with audiences. For example, the Gungas, who live on the other side of Naboo, are caricatures of Jamaicans. Big-government liberals and black leaders have labeled Lucas and his movie racist despite the fact that the Gungas are portrayed as a peaceful, well-organized society who exhibit tremendous courage and a true zeal for life.

"The Phantom Menace" doesn't wallow in politically correct obsessions with dysfunctional families and sociopathic prejudices. Instead, Lucas tells a story about the struggle between good over evil, a struggle well represented in the underlying classical-liberal politics of the movie.

More troubling has been the response from conservatives and classical liberals who have mistakenly interpreted the role of the evil Federal trading association as an attack by Lucus on capitalism. Nothing could be further from the truth.

The Federation is clearly made up of the bad guys. This group of interstellar, mercantilist businessmen blockaded the planet called Naboo and eventually invaded the planet and forced the government to sign a treaty. To some, the idea that entrepreneurs would blockade a solitary and insignificant planet in protest to interplanetary trade taxes just does not make any sense. What would that get them? It just is not rational and has no precedence in human experience.

[The book, which was not written by Lucas and is only based on the screenplay, has a difficult time explaining this curiosity, noting only that the Federation long complained about the taxes, but now had mysteriously taken this different tack of imposing the blockade.]

While the details of political economy are sketchy, Lucus provides numerous details and clues which leave only one possible interpretation. The Federation is a type of East India Company that has been given a tax franchise by the Republic. A tax franchise is when a government gives a private entity or agent the right to collect taxes in return for a hefty percentage of the revenues.

The tax franchise over interplanetary trade is an example of a "public-private partnership," the real "phantom menance" of the film. Throughout history this has been a very common practice when governments find it difficult to collect unpopular taxes in distant lands. It has also been a very lucrative contract to receive because the tax agent takes much more than they are supposed to. It is clearly one of the most evil forms of government because it combines private sector incentives and the monopoly privileges of the state to exploit the taxpayer to the greatest extent possible.

Lucus sends a clear message that the Federation agreement with the corrupt Republic is based on the model of British Imperialism by filling the movie with historical imagery. The Federation is British Imperialism in the form of the East India Company, which controlled and taxed the British possession of the Indian sub-continent. Of course, entrepreneurs complained and evaded British taxes and regulations, but the British Empire gave out monopoly rights to control India and other colonial trading rights in return for tax revenue.

The hints are all there. Naboo sounds like Hindu, the architecture looks vaguely Indian, and Queen Amidala looks and dresses like Indian royalty. The Queen speaks like an Indian speaking very deliberate English.

The Gungas live on the other side of Naboo just as the Jamaica and India were British possessions on opposite sides of the earth. Of course, you might also note that the name of these underwater people, the Gungas, sounds like and is spelled suspiciously like the Ganges. Or how about Gungadin?

Yet the real clincher that the Federation was based on British Imperialism lies in the title of the local leader of the Federation blockade and the one who will rule the planet for the Federation-Republican alliance--viceroy.

Viceroy is of course the British title for colonial leader. British imperialism was largely based on the "company model" where a company, like the British East India Company would be formed and given exclusive trading privileges. The government would get revenue and their proverbial foot in the door in exchange for the monopoly. Later, Britain would provide troops and other means of support and eventually takeover the colony from the company once the profitability had been proven and English-rule had been established.

These public-private partnerships for the taxation and subjugation of the people are the worst of all possible worlds. It is the combination of the efficiency and incentives of a private company with the power and destructive capacity of government. Even Adam Smith, who held a highly lucrative position of tax collector himself, forcefully remarked that "the government of an exclusive company of merchants is perhaps the worst of all governments for any country whatsoever."

Even Karl Marx was right that the wedding of private interest and government results in the exploitation of the people and the ruination of the economy. Conservatives, classical liberals, libertarians and anarcho-capitalists need to be leery of knee-jerk reactions to criticisms of "greedy entrepreneurs."

The good guys win in the end, but not without a great deal of courage, ingenuity, and luck. The movie ends with peace and prosperity being proclaimed to the thunderous applause and celebration of the population.

As the movie makes clear, the good society is based on the rule of law, sound money, free trade, peace, and virtuous leaders who care about the commonwealth more than their own power. Evil is represented by consolidated government and its penchant for corruption, inflation, war, and destruction. Unfortunately, this galaxy so far, far away bears an incredible likeness to one we know all too well.