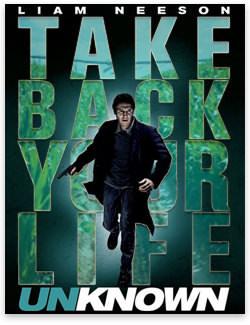 I'm watching the movie Unknown, which is about what happens when a man's identity is stripped away while in a foreign country. Without a passport or any other proof of identity, he is left to wander and then turn to a battle for recapturing who he is. It is a thrilling film in every way, one that taps into a deep anxiety we all have. The whole time, the viewer is thinking: please God, never let me lose my passport!

But as we approach the core of the film, the topic turns (in ways that are unimportant to this article) toward the problem of agricultural patents. This is one in a long line of lefty films that seem to turn on this topic. It was the same with the blockbuster Food Inc., which, for all its annoying and pointless hectoring about the evils of living amidst capitalist plenty, did have one compelling point to make about the injustice and exploitation of agricultural patents.

Such ridiculous patents had no part in the whole history of humanity. As Boldrin and Levine write,

until the early 1970s animal and plant species innovation flourished without much in the way of protection from intellectual monopoly. Breeders would develop a new plant variety, the initial seeds of which were sold to farmers at relatively high prices. Farmers were then free to reproduce and resell such seeds on the market and compete with the initial breeders, without the latter bringing them to court.

In fact, some bozo tried to patent a species in 1889, but the patent commissioner rejected it as "unreasonable and impossible." Exactly. But this changed in stages. The Plant Patent Act of 1930 provided very narrow coverage, which was later extended in the 1950s. Then in 1970 the Plant Variety Protection Act extended such protection to plants that are sexually reproduced. Then between 1980 and 1987 patent protection was for the first time extended to the products of biotechnology. Then all hell broke loose as seeds and species and even genetic codes came to be monopolized by private parties holding government privileges.

The tragedy for defenders of the free market is that these monopolies have handed socialists the best case they've ever had to rail against capitalistic exploitation. After all, we are dealing with the staff of life, the very core of the human problem (how to feed ourselves), and this has hit the sweet spot of socialistic bias. We have something here that has always been universally available, a free good for all, that has been transformed by private lobbying into a scarce commodity that has led to countless billions in profits for a handful for monopolists like Monsanto and Dupont, who spend their billions lobbying to keep their privileges and fighting those who would dare trespass on their proprietary "ownership" of knowledge.

It sounds like a nightmare that only a socialist could invent to feed his or her paranoia about private producers. Think of it this way. Let's say you go to a restaurant and have a lemon cheesecake. You love it, so you reverse engineer it in your mind and make it at home to serve a Tupperware party. As soon as the party starts, jack-booted thugs arrive wielding guns and drag you away as a criminal for stealing a recipe. The cook is dragged away, same as a real thief or murderer.

"The tragedy for defenders of the free market is that these monopolies have handed socialists the best case they've ever had to rail against capitalistic exploitation."

That is the short version of what has happened to the food and agriculture industry over the last 30 or so years. Again, this is after a whole history of humanity somehow getting by without central planners working with private monopolists to cartelize what was once part of the bounty of human experience: the knowledge of how to grow and cultivate things that permit human flourishing.

In the movie in question, the monopolists are pictured as thugs and killers who will stop at nothing to prevent a new method for growing corn from becoming part of the commons. A scientist works with an Arab prince to release the recipe to the world, but the goon squads plot and plan a series of assassinations to stop this.

It may sound crazy but there is actually a plausible scenario here. For it is impossible these days to otherwise release innovative recipes into the commons: as soon as they are known, they can be patented, and the patent holder is thereby permitted to use coercion against any competitor, even the one who first came up with the idea.

In general, it strikes me that supporters of the free market have underestimated the extent to which the socialists have made hay from the case of agri-patents. Here is the thing. Socialism in real stuff is a nutty idea that leads to disaster, as the whole of modern experience shows. But there is one area in which common ownership does make sense and that is the area of knowledge, which is not a scarce good but rather an infinitely copyable good.

Producers are free to try to keep their knowledge under wraps, but the very public nature of markets mitigates against that. As Maria Montessori wrote in Education and Peace (1937),

there is no discovery — not even the most minor intellectual advance — in any corner of the world that does not soon become known from one end of the earth to the other, like liquid in connecting vessels that seeks a common level.

Such is the way that free markets provide a kind of Taoist-like balance to the world order. Scarce goods are rationed by necessity (the Yin), while nonscarce goods like information are provided as free and held as the common possession of humanity (the Yang). The free goods take the edge off the rationed goods, and, working together through voluntary exchange, the market serves the cause of peace and prosperity, giving us the best of all possible worlds at all times.

Government intervention upsets the balance by using coercion to make free goods artificially scarce and thereby inflating the scarce-goods sector to take on a significance that the market would not otherwise support. The reality becomes grist for the socialistic mill and the Left can point to this as an incidence of how they believe the whole world works: private owners bashing others to extract an unfair share of the world's wealth (same as they wrongly point to the armaments industry as an example of capitalism).

The core of the Misesian critique of socialism is that scarce goods cannot be held in common because the price system that provides rational economization gets destroyed under those conditions, thereby resulting in chaos. Mises's argument did not apply to those things like knowledge that need no economization. So, yes, there can be "socialism" in the formulas that go into making seeds. But the products of those seeds and the seeds themselves need markets to be produced and distributed.

It is the government regulations that conflate all these categories and lead to the ideological confusions of our time. Agricultural patents are indeed an evil, but they are not an evil of the market; they are an evil of government intervention. If the movie Unknown were to live up to its title, it would have made some effort to point this out. Instead, it ends only in sowing confusion of the same type sown by all government interventions. We are led to believe that the capitalist order is sustained only by violence and conspiracy, whereas the truth is that the real energy of the free market derives from the glorious and civilized principle of mutual agreement.