Smash Capitalism and You Destroy Civilization 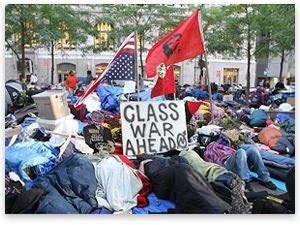 10/24/2011Art Carden
"We have already had this conversation. The 20th century was a long (and bloody) debate about alternative modes of social organization."

Somewhere, there are two graduate students in the social sciences who need dissertation topics. Those students should be watching the Occupy Wall Street movement with keen eyes, because, as it evolves, it's going to provide us with an interesting set of applications, illustrations, and tests of different principles in the social sciences. One student should study the on-the-ground evolution of the occupation camps themselves. Another should look at the evolution of perceptions of the occupations and how they have changed as data on the occupiers' views have emerged.

Former Clinton pollster Douglas Schoen has done a valuable service by assembling a poll — which he discusses in the Wall Street Journal — that "probably represent(s) the first systematic random sample of Occupy Wall Street opinion." According to Schoen, the occupiers are united by "a deep commitment to left-wing policies."

I agree with the occupiers when we both answer "no" to a question like "should we bail out large financial institutions that have made a lot of bad investments?" The more radical occupiers lose me with demands that we "smash capitalism" and "abolish private property." It isn't at all clear to me that they have thought through exactly what this would entail.

Perhaps they see this as the beginning of an anticapitalist, anticommercial revolution, but to a certain extent we have already had this conversation. The 20th century was a long (and bloody) debate about alternative modes of social organization. Even in its present corrupted and cronyized form, "modern capitalism" — which Deirdre McCloskey defines loosely as "private property and unfettered exchange" — is a goose that lays golden eggs, and not merely for the super rich. If you disagree, ask yourself how many of those claiming to speak for "the 99 percent" have smart phones, which Louis XIV couldn't have bought for all the gold in France. The problems the occupiers blame on "capitalism" were not caused by "private property and unfettered exchange." They were caused by institutionalized interference with "private property and unfettered exchange."

At the margin, a little more government intervention isn't likely to make a huge difference. I expect long-run problems that won't surface until long after its main proponents and sponsors are out of office, but ObamaCare by itself isn't going to turn the United States into North Korea. Nonetheless, we can't discard what economics has to teach and expect civilization to endure. Ludwig von Mises, one of the 20th century's most prominent defenders of the classical-liberal order, finished his magnum opus Human Action with this:

The body of economic knowledge is an essential element in the structure of human civilization; it is the foundation upon which modern industrialism and all the moral, intellectual, technological, and therapeutical achievements of the last centuries have been built. It rests with men whether they will make the proper use of the rich treasure with which this knowledge provides them or whether they will leave it unused. But if they fail to take the best advantage of it and disregard its teachings and warnings, they will not annul economics; they will stamp out society and the human race.

Things were much darker when Mises wrote that (1949) than they are today, but we are only a few years away from graduating the first class of college seniors that hadn't yet been born when the Soviet Union collapsed. It has been said that those who do not learn from the past are doomed to repeat it. We would do well to study the intellectual, political, social, and economic history that made Mises write with such urgency and passion lest we be doomed to repeat it. Tragically, that's exactly what will happen if those who urge us to "smash capitalism" and "abolish private property" get their wish.

This article originally appeared on Forbes.com on October 21, 2011.