Slaves to the Marshall Myth 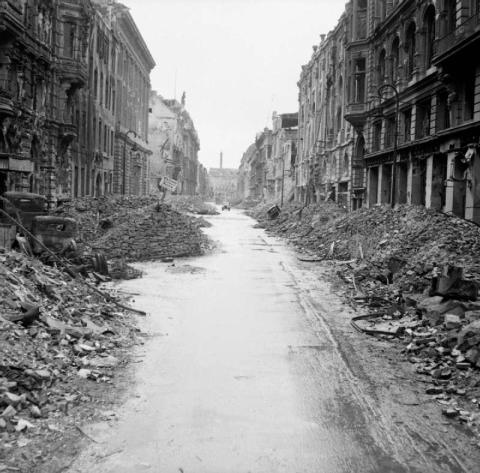 Of all the myths that persist concerning economic history, the myth that the United States rebuilt Europe and Japan following the Second World War is among the most popular. While there is considerable disagreement concerning other myths, like the notion that FDR saved us all during the Great Depression, the myth of the Marshall Plan enjoys wide support.

This fact has been made all-too-apparent in the Bush administration's dealing with Iraq and Afghanistan. Of the $87 billion approved for ongoing operations, $21 billion will go to supplying "public goods" to the people of these nations.

As Bush put it in his announcement: "America has done this kind of work before. Following World War II, we lifted up the defeated nations of Japan and Germany, and stood with them as they built representative governments. We committed years and resources to this cause. And that effort has been repaid many times over in three generations of friendship and peace. America today accepts the challenge of helping Iraq in the same spirit—for their sake, and our own."

And again at the United Nations: "we are rebuilding more than a thousand schools . . . we have helped to supply and reopen hospitals across Iraq . . . we are rehabilitating power plants, water and sanitation facilities, bridges and airports. I proposed to Congress that the United States provide additional funding for our work in Iraq, the greatest financial commitment of its kind since the Marshall Plan."

What is the basis for believing that these goals require Federal subsidies? One could argue that Iraq is a poor country, and cannot afford to provide basic public needs, at least initially. This is false. Aside from the obvious fact that Iraq has large oil reserves that it can sell to raise funds, there are clear examples of nations without extensive natural resources succeeding under worse circumstances.

Following the Second World War, West Germany, Hong Kong, and Japan were in worse shape than Iraq is today. Unlike the recent war in Iraq, cities in these nations were nearly leveled. Indiscriminate bombing by the United States, Royal, and Soviet air forces left these nations in ruin. These nations had very little in the way of natural resources to sell to begin with, and the war devastated much of what had been built.

Hong Kong rebuilt with minimal governmental interference (Rabushka 1979). This resulted in rapid economic development and a steadily rising standard of living for the people of Hong Kong. This progress benefited not only highly skilled upper income workers, but also low paid unskilled workers.

This success came to the people of Hong Kong because of low taxes, minimal tariffs and regulations, and without the redistribution schemes of democratic welfare states or large-scale foreign aid. The key source of foreign aid came from English authorities who provided security to Hong Kong, but left the people of this place to sort out their own personal affairs in private markets.

West Germany rebuilt itself in a similar fashion. Marshall Plan aid consisted of only a tiny percentage of German GDP. Also, the money that West Germany paid in reparations offset Marshall Plan aid. West Germany received military defense from the U.S. and England, but paid substantial fees for this service. The German Economic Miracle began with a radical program of privatization and deregulation, beginning in 1948. This ended the regulatory controls and elaborate tax system imposed by Hitler and his National Socialists.

Foreign aid had, at best, minimal influence on the West German revival. A free and nondemocratic Germany experienced a strong recovery. If there was anything wrong with the German approach, it is that it allowed for future extensions by the government into private markets.

Japan also experienced great success due to a relative lack of governmental interference (Henderson 1993). Low taxes and high savings rates translated into strong economic growth in postwar Japan. Once again, foreign aid and intervention were too small to have accounted for this success. Japan did not need massive intervention to recover, even though it lacked the natural resources that Iraq possesses in its oil fields.

These examples are by no means special cases. General principles in economics tell us that these cases are the norm, rather than exceptions to some rule. As Ludwig von Mises taught us, efforts to centrally plan government do not proceed on the basis of economic rationality. The common ownership of resources precludes our learning how to best employ them in satisfying consumer demand. The belief in an omniscient state optimally employing scarce resources is, as Mises wrote, false.

Political "rationality" takes the place of economic rationality in governance. As Mancur Olson taught us, collective action problems imply that special interests will direct public policies to their own ends.

This is evident in recent Iraqi history. Foreign aid to Saddam Hussein during the 1980's served only to empower his government and enrich Hussein and his cronies, while ordinary Iraqis, especially Shiites and Kurds, suffered from poverty and the brutality of the government.

Iran is another example of how foreign aid goes to narrow interests in the government, rather than to promoting the general economic well-being. The U.S. supported the Shah and his cronies for decades, and eventually earned the enmity of the Iranian people as this corrupt regime abused its U.S. backed power.

George Bush may well be planting the seeds of the next round of political misadventures with his plan for foreign aid for Iraq and Afghanistan. What real basis is there for President Bush's plan to aid these nations? Has the president performed the proper calculation to see if this aid will promote economic efficiency? Bush's record seems so far to be in line with that of other politicians in the past. Well-connected special interests—those with ties to President Bush—are benefiting the most from the postwar efforts to rebuild Iraq. Why should we not also expect politically connected special interests in the newly emerging Iraq to do the same?

There can be no doubt that the old regime in Iraq was horrible. The Hussein regime was a classic example of how the worst get on top of any system where the government attempts to control and plan the entire economy.  As FA Hayek taught us (1945), those who are best at wielding power are the most brutal, rather than the most humanitarian, people among us. President Bush surely means well in his efforts to build a new Iraqi government and in supplying billions in aid to it, but he will likely empower a new political elite with this policy. This new elite need not be as tyrannical as the Hussein regime, but it may not be much better, and will hardly be capable of promoting economic efficiency.

Given the well-established record of political mismanagement of resources and abuse of authority, President Bush should consider other options. Can private markets supply basic public goods? This notion might seem odd, but the public goods he mentioned—roads, schools, security, and hospitals—are not as public as some might think.

Of course, the private sector does not supply these services perfectly. However, private supply does exist, and there is much evidence to show that it does so more effectively. The public supply of schools, roads, hospitals, and security is far from perfect. As an example, we can look at the persistence of failed public schools.

Theory and history both indicate that the free market delivers economic efficiency and personal liberty. They also tell us that the politicization of society has dire consequences. President Bush's speech on Iraq indicates that he believes otherwise. The basis for this belief of his is not at all clear.

President Bush clearly knows the rules of politics well. The massive spending he has favored and pushed through Congress is neither necessary nor desirable. Hopefully he will learn more about the rules of economics in the future, and act upon them accordingly.

Hayek, F.A. 1945. The Road to Serfdom. University of Chicago Press.

Henderson, David. 1993. The Myth of Miti The Fortune Encyclopedia of Economics.