GET NEWS AND ARTICLES IN YOUR INBOXPrint
A
A
Home | Mises Library | Should Congress Raise the Debt Ceiling?

Should Congress Raise the Debt Ceiling? 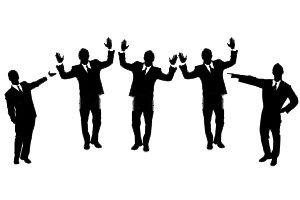 At current rates of spending, the federal government may bump up against its debt limit as early as March. Treasury Secretary Timothy Geithner warns that it will be "catastrophic to the economy" if Congress doesn't increase Uncle Sam's credit limit. Writers in conservative outlets call for Republicans to use this opportunity to extract significant spending cuts before extending the limit. And some extreme libertarians argue that the debt ceiling shouldn't be raised, because a government default would be a good thing for the American people.

In this article I'll explain the basic situation and comment on each of these views.

Uncle Sam Has Painted Himself into a Corner

Ever since 1917, Congress has allowed the Treasury the discretion to issue new debt (i.e., borrow money from other agencies or individuals). At that time, the thinking was that the executive branch needed the ability to make quick financing decisions to fund the war effort. However, Congress didn't want to completely cede its control of the purse strings, and so it set a cap on how much total debt the Treasury could owe at any given time.

After the first World War, the US government really did sharply slash spending, and in fact the Coolidge administrations retired a sizable portion of the debt. But ever since Herbert Hoover's fateful presidency, the federal debt has mushroomed, and the growth during our financial crisis has been breathtaking: 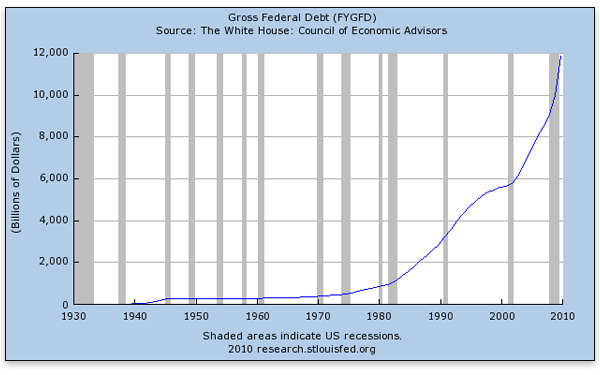 Currently the statutory debt ceiling is $14.294 trillion. As of January, the actual debt stood at slightly more than $14 trillion. At present rates of spending, and with projected revenues flowing into federal coffers, analysts estimate that the feds will hit their credit limit somewhere between late March to May.

Before continuing with the analysis, we should make an important distinction: The figures above refer to the "total federal debt," which includes "intragovernmental debt." However, when economists discuss things like a given country's "debt-to-GDP ratio," they use a smaller figure, counting only the "total debt held by the public." For the United States, this smaller figure (as of December) was $9.4 trillion, because $4.6 trillion of the debt was actually held by other government agencies such as Social Security.

Whether to include the "intragovernmental debt" in the total figure depends on the context, but to the extent that one doesn't view the Social Security "trust fund" as a genuine asset, then by consistency one also shouldn't get too worked up about the Treasury's obligations to the "trust fund." If the Treasury defaulted on that portion of the debt, what citizens lost in Social Security checks would be offset dollar-for-dollar by reductions in interest payments on the federal debt.

On the other hand, one could argue that there are important differences across individuals — some are counting on Social Security for their retirement, while others have large incomes and pay significant amounts to the IRS to service the federal debt. We shouldn't just lump everyone into a common pool of "citizens." (After all, it would be absurd to argue, "A federal default on all its debt would be a wash, because the group 'all Earthlings' would see counterbalancing gains and losses.")

But if we are going to insist that the Treasury securities held by the Social Security trust fund, and all other intragovernmental debt, are just as legitimate as the Treasury securities held by private investors, then we need to reckon the federal debt as 95 percent of GDP. This is much higher than the figure of about 64 percent that the press commonly reports (using the official third quarter 2010 rate). In other words, the only way to "save" Social Security and other cherished programs — by insisting that we treat their holdings of Treasury debt as legitimate assets — is to simultaneously make the "national debt" that much worse.

The Case for Hysteria

Naturally, Geithner and other spokespeople for the executive branch argue that the world will end if Congress doesn't give them permission to run up more red ink. In particular, they claim that without the ability to borrow from new lenders, the Treasury won't be able to meet its existing obligations, including interest and principal payments on already-existing debt. According to these warnings, it would devastate the world financial markets if the US Treasury defaulted, and so Congress should stop playing politics and raise the debt ceiling like adults.

If Default Is So Bad, Then Don't Default!

Even on their own terms, however, these warnings make a convenient leap from "no increase in the debt ceiling" to "Treasury default." As Michael Tanner points out,

If the debt ceiling is not increased, the Treasury can prioritize interest and debt payment to avoid a default and essentially put the government on a stringent pay-as-you-go basis. Would that involve extreme cuts in government spending? Certainly. But it could be done, if it had to.

Let's remember that the Treasury still rakes in quite a bit of money in revenues — it took in $604 billion (seasonally adjusted) in the third quarter of 2010. In FY 2010 the annual debt service was some $414 billion, working out to an average of about $104 billion per quarter. Although the numbers won't be quite the same going forward, the debt service will soak up only about one-sixth of the incoming revenues.

So there is plenty of cash flow for the Treasury to honor its existing debts, if a default would really be that catastrophic. Also keep in mind that even if the debt ceiling weren't increased, the Treasury could still roll over its debt as existing bonds matured. The only thing the Treasury couldn't do would be to issue more debt.

Finally, why take it for granted that a Treasury default would be so awful? As Jeffrey Rogers Hummel argues, there is both a moral and an economic case to be made for repudiating Uncle Sam's debts:

The moral argument for repudiation is easiest to follow although by itself [it] says nothing about the practical results. Treasury securities represent a stream of future tax revenues, and investors have no more just claim to those returns than to any investment in a criminal enterprise. I favor total repudiation of all government debt for the same reason I favor abolition of slavery without compensation to slaveholders.

The economic argument depends on whether Ricardian Equivalence holds.1 Repudiating government debt eliminates future tax liabilities. To the extent that people correctly anticipate those liabilities, the value of private assets (including human capital) should rise over the long run by the same amount that the value of government securities falls. Thus, people will gain or lose depending how closely their wealth is associated with the State. If on the other hand, people underestimate their future tax liabilities, they suffer from a fiscal or "bond illusion" in which Treasury securities make them feel wealthier than they actually are. Debt repudiation will bring their expectations into closer alignment with reality, which should increase saving.

When I survey students in my classes, most of them claim to have no realistic expectation that social security will be there for them when they retire. If they are being honest, and they act on this belief as they earn income, then Ricardian Equivalence should hold for those liabilities, making any default less painful.

Perhaps the strongest argument for not raising the debt ceiling is that the United States is bound to default — whether explicitly by reneging on payments, or implicitly by massive inflation — at some point anyway in the next decade or two. The government's own projections show the debt quickly rising to alarming levels under certain assumptions, and none of their models deals with the possibility of a continued depression and a collapsing dollar.

As others have noted, a firm debt ceiling would be a "balanced-budget amendment with teeth." Politicians notoriously cannot recommend particular budget cuts for fear of alienating powerful interest groups. But if the newly elected budget "hawks" really wanted to impress us, they could refuse to raise the debt ceiling. Then they and their colleagues would have no choice but to start slashing.