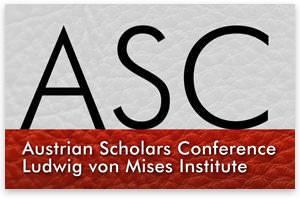 When the first Austrian Scholars Conference was held in 1992, we were at the very beginning of the Great Bubble Economy, brought to you by Alan Greenspan and Ben Bernanke and their associates at the Fed. This shiny, bubbly "new economy" has finally gone the way of all bubble economies in history, deflating into stale dishwater and swirling slowly but surely down the recessionary drain. But it has left in its wake something truly amazing, something that never could have been foreseen: a second Austrian revival.

The first Austrian revival blossomed in 1974 as a result of the conjunction of two unique events. In June, a group of 50 Austrian economists and graduate students met in the tiny hamlet of South Royalton, Vermont. (Some participants still swear that the place was haunted, but that is a story for another day.) In October, Friedrich A. Hayek, a protégé of Ludwig von Mises and an eminent economist in his own right, was awarded the Nobel Prize in economics for his pathbreaking theoretical work on money, capital, and business cycles. But despite these events, Austrian economic theory did not leave much of an impression on mainstream economics. Nor did it make inroads into the economic journalism and financial commentary of the day.

Hayek and Murray N. Rothbard, Mises's preeminent American follower, were relegated to the "soft" areas of economics, like methodology, political economy, and social philosophy. True, some mainstream economists did admit that the Austrians had insightful criticisms of positivist methodology and that they made a provocative, albeit extreme, case against socialism and for the free-market economy. But Austrian economic theory itself was either completely ignored or dismissed out of hand as backward and outmoded. Thus many young Austrians soon abandoned research in technical economic theory altogether and drifted off into methodology and comparative economic systems, where they could at least get a hearing for their views. Unfortunately, the lofty theorists of the mainstream considered these areas the intellectual backwaters of economics, whose inhabitants were mere essayists.

"Recognizing the inability of their sophisticated models to predict or even explain the financial collapse and subsequent Great Recession, leading macroeconomic theorists of the day have lapsed back into raw and simplistic Keynesianism."

All that has now changed with the sudden implosion of the false prosperity that was built upon more than a decade of low interest rates and fiat-money inflation. Without a landmark conference or the fanfare of another Nobel Prize winner, a second Austrian revival has grown spontaneously out of the failure of mainstream macroeconomists to adequately explain the inflation and bursting of the high-tech and real-estate bubbles. The subsequent collapse and the Fed bailout and virtual nationalization of the entire financial sector also caught the macroeconomists completely unawares, overturning their theory of central banking and monetary-stabilization policy that had been so carefully developed in countless journal articles since the 1980s.

We can date the second Austrian revival almost precisely to the fall of 2008. From that point on, the use of online Austrian resources on Mises.org abruptly doubled from one year earlier, as investors, media commentators, and the public at large frantically sought answers from all quarters while witnessing one iconic financial institution after another topple into bankruptcy. In addition, the Austrians have benefitted from bestselling books, public figures who champion their cause, prominent financial experts who defend the Austrian point of view, new research tools made available via digital media, and a burst of new interest from a new generation.

But happily, unlike the first revival, the second revival of Austrian economics has focused on the economic theory of Mises, Hayek, and Rothbard. Paul Krugman and Brad DeLong, two prominent ultra-Keynesians, now felt compelled to learn about and try to refute the Austrian theory of the business cycle. Other macroeconomists such as Lee Ohanian of UCLA were inspired to reexamine the historical record and found that Rothbard was right about the causes of the severity of the Great Depression. In an article published in one of the leading mainstream theoretical journals, the Journal of Economic Theory, Ohanian concluded,

My analysis also provides a theory for why low nominal spending — deficient aggregate demand — generated such a large depression in the 1930s, but not in the early 1920s, which was a period of comparable deflation, but when industrial firms cut nominal wages considerably. In the absence of Hoover's program, my analysis indicates that the Depression would have been much less severe. The 1930s would have been a substantially better economic decade had the government not adopted programs that artificially raised real wages in industrial labor markets and prevented those markets from clearing.1

Recognizing the inability of their sophisticated models to predict or even explain the financial collapse and subsequent Great Recession, leading macroeconomic theorists of the day have lapsed back into raw and simplistic Keynesianism. They call for ever more fiscal and monetary stimulus via massive deficits and zero interest rates. These traditional stimulus policies have failed to ignite a strong recovery even though they were implemented on a massive scale.

But the manifest failure of such policies does not give their proponents pause; it only incites them to propose ever more bizarre schemes. One such proposal is inspired by the monetary crank Silvio Gesell, who Keynes once called a "strange, unduly neglected prophet." The modern version of Gesell's plan calls for a tax on the public's bank deposits and currency holdings as a means of driving nominal interest rates below zero and thereby stimulating total spending.2

"Fear the Boom and Bust" a Hayek vs. Keynes Rap…

The only coherent alternative to this antiquated Keynesianism and monetary crankism is Austrian monetary and business-cycle theory. It is the 1930s revisited. The dust has settled, and the wreckage of modern macroeconomics has been cleared, and once again the Hayekians face the Keynesians across the intellectual battlefield. Indeed this message has been brought home even to the layperson in the recent online Keynes–Hayek rap-video sensation, "Fear the Boom and Bust," produced by John Papola and Russ Roberts.

It is important to note that the renewal of interest in Austrian theory might have never occurred or quickly fizzled out if the resources had not been available to support it. These intellectual resources were provided by the Mises Institute, which almost singlehandedly kept the Austrian tradition in monetary and business-cycle analysis alive.

Examples abound. Rothbard's America's Great Depression was kept in print, and a second edition of his Mystery of Banking was brought out in 2008. Prices and Production and Other Works, a collection of Hayek's most important theoretical writings, many long out of print, was published in 2008. This was followed by A Tiger by the Tail in 2009, a compact collection of excerpts from Hayek's work, tailored to a popular audience. The Mises Institute also published fresh perspectives on Austrian macroeconomics, most notably Jesús Huerta de Soto's treatise on Money, Bank Credit, and Economic Cycles, published in 2006 and, in a second edition, in 2009. In addition, the Mises Institute has made available online almost all the important works in Austrian economic theory that have been published since the founding of the school by Carl Menger in 1871.

The result of all this material and intellectual preparation is that the battle between the Austrians and Keynesians is likely to turn out very differently this time around. The Austrians are well armed with sound and true theoretical weapons that have been renewed and enhanced since the clashes of the 1930s. Keynesianism in all its variations has been repeatedly tried and found wanting. It has lost its tactical advantage: it is no longer new and never was true. Its intellectual leaders are in a state of disarray and confusion. The long run is at hand for Keynesianism, and it is ready to be interred.

So this year the Austrian Scholars Conference marks something very special. We gathered, not just to teach and learn from one another, but to set the agenda for the future of economic science.

This article is adapted from introductory remarks delivered by the first coauthor at the Austrian Scholars Conference, March 11–13, 2010, Auburn, Alabama. Both the oral remarks and the written article are joint products of both coauthors.