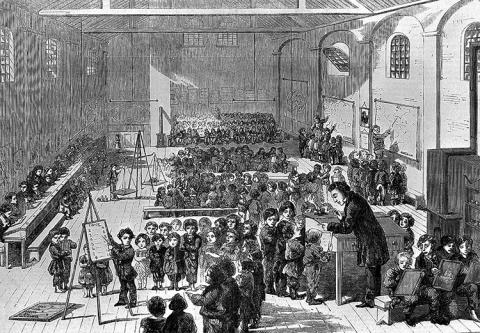 School vouchers have been sold as a winning way to give parents a choice of how to educate their kids. But vouchers may come with government strings attached.

At least, that's the lesson from Milwaukee's school choice program.

The Wisconsin Supreme Court in June OK'd the plan, which the state Legislature had approved years earlier. The public school lobby, backed by the American Civil Liberties Union, may appeal to the U.S. Supreme Court.

For now, though, the program goes on. And pro-voucher players are happy.

"It's a great victory," said Charles Glenn, an education professor at Boston University.

While no doubt a victory for voucher supporters, the ruling opens the door to something else: more government control over Milwaukee's private schools.

Already, more than 300 pages of state and federal rules have been dropped on the program. Those rules govern admissions, eligibility, "religious activities," student rights, curriculum standards, teacher certification and accountability, among other things.

"They are going to look just like public schools," Milwaukee Public Schools Superintendent Alan Brown said of the private schools that take vouchers.

That wasn't the intent. For those who support vouchers, the rules are ominous.

"There's always a risk, (and) I prefer to see those restrictions removed.... I prefer unrestricted, universal vouchers," Nobel-winning economist Milton Friedman, an active supporter of the Milwaukee plan, told IBD.

The Milwaukee Parental Choice Program will let up to 15,000 kids from low-income families go to the schools of their choice. Each student gets a voucher worth about $4,900.

The vouchers will help kids who come from Milwaukee's poorest neighborhoods.

"You're empowering the worst-performing kids to do better," said Richard Komer, a senior litigator at the Washington-based Institute for Justice, a pro-voucher legal group that represents Milwaukee families.

Said Glenn, "If we want to extend opportunities to poor kids and begin to reverse the absolutely devastating education that they're getting, we have to have such arrangements, even if there are risks involved."

Even though government involvement is inevitable with public-funded vouchers, they may be "a way out for motivated low-income people who don't have a way out," James said.

Private schools must select students on a "random basis."

Under an "opt-out" rule, private religious schools can't force students with vouchers to take part in religious activity at the schools.

Kids already in private school cannot get vouchers unless they are in kindergarten through the third grade "and meet certain income requirements."

"The inability to pick and choose among students...is one of the reasons public schools are in trouble," said Lew Rockwell, director of the free-market Ludwig von Mises Institute. "Apply the same rule to private schools, and you go a long way toward making them carbon copies of the schools so many are anxious to flee."

Also, the voucher money doesn't go to kids of "middle-class people who actually pay the taxes that support the public schools," Rockwell said. Instead, it goes only to "those the government defines as 'poor.'"

That group already gets big subsidies for health care, housing, day care and food. "Vouchers represent not a shrinkage of this welfare state but an expansion, the equivalent of food stamps for private school," Rockwell said.

"The schools that participate behave exactly as government schools do. They have no say over who they accept or reject - they lose control over their enrollment," the source, who spoke on condition of anonymity, told IBD.

Also, the "opt-out" rule lets kids choose not to take part in religious activities, which may be broadly defined. Is having a crucifix in a classroom or a prayer before math class a religious activity?

"It's a kind of gag order in religious schools about God," said the former Education Department official.

Religious schools in Milwaukee that want to take part in the program are worried, says Howard Fuller, former superintendent of Milwaukee Public Schools and now a Marquette University education professor.

Fuller says the worry is over the 300-plus pages of rules that the Milwaukee Public Schools managed to slap on the program.

"None of these regulations were required by the legislature," Fuller said. "And if there's enforcement of these laws, then we'll have a reluctance on the part of some of the (religious) schools to get involved. Then we'll never know whether this experiment will work because we'll have a program but few sectarian schools will join in."

Dan McKinley, head of Partners Advancing Values in Education - a pro-voucher group - also worries that the Wisconsin Department of Public Instruction may try to push its luck.

The DPI is charged with overseeing the program and each school's random admission policy.

"DPI believes that every student entering a private school retains the same rights as a public school student," McKinley said.

While the DPI has been cooperative, he said, it has issued a "whole list of student rights that come mainly from federal statutes that the (voucher) schools are supposed to sign off on."

These rules forbid single-sex schools. There are five such private schools in Milwaukee. The rules also include provisions for disabled kids, which some private schools may not be able to afford.

"The purpose of the choice program was not to make the private schools public schools," Fuller said.

Despite the problems, voucher supporters are optimistic.

"The bottom line is that it's the schools' decision" whether to participate, said Clint Bolick, director of the Institute for Justice.

Said his colleague Komer: "The ultimate goal is to move to a system of pure choice for everyone. It's largely a question of, How do we get from here to there?"

"The one saving factor is that the private schools can drop out if they feel that the state government is becoming too regulatory," he said.

Glenn predicts the program will fuel competition between private and public schools. This will give each school greater focus, he says.

But some--including Friedman --believe vouchers are just a half-step toward real reform. They ask: Why have government involved in education at all?

Sheldon Richman, an author who has written extensively on school choice issues, agrees. He notes support for voucher programs is often couched in terms of "social justice."

"Poor people don't have the same choices in cars or country clubs or restaurants," Richman said. "Should we have vouchers across the board? All of a sudden they're egalitarian."