GET NEWS AND ARTICLES IN YOUR INBOXPrint
A
A
Home | Mises Library | Salute to Von Mises: For 92 Years He Has Fought the Good Fight

Salute to Von Mises: For 92 Years He Has Fought the Good Fight 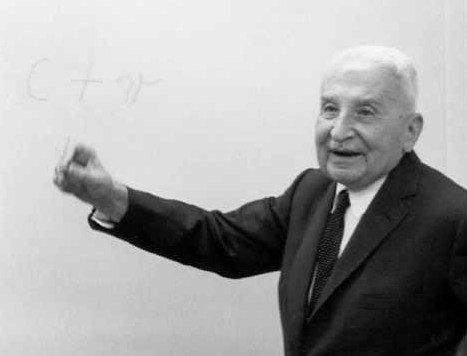 (Reprinted by courtesy of Barron’s National Business and Financial Weekly, October 1, 1973 issue, and with permission of Dr. Henry Hazlitt.)

Last Saturday marked the 92nd birthday of Ludwig von Mises, the greatest analytical economist of his generation. He has also been one of this century's ablest champions of private enterprise and the free market.

Those 92 years have been amazingly fruitful. In conferring its Distinguished Fellow award in 1969, the American Economic Association credited Mises as the author of 19 volumes if one counts only first editions, but of 46 if one counts all revised editions and foreign translations.

But such honors, even taken as a whole, seem scarcely proportionate to his achievements. If ever a man deserved the Nobel Prize in economics, it is Mises. But in the few years of its existence, that award has gone to a handful of so-called "mathematical economists"-in large part, one suspects, because only a parade of unintelligible mathematical equations impresses the laymen responsible for finding laureates as being truly "scientific," and perhaps because granting it to economists primarily for their mathematical ability relieves the donors from seeming to take sides in the central political and economic issues of our time – the free market versus government controls and "planning," capitalism versus socialism, human liberty versus dictatorship.

Ludwig von Mises was born on September 29, 1881, in Lemberg, then part of the Austro-Hungarian Empire. He entered the University of Vienna in 1900, studied under the great Eugen von Bohm-Bawerk, and acquired his doctorate in law and economics in 1906. In 1909, he became economic adviser to the Austrian Chamber of Commerce, a post he held till 1934.

In 1913, following the publication of his Theory of Money and Credit the preceding year, he was appointed professor of economics at the University of Vienna, a prestigious but unpaid post that he also held for 20 years. His famous seminar in Vienna attracted and inspired, among others, such brilliant students as F. A. Hayek, Gottfried Haberler and Fritz Machlup.

In 1934, foreseeing the likelihood that Hitler would seize Austria, Mises left, advising his students to do the same. He first became professor of international economic relations at the Graduate Institute of International Studies in Geneva. In 1940, he came to the United States.

Mises was already the author of more than half a dozen books, including three masterpieces, but only one of these, Socialism: An Economic and Sociological Analysis, had been translated into English. So Mises was practically unknown here, and, as the fashionable economic ideology then was Keynesianism and its New Deal offspring, he was shrugged off as a reactionary.

Gaining an academic appointment proved difficult. Turning to books, he wrote Omnipotent Government, a history and analysis of the collapse of German liberalism and the rise of nationalism and Nazism. It was not until 1945 that he became a Visiting Professor at the Graduate School of Business Administration of New York University, a post he held until 1969.

His body of work is large and impressive. But we can confine ourselves here to considering two of his three masterpieces – The Theory of Money and Credit, which first appeared in German in 1912; Socialism, originally in German in 1922; and Human Action, which grew out of a first German version appearing in 1940.

Mises also saw the fallacies in the proposals of the so-called monetarists, that "the price level" could or should be stabilized by government managers who increased the quantity of money by a certain percentage every year. He saw that inflation cannot be automatically controlled – that because of its changing effects on expectations, an increase in the quantity of money, in its early stages, tends to increase prices less than proportionally; in its later stages, more than proportionally.

Mises also rejected the simplistic concept of "the price level." He pointed out that increases in the quantity of money do not raise all prices proportionately; the new money goes to specific persons or industries, raising their prices and incomes first. The effect of inflation is always to redistribute wealth and income in ways that distort incentives and production, create obvious injustices, and enkindle social discontent.

Moreover, Mises presented in this book, for the first time, at least the rudiments of a satisfactory explanation of the business cycle. He showed that boom and bust were by no means inherent in capitalism, as the Marxists insisted, but that they did tend to be inherent in the monetary and credit practices prevailing up  to that time (and largely since). The fractional bank-reserve system, and the support furnished by central banks, tend to promote the over-expansion of money and credit. This raises prices and artificially lowers interest rates, thus giving rise to unsound in- vestment. Finally, for an assortment of reasons, the inverted pyramid of credit shrinks or collapses and brings on panic or depression.

Mises' Socialism is an economic classic written in our time. It is the most devastating analysis of the system ever penned. It examines that philosophy from almost every possible aspect – its doctrine of violence, as well as that of the collective ownership of the means of production; its ideal of equality; its proposed solution to the problem of production and distribution; its probable operation under both static and dynamic conditions; its national and international consequences.

This is by far the ablest and most damaging refutation of socialism since Eugen von Bohm-Bawerk published his memorable, Karl Marx and the Close of His System,* in 1898. It is more. Bohm-Bawerk confined himself mainly to an examination of Marx's technical economics. Mises scrutinized socialism in all its ugly aspects.

His outstanding contribution was to point out that socialism must fail because it is incapable by its very nature of solving "the problem of economic calculation." A socialist government does not know how to distribute its labor, capital, land and other factors of production to the best advantage. Since it does not know which commodities are being produced at a social profit and which at a social loss, it does not know how much of each commodity or service to plan for.

In short, the greatest difficulty to the realization of socialism, in Mises' view, is intellectual. It is not a mere matter of goodwill, or of willingness to cooperate energetically without personal reward. “Even angels, if they were endowed only with human reason, could not form a socialistic community." Capitalism solves this problem of economic calculation, through money prices and money costs of both consumers' and producers' goods, which are fixed by competition in the open market.

On the basis of this single achievement, the late Oscar Lange, a Marxist economist who later became a member of the Polish Politburo, once proposed that future socialists erect a statute to Ludwig von Mises. Said Lange: "It was his powerful challenge that forced the socialists to recognize the importance of an adequate system of economic accounting to guide the allocation of resources in a socialist economy." Lange was at least brought to recognize the problem and thought he had solved it. In fact, the only way that socialists can solve it is by adopting capitalism.

Because it illustrates not only the cogency of his logic, but also the depth of his feeling, the power of his intellectual leadership, and the uncanny foresight with which he judged the course of events more than 40 years ago, I cannot forbear from quoting a passage from the last page of Mises' Socialism:

Everyone carries a part of society on his shoulders; no one is relieved of his share of responsibility by others. And no one can find a safe way out for himself if society is sweeping toward destruction. Therefore everyone, in his own interests, must thrust himself vigorously into the intellectual battle. None, can stand aside with unconcern; the interests of everyone hang on the result. Whether he chooses or not, every man is drawn into the great historic struggle, the decisive battle into which our epoch has plunged

As the eminent French economist Jacques Rueff once put it: "Those who have heard him have often been astonished at being led by his cogency of reasoning to places whither they, in their all-to-human timorousness, had never dared to go."