The Rothbardian Analysis of the State 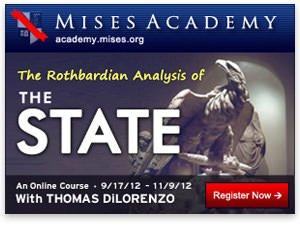 09/14/2012Thomas J. DiLorenzo
"Taxation is theft, purely and simply, even though it is theft on a grand and colossal scale which no acknowledged criminals could hope to match. It is a compulsory seizure of the property of the State's inhabitants, or subjects."
Murray Rothbard, The Ethics of Liberty

The recent explosion of interest in the writings of Murray Rothbard (and of Austrian economics in general) has focused on Rothbard's work on money, banking, and business-cycle theory. The reason for this is the increasingly widespread understanding that it was the Greenspan Fed — and other government policies — that created the housing bubble and, subsequently, the Great Recession. Only the Austrians recognized the bubble and predicted its bursting. Mainstream economists such as Paul Krugman were totally in the dark about it, and remain so.

But Murray Rothbard was much more than a student of money, banking, and business-cycle theory. He was deeply educated in history and political philosophy (among other disciplines) as well as economics, and he developed a body of literature that Hans-Hermann Hoppe calls "Austrian social theory." Austrian social theory is an indispensable tool for understanding the nature of the state and all of its activities, a subject that occupied Murray Rothbard's mind for his entire adult life. That is why I am offering an eight-week online course called The State: The Rothbardian Analysis under the auspices of the Mises Academy, beginning on Monday, September 17.

Rothbard's work challenges the notion of the Public Choice School that the state is somehow a voluntary organization (the main theme of the work of Nobel laureates James M. Buchanan and George Stigler). His work also demolishes the theory held by mainstream economists that taxation, too, is somehow voluntary. Relying on more than just narrow economic theory, Rothbard's work explains such phenomena as the role of the state's "ideological minions" (i.e., the Paul Krugmans and Doris Kearns-Goodwins of the world), the role of ideology, the role of intellectuals, the nature of state coercion, and much more.

We will study libertarian class theory as it has developed over the past several hundred years, which was an important element of Rothbard's analysis of the state. Rothbard also had a much richer understanding of the role of government bureaucracy than the Public Choice School (or any other school of thought), and that will be another subject of study.

Murray Rothbard was a top-flight economist and one of the few Austrians to contribute a substantial body of literature to the subdiscipline of public finance. Consequently, several classes will be devoted to the Rothbardian analysis of government taxing and spending, and all of its consequences. The political economy of interventionism, socialism, central banking, and war are other topics that will be studied, utilizing the writings of Rothbard and various Rothbardians (such as Robert Higgs on war, for instance). The week-by-week topical outline will be as follows.

What I hope students will get out of this class is a solid understanding of how to analyze the behavior of the state, based on sound principles of Austrian economics, supplemented by some aspects of Murray Rothbard's lifelong study of history and political philosophy.