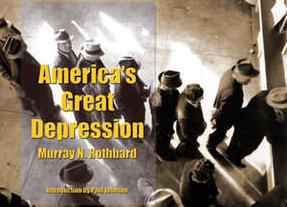 "The Depression was the first time in the history of the U.S. that wages did not fall during a period of significant deflation." –UCLA economist Lee E. Ohanian

In America's Great Depression, originally published in 1963, Murray Rothbard argued that the recession-adjustment that began in 1929 was greatly worsened and turned into a full-blown depression by the policies implemented by Herbert Hoover. Among the Hooverite policies that stifled the adjustment process, Rothbard identified public-works programs, increases in taxes, the imposition of the Smoot-Hawley tariff, but especially Hoover's efforts to prevent the downward adjustment of nominal wages by exerting pressure on big industrialists not to cut (and even to raise) their employees' wage rates.

Rothbard's explanation of how the temporary and benign recession-adjustment process was impeded and diverted into the Great Depression ran counter to the view that Milton Friedman and Anna Schwartz put forth in their classic work A Monetary History of the United States, 1867–1960, also published in 1963. According to Friedman-Schwartz, it was the collapse of the money supply due to the negligence of the Fed that turned what should have been a "garden-variety recession" into the Great Depression. The Friedman-Schwartz view came to dominate mainstream macroeconomics after the collapse of the Keynesian consensus in the 1970s. Indeed, it is today the conventional explanation of the Great Depression, which Bernanke holds to and which governs the policy response of the Fed to the current financial crisis.

Thus, for decades Rothbard and a handful of Misesian economists were virtually alone in maintaining that Hoover's interventionist policies, particularly as they impacted the industrial labor market, were mainly responsible for transforming what should have been a short and sharp recession into the economic catastrophe of epic proportions that we now know as the "Great Depression." Now comes a National Bureau of Economic Research (NBER) working paper written by a prominent macroeconomist with impeccable academic credentials — and accepted for publication by the influential Journal of Economic Theory — which challenges the Friedman-Schwartz view and lends ample evidence to the Rothbardian position on the genesis of the Great Depression. In writing his article, "Who — or What — Started the Great Depression," UCLA economist Lee E. Ohanian spent four years poring over wage data and culling information from sources related to Hoover and his administration.1

In order to quantify the magnitude of the effects of Hoover's industrial labor market program, Ohanian used these data and sources to construct and calculate a general-equilibrium model of the Hoover economy and compared it to how the model economy would have behaved without the Hoover program.

Ohanian contends that Hoover's policy of propping up wages and encouraging work sharing "was the single most important event in precipitating the Great Depression" and resulted in "a significant labor market distortion."

Thus, "the recession was three times worse — at a minimum — than it otherwise would have been, because of Hoover."

The main reason is that in September 1931 nominal wage rates were 92 percent of their level two years earlier. Since a significant price deflation had occurred during these two years, real wages rose by 10 percent during the same period, while gross domestic product (GDP) fell by 27 percent. By contrast, during 1920–1921 — a period that was accompanied by a severe deflation — "some manufacturing wages fell by 30 percent. GDP, meanwhile, only dropped by 4 percent."

As Ohanian notes, "The Depression was the first time in the history of the US that wages did not fall during a period of significant deflation." Ohanian estimates that the severe labor-market disequilibrium induced by Hoover's policies accounted for 18 percent of the 27 percent decline in the nation's GDP by the fourth quarter of 1931.

Regarding the now-conventional explanations of the Great Depression, such as widespread bank failures and the severe contraction of the money supply, Ohanian points out that these two events did not occur to a significant extent until mid-1931, which was two years after the implementation of Hoover's industrial labor market policies.

The conclusion of Ohanian's paper is quite — one is tempted to say "hardcore" — Rothbardian.

The Great Depression that quickly superseded and distorted the benign recession-adjustment process was not in any sense caused by monetary deflation but by government-induced nominal wage rigidities, which of course can be temporarily circumvented by surreptitiously reducing real wages via unanticipated monetary expansion. Thus writes Ohanian:

I conclude that the Depression is the consequence of government programs and policies, including those of Hoover, that increased labor's ability to raise wages above their competitive levels. The Depression would have been much less severe in the absence of Hoover's program. Similarly, given Hoover's program, the Depression would have been much less severe if monetary policy had responded to keep the price level from falling, which raised real wages. This analysis also provides a theory for why low nominal spending — what some economists refer to as deficient aggregate demand — generated such a large depression in the 1930s, but not in the early 1920s, which was a period of comparable deflation and monetary contraction, but when firms cut nominal wages considerably.

This leaves us with a very interesting question.

Here we have a paper, written by a eminent macroeconomist at a top-tier research university, which is an NBER working paper and is soon to be published in the highly ranked Journal of Economic Theory.

Is this sufficient to provide surcease from those Austrian economists who dismiss Rothbard and Mises's analysis of the Great Depression and make the bizarre claim that the inflationary phase and the initial downturn in 1929 is explained by the Austrian theory of the business cycle but that this theory needs to be supplemented by the Friedman-Schwartz story to account for the severity of the contractionary phase of 1930–1933?