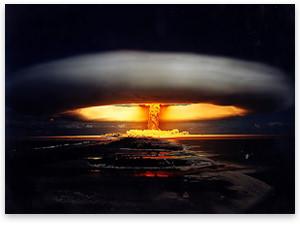 Rothbard modified the famous dictum of Marx: he wished both to understand and change the world. He endeavored to apply the ideas he had developed in his theoretical work to current politics and to bring libertarian views to the attention of the general public. One issue for him stood foremost. Like Randolph Bourne, he maintained that "war is the health of the state"; he accordingly opposed an aggressive foreign policy.

His support for nonintervention in foreign policy led him to champion the Old Right. John T. Flynn, Garet Garrett, and other pre-World War II "isolationists" shared Rothbard's belief in the close connection between state power and bellicose foreign policy.

The situation was quite otherwise with postwar American conservatism. Although Rothbard was an early contributor to William Buckley's National Review, he rejected the aggressive pursuit of the Cold War advocated by Buckley and such members of his editorial staff as James Burnham and Frank S. Meyer. He broke with these self-styled conservatives and thereafter became one of their strongest opponents. For similar reasons, he condemned their neoconservative successors.

Rothbard made clear the basis of his opposition to National Review foreign policy in an essay, "For a New Isolationism," written in April 1959; the magazine did not publish it. To those who favored a policy of "liberation" directed against the Communist bloc, Rothbard raised a devastating objection:

In all the reams of material written by the Right in the last decade [1949–1959], there is never any precise spelling-out of what a policy of ultrafirmness or toughness really entails. Let us then fill in this gap by considering what I am sure is the toughest possible policy: an immediate ultimatum to Khrushchev and Co. to resign and disband the whole Communist regime; otherwise we drop the H-bomb on the Kremlin…. What is wrong with this policy? Simply that it would quickly precipitate an H-bomb, bacteriological, chemical, global war which would destroy the United States as well as Russia.1

To this dire picture, proponents of "rollback" would of course respond that the Communists would surrender: Rothbard dissents, for reasons that will be discussed in detail later. Suffice it to say here that he thought it obvious that since "the destruction of the United States would follow such an ultimatum, we must strongly oppose such a policy."2

If "liberation" leads to national suicide, what is the alternative? Rothbard suggests a return to "the ancient and traditional American policy of isolationism and neutrality." But is this not open to a fatal objection? "But, I [Rothbard] will hear from every side, everyone knows that isolationism is obsolete and dead, in this age of H-bombs, guided missiles, etc."3 How can America shun involvement in European power politics if Russia has the ability to destroy us? No longer can we retreat to Fortress America.

To this Rothbard has a simple response: "a program of world disarmament up to the point where isolationism again becomes militarily practical."4 If this policy were carried out, America would be safe from foreign attack: no longer would we need to involve ourselves in foreign quarrels. Mutual disarmament was in Russia's interest as well, so a disarmament agreement was entirely feasible.

Ever alert for objections, Rothbard anticipates that critics will charge that a Fortress America would have crushing military expenses and be cut off from world trade. Not at all, he responds:

this argument, never very sensible, is absurd today when we are groaning under the fantastic budgets imposed by our nuclear arms race. Certainly … our arms budget will be less than it is now…. The basis of all trade is benefit to both parties.5

Even if a hostile power controlled the rest of the world, why would it not be willing to trade with us? Unfortunately, Rothbard's arguments did not have any effect on his bellicose antagonists.

[This article is excerpted from The Essential Rothbard (2007).]