The Roosevelt Nobody Knows 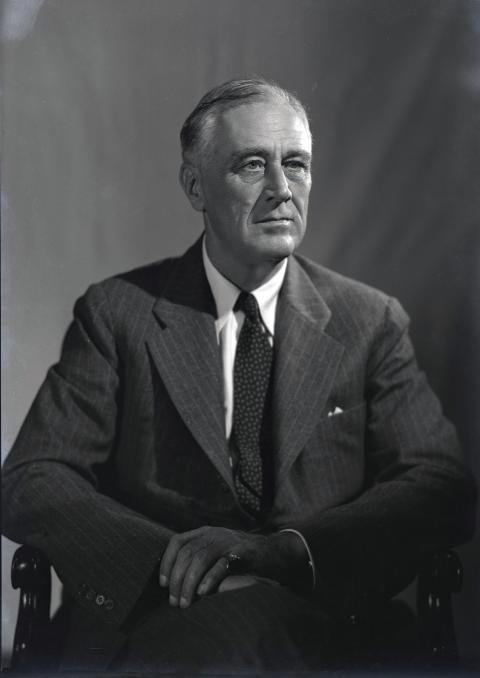 The economy is in bad shape after years of poorly conceived policy interventions, and as a result, the general public holds the federal government in disrepute.  Suddenly, an attack by foreign enemies on the U.S. galvanizes the nation in support of the political class, thus rejuvenating formerly demoralized public employees and altering the image of the president from a likable man, not known for his mental agility, to a wise statesman in calm control of the nation, a man so obviously dedicated to his responsibilities that he could unilaterally declare "an unlimited national emergency" and be trusted with the power.

The president is question is not George W. Bush but Franklin Delano Roosevelt, who knew the effect that Days of Infamy can have on the public's tolerance for statism at home.  Historian Thomas Fleming's masterpiece, The New Dealers' War: Franklin D. Roosevelt and the War Within World War II, explains how this-and more-happened sixty years ago, in an outstanding book that sadly became timelier following September 11, 2001.

Fleming's picture of FDR is a decidedly less-than-iconic portrait of our thirty-second president, when compared to the image that has been drummed into the national psyche in countless government-funded civics classes since his death in April 1945.  Fleming's FDR is driven by a messianic complex and an intense hatred of German history, culture, and people.

To appreciate FDR's strong desire for war with Germany, which was so great that he sanctioned one with Japan in order to achieve it, it is important to understand the state of the economy in the years leading up to it.  By the midpoint of FDR's second term, the failure of the New Deal policies was evident to all but the truly delusional. The unemployment rate again reached levels associated with the hated Hoover, while the public's tolerance of the pretentious New Dealers and their endless attempts to control the economy waned.

Especially humiliating were statistics that showed the United States lagging far behind foreign countries in recovering from the Depression.  American national income in 1937 was 85.8 percent of the 1929 high-water mark, while England's was 124.3 percent. Chile, Sweden, and Australia had growth rates in the 20-percent range. The United States figure was a dismal -7.0 percent.

The New Deal was exposed as a bad one, and the president's image looked irrevocably tarnished.  A disconsolate FDR would confide to his associates his frustrations resulting from his lost political dominance:  "[It is] a terrible thing to look over your shoulder when you are trying to lead-and finding no one there" (p. 67).

But Roosevelt's political capital was vastly superior to his mental capital (he would joke at times about earning "gentleman's C's" while at Harvard).  He knew that the only way he could repair his place in history to fit his own self-image was to lead the country in an unpopular European war, thus necessitating an attempt for an unprecedented third term.  Fleming argues, convincingly, that America's entry into the war was crucial for the revival of the New Deal.

If this scheme sounds crass six decades later, Fleming goes to great lengths to prove that Roosevelt's contemporary adversaries recognized it as the raison d'etre of Roosevelt's foreign policies following the recession of 1937-38.  Journalist John Pritchard would note in the June 1941 issue of Coronet magazine (quoted by Fleming, p. 81):

The first stage [of the New Deal] had been a visionary attempt to reshape the American economy into a planned state.  The second stage was an entirely new approach, "The New Deal of War."  Unable to solve the problems of the American economy peacefully, Roosevelt was taking the nation to war in order to achieve full production-and state control of everything.

A group of Republican congressman would tell ex-President Hoover that "the administration was concerned with war not as war but as a method of destroying the present form of government in the United States" (p. 84), while Senator Robert A. Taft of Ohio warned that "Entrance into the European War will be the next great New Deal experiment" (p. 87).

Several essays meant to rally disenchanted New Dealers fueled these ideas, such as the one written by the archetypal New Dealer Harry Hopkins with the brash title, "The New Deal of Mr. Roosevelt is the Designate and Invincible Adversary of the New Order of Hitler."  There is only one way to defeat Hitler, Hopkins would write (p. 85): "By the new order of democracy, which is the New Deal universally extended and applied."  Hopkins would (ominously) add that democracy "must wage total war against totalitarian war.  It must exceed the Nazi in fury, ruthlessness and efficiency."  Apparently, you have to be a totalitarian to beat a totalitarian.  (Does the same logic apply for beating terrorism?)

But how to get into the war was another matter entirely, given widespread American opposition to such an action, which FDR was forced to acknowledge in order to win the election of 1940.  This explains why Roosevelt confided to Harold Ickes, "I am not willing to fire the first shot.  I am waiting to get pushed into the situation."  FDR's attempts to get pushed make for fascinating reading.  Fleming's description of the "strange mission of the Lanikai" (in which a Navy schooner was sent to tweak Japanese naval forces at Cam Ranh Bay off the coast of Indonesia) and the leaking of the Rainbow Five war plan (in which plans for total war with Germany were revealed to the press, most likely by Roosevelt himself) is captivating.

Once the U.S. finally enters the war, Roosevelt is depicted as having the time of his life.  Why wouldn't he?  Presidents assume near dictatorial powers during wars, and Roosevelt was able to manipulate this one to provide moral legitimacy to his domestic agenda.  Later, economist Murray Rothbard would explain this symbiotic relationship between domestic and foreign policies to convey the interdependent relationship between the welfare and warfare states.  With the war, Roosevelt could boast of eliminating unemployment at home while fighting evil abroad.  Not a bad deal.

Of course, it was quite a bad deal if you lived in Dresden or Tokyo, or languished in a concentration camp in Poland when the war otherwise could have ended sooner.  Fleming describes in heart-rending detail how Roosevelt squelched internal efforts by members of the German resistance to defeat Hitler, including those by Adm. Wilhelm Canaris and Gen. Erwin Rommel, fearing that a successful resistance movement in 1943 would hamper his election plans for 1944.

Indeed, polls predicted that if the war had ended before the election, even with FDR on the Democratic ticket, the GOP candidate would have won in a landslide.  Fleming argues that this fueled a foolish unconditional surrender policy toward Germany, painting the German people into a corner and increasing their degree of desperation on the battlefield.  The result was the entirely avoidable and costly extension of the war in Europe.  Fleming notes:  "If we add all the dead and wounded since 1943, when unconditional surrender was promulgated, destroying the German's resistance's hope of overthrowing Hitler," eight million more people died.  "Unquestionably, this ultimatum was written in blood" (p. 467).

There is much, much more in this superb book, including Fleming's description of Henry Wallace-perhaps the weirdest man ever to achieve high office anywhere-and of Roosevelt's revealing devotion to the evil Stalin, resulting in the needless bestowing of Christian Eastern Europe to the Soviet Empire following the war.

At one point early in the book, Fleming writes of Harry Truman's opposition to a third term for Roosevelt because his study of history had convinced him no man should be considered indispensable in a republic.  This sentiment complements that of Lord Acton, whose famous aphorism ("all power tends to corrupt; absolute power corrupts absolutely") warns against placing too much power in the hands of any individual.  The bloody consequences of such concentrations of power were evident throughout the twentieth century.

Of course, the timeliness of The New Dealers' War increased following the events of September 11-the present generation's Day of Infamy.  Since that date, a rejuvenated Congress has authorized many tens of billions to fight yet another enemy and to fund new layers of government control at home, with the near unanimous support of a shaken public.  Meanwhile, the current president has identified the federal government's new role of ridding the world of evil. It would appear that support for the government is once again high, in marked contrast to the divided nation that was revealed during the 2000 election.  It must be fun again to be in public service.

Thomas Fleming reminds us that we have gone down this road before. What we gained was an overweening state and what we lost were many of the liberties that should be the most treasured of all values. The wise among us will heed the lesson.