GET NEWS AND ARTICLES IN YOUR INBOXPrint
A
A
Home | Mises Library | Ronald Hamowy, RIP 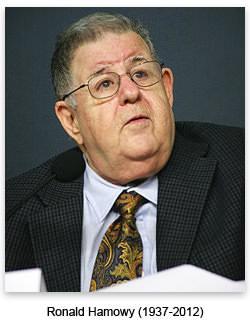 Murray Rothbard regarded Ronald Hamowy as the funniest person he had ever known, and when I met him in 1979, it was easy to see why. Once in a bookstore near UC Berkeley, he paid for a book by credit card, which wasn't then as common as it is today.

The sales clerk said, "This is all right, but personally I just use credit cards in emergencies."

"This is an emergency," Ronald answered. "I have to rush this book to a hospital immediately."

I was in that same year in line with him at a travel agency in San Francisco, to buy tickets to the Libertarian Scholars Conference in New York. When I got to the head of the line, the agent wouldn't accept my check, because I didn't have the proper identification. Ronald said that I could make out the check to him, and he would pay for the ticket on his credit card. When I gave him the check, he asked in a loud voice, "Do you have any ID?"

Another time, I was talking to a cashier in a bank. Ronald said, again loudly, "What name are you using this time, John?"

It would be easy to go on for pages with additional stories, but I'll stop with one more. A man came up to him near Stanford University, obviously intending to ask for a ride. "Which way are you going?' he asked. Ronald answered, "The otherway. We're going the other way."

He often put his wit at the service of his formidable critical intelligence. He wrote a devastating review of Garry Wills's Inventing America for The William and Mary Quarterly (October 1979). Wills argued that Jefferson had been influenced when he wrote the Declaration of Independence, not primarily by John Locke, but rather by the Scottish moral sentimentalists Hutcheson and Hume. One correspondent, objecting to Hamowy's argument that Wills was wrong about this, pointed out that Hume influenced Madison. He inquired, "If Madison, why not Jefferson?" When he was going over his answer with me, Ronald remarked, "If Hume, why not Kant?" but he did not include this line in his published response to his critic.

Besides his analytic abilities, Ronald had another great scholarly virtue: he was incredibly thorough in his research. For his edition of Hayek's The Constitution of Liberty, published in 2011, he checked every one of Hayek's hundreds of footnotes for accuracy. One footnote of his own is my favorite in the book and shows his polemical style at its fiercest. About the British political theorist John Gray, he says, "Alas, since writing his essay on Hayek, Gray appears to have abandoned his earlier libertarian leanings and has embraced a somewhat dim-witted mix of fashionable and often contradictory views on the need for brotherhood directed by an authoritarian state" (CL, p. 22, n. 55).

He displayed the same painstaking thoroughness in his great edition of Cato's Letters, and it is for this work that he is best known among historians of the 18th century. He also edited the Encyclopedia of Libertarianism, and this also required immense work on his part.

Ronald was a strong Rothbardian in his political views, and — along with his friends Ralph Raico, Leonard Liggio, George Reisman, and a few others — was a member of the Circle Bastiat, a group of Rothbard's closest associates who met regularly in his Manhattan apartment from 1953 to 1959. Along with Raico, he edited the great libertarian journal The New Individualist Review, while both were graduate students at the University of Chicago.

Ronald's commitment to Rothbard's position led him to some of his most valuable work in political theory. He studied with Friedrich Hayek in the Committee on Social Thought at Chicago; but though he admired Hayek greatly as a scholar, he rejected many of his views on political theory. He challenged Hayek's stress of general laws, holding that generality as Hayek conceived it is entirely consistent with injustice. The essay impressed Hayek, who responded to it; but this exchange did not end Ronald's dissent from his teacher's views. In a later paper, he rejected Hayek's account of the growth of the common law.

His book The Political Sociology of Freedom includes his essays on Hayek, but I can't resist quoting something else from it. About one book he did not altogether admire, he says,

It is difficult to know what to make of Petsoulas's book. It was written as a dissertation at Nuffield College, Oxford, and has appeared under the imprimatur of a reputable academic press, yet it falls so far short of what would ordinarily be expected of a serious exploration of the topic that the reader is at a loss to know why it ever saw print.

His work on Hayek is well known, but he was also a strong critic of Robert Nozick. He and Nozick had met when they were both students at Oxford, and Nozick when we talked about Ronald always spoke about him warmly. But Ronald had come up with an original and profound new objection to Nozick's derivation of a minimal state. He undermined Nozick's claim that a dominant agency could prohibit the application of risky decision procedures by independents to its clients. He and I hoped to write an article about this and other objections to Nozick's arguments; but, alas, this did not come to pass.

I saw Ronald last at the Mises University in Auburn, Alabama, in July 2011. He had been having severe health problems for several years, but he was in great form and impressed the graduate students with his scholarly talk on the Canadian medical system. As always, he kept me laughing. Unfortunately, as I learned from his companion Clement Ho, he became ill several months later and never really recovered. When I saw him at the Mises Institute, I thought back to those happy days in 1979 when I worked with him at Inquiry magazine. He was a very kind person and wonderful friend.