On the Road to the Servile State 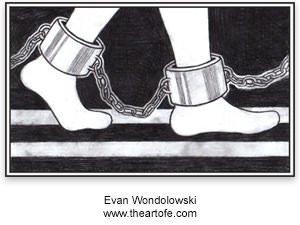 In recent months, there has been a good deal of discussion of change in the United States. Sadly, over the last two centuries, the direction in which this country has been changing seems to be away from liberty and towards more control. The present changes are hardly unprecedented and certainly not unforeseen. In this essay I will examine two authors, Hilaire Belloc and F.A. Hayek, who present a useful analysis of our present situation.

In 1912, Hilaire Belloc published The Servile State, in which the Englishman prophesied that the world was moving to a reestablishment of slavery. This book made quite an impression on a number of thinkers, including F.A. Hayek. Hayek makes favorable mention of Belloc's work in The Road to Serfdom, which depicts the modern world as reversing its advance from slavery to liberty.[1]

Belloc defines the Servile State as "that arrangement of society in which so considerable a number of the families and individuals are constrained by positive law to labor for the advantage of other families and individuals as to stamp the whole community with the mark of such labor."[2] Belloc notes that "the servile condition remains … an institution of the State"[3] and that

the free man can refuse his labour and use that refusal as an instrument wherewith to bargain; while the slave has no such instrument or power to bargain at all, but is dependent for his well being upon the custom of society, backed by the regulation of such of its laws as may protect and guarantee the slave.[4]

The Servile State is not the market economy. It is also not simply socialism. Instead, it is a creation of the State to benefit a class, which is considered free, and for which class the system is perpetuated by force of law. Essentially, it is a State marked by artificial, government-created monopolies. Hayek provides the rise of Nazism as an example of what Belloc warns against. The direction that the United States is heading may well provide another case.

The first area that comes to mind is the healthcare debate. Certain drafts of the bill contain a provision mandating healthcare coverage of a level acceptable to the government. If a person does not purchase such coverage, he is threatened with a fine and possibly jail time for refusal to comply.[5] Here we have positive law compelling a person to work (to pay for his coverage) for the benefit of others; in this case, the benefit is being sold as a way to eliminate free riders and ensure fairness.

"The unique feature of the present assault on liberty is that it seems, at first, to be the reverse. The 'wealthy' are being made the slaves of the 'poor'."

Secondly, data from the 2007 tax year shows that the top 50 percent of American tax payers now pay over 97 percent of all income tax.[6] Meanwhile, the Tax Policy Center states that 47 percent of American households will pay no federal income tax.[7] When it comes to total federal taxes paid, the top 20 percent of taxpayers are paying over 69 percent of taxes, which is part of an increasing trend.[8] Obama's pledge not to raise taxes on people who make under $250,000 implies that this pattern is likely to continue.[9]

Generally, less taxes being paid is something to celebrate. However, in this case, we have one group, "net tax payers," which provides the support, to an increasing degree, for another group, "net tax receivers." This is a form of income redistribution carrying the weight of federal law. As the number of "net tax receivers" rises past 50 percent, the Servile State's requirements are met.

In The Road to Serfdom, Hayek notes that the tendency towards socialism and slavery is a reversal of the whole evolution of Western civilization away from slavery and centralization since the fall of Rome.[10] Hayek believes that this problem can be corrected and that it is not an unavoidable conclusion of our Western culture.

In order to support his claim that corporate-government collusion is not required for economic success, he cites a government report stating that "the superior efficiency of large establishments has not been demonstrated."[11] The report finds that "monopoly is frequently the product of factors other than lower costs of greater size."[12] These factors include "collusive agreements" and "public policies."[13] This last statement agrees with Belloc's description of the Servile State being caused by government serving the interests of business.[14] The main difference between Hayek and Belloc is that, unlike Hayek, Belloc believed that a move towards the Servile State was a natural result of the instability of capitalism.[15]

Corporatist policies are generally thought of as monopolies and governments conspiring together to keep the working man in bondage to them with no hope of escape. This is the picture presented by Belloc. The unique feature of the present assault on liberty is that it seems, at first, to be the reverse. The "wealthy" are being made the slaves of the "poor." 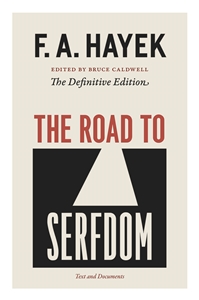 "We march towards slavery, accompanied by songs of fairness and change."

The problem with this analysis is that instead of helping the poor against the rich, what is really happening is that government is being expanded. Net tax receivers become de facto employees of the State, and thus have no natural incentive to upset the status quo. To do so would literally be to bite the hand that feeds them. In fact, these new net tax receivers, because they are dependent upon the government for at least part of their subsistence, are a slave class as well under Belloc's definition.[16]

[15] Ibid., p. 5. It is my belief that Belloc's mistake on this point comes from his consideration of capitalism in a democratic framework, which does have inherent tendencies towards statism and socialism. A further examination of this point is beyond the scope of this article.

Brian Douglass is a senior pursuing a degree in economics at Tennessee Technological University in Cookeville, TN.