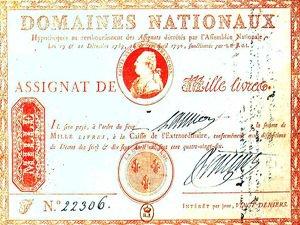 Today, anyone who talks about hyperinflation is treated like the shepherd boy who cried wolf. When the wolf actually does show up, though, belated warnings will do little to keep the flock safe.

The current Federal Reserve strategy is apparently to wait for significant price inflation to show up in the consumer price index before tapering. Yet history tells us that you treat inflation like a sunburn. You don’t wait for your skin to turn red to take action. You protect yourself before leaving home. Once inflation really picks up steam, it becomes almost impossible to control as the politics and economics of the situation combine to make the urge to print irresistible.

The hyperinflation of 1790s France illustrates one way in which inflationary monetary policy becomes unmanageable in an environment of economic stagnation and debt, and in the face of special interests who benefit from, and demand, easy money.

In 1789, France found itself in a situation of heavy debt and serious deficits. At the time, France had the strongest and shrewdest financial minds of the time. They were keenly aware of the risks of printing fiat currency since they had experienced just decades earlier the disastrous Mississippi Bubble under the guidance of John Law.

France had learned how easy it is to issue paper money and nearly impossible to keep it in check. Thus, the debate over the first issuance of the paper money, known as assignats, in April 1790 was heated, and only passed because the new currency (paying 3 percent interest to the holder) was collateralized by the land stolen from the church and fugitive aristocracy. This land constituted almost a third of France and was located in the best places.

Once the assignats were issued, business activity picked up, but within five months the French government was again in financial trouble. The first issuance was considered a rousing success, just like the first issuance of paper money under John Law. However, the debate over the second issuance during the month of September 1790 was even more chaotic since many remembered the slippery slope to hyperinflation. Additional constraints were added to satisfy the naysayers. For example, once land was purchased by French citizens, the payment in currency was to be destroyed to take the new paper currency out of circulation.

The second issuance caused an even greater depreciation of the currency but new complaints arose that not enough money was circulating to conduct transactions. Also, the overflowing government coffers resulting from all this new paper money led to demands for a slew of new government programs, wise or foolish, for the “good of the people.” The promise to take paper money out of circulation was quickly abandoned, and different districts in France independently started to issue their own assignats.

Many Frenchman soon became eternal optimists claiming that inflation was prosperity, like the drunk forgetting the inevitable hangover. Although every new issuance initially boosted economic activity, the improved business conditions became shorter and shorter after each new issuance. Commercial activity soon became spasmodic: one manufacturer after another closed shop. Money was losing its store-of-value function, making business decisions extremely difficult in an environment of uncertainty. Foreigners were blamed and heavy taxes were levied against foreign goods. The great manufacturing centers of Normandy closed down and the rest of France speedily followed, throwing vast numbers of workers into bread lines. The collapse of manufacturing and commerce was quick, and occurred only a few months after the second issuance of assignats and followed the same path as Austria, Russia, America, and all other countries that had previously tried to gain prosperity on a mountain of paper.

To purchase government land, only a small down payment was necessary with the rest to be paid in fixed installments. These debtors quickly saw the benefit of a depreciating currency. Inflation erodes the real value of any fixed payment. Why work for a living and take the risk of building a business when speculating on stocks or land can bring wealth instantaneously and with almost no effort? This growing segment of nouveau riche quickly used its newfound wealth to gain political power to ensure that the printing presses never stopped. They soon took control and corruption became rampant.

Of course, blame for the ensuing inflation was assigned to everything but the real cause. Shopkeepers and merchants were blamed for higher prices. In 1793, 200 stores in Paris were looted and one French politician proclaimed “shopkeepers were only giving back to the people what they had hitherto robbed them of.” Price controls (the “law of the maximum”) were ultimately imposed, and shortages soon abounded everywhere. Ration tickets were issued on necessities such as bread, sugar, soap, wood, or coal. Shopkeepers risked their heads if they hinted at a price higher than the official price. The daily ledger of those executed with the guillotine included many small business owners who violated the law of the maximum. To detect goods concealed by farmers and shopkeepers, a spy system was established with the informant receiving 1/3 of the goods recovered. A farmer could see his crop seized if he did not bring it to market, and was lucky to escape with his life.

Everything was enormously inflated in price except the wages for labor. As manufacturers closed, wages collapsed. Those who did not have the means, foresight, or skill to transfer their worthless paper into real assets were driven into poverty. By 1797, most of the currency was in the hands of the working class and the poor. The entire episode was a massive transfer of real wealth from the poor to the rich, similar to what we are experiencing in Western societies today.

The French government tried to issue a new currency called the mandat, but by May 1797 both currencies were virtually worthless. Once the dike was broken, the money poured through and the currency was swollen beyond control. As Voltaire once said, “Paper money eventually returns to its intrinsic value — zero.” In France, it took nearly 40 years to bring capital, industry, commerce, and credit back up to the level attained in 1789.