GET NEWS AND ARTICLES IN YOUR INBOXPrint
A
A
Home | Mises Library | Rethinking the Constitution, Completely 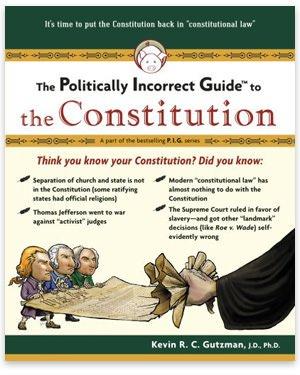 Kevin Gutzman gives his readers much more than they had a right to expect. The "Politically Incorrect Guide" series in which his book appears aims at a popular audience: its goal is to correct commonly held myths of leftist propaganda. 1

Gutzman eminently fulfills this goal, but his book cannot be called an elementary work. Quite the contrary, The Politically Incorrect Guide to the Constitution is a major contribution to American constitutional history.

Gutzman is a leading authority on the Virginia ratification debates on the Constitution, and he uses his research to great effect. He has been much influenced by the pioneering originalist scholar Raoul Berger, but he strengthens and extends Berger's views.

The principal thesis of the book is that the Jeffersonian, states' rights understanding of America's founding and the Constitution is correct. When the American colonies assembled in the Continental Congress and adopted the Declaration of Independence in 1776, they did not create a new nation, Abraham Lincoln to the contrary notwithstanding.

The very word "Congress" shows this. "The Congress was, as Massachusetts John Adams put it, a meeting place of ambassadors. In fact, the word congress had always denoted assemblies of the representatives of sovereigns — as in the case of the Congress of Westphalia in the seventeenth century" (p. 10). The Declaration said that the colonies were now states, i.e., independent governments. "In the Declaration's culminating fourth section, Congress declared the colonies to be 'free and independent states' and claimed for them the right to do everything that free countries could do" (p. 11).

Nor did the Articles of Confederation change matters. Each state retained full sovereignty over all matters not "expressly delegated" to the United Sates. True enough, the Articles spoke of "Perpetual Union"; but as Gutzman astutely notes, the "fact that their union had no set end date, in part because the length of the war could not be foreseen, was denoted by calling it 'perpetual.' (In those days treaties between European states often purported to be 'perpetual.' This did not mean that neither side could bring a treaty agreement to an end, but that there was no built in sunset provision)" (p. 12). Further, in the Treaty of Paris that ended the war, George III mentioned each of the colonies by name, acknowledging them to be "sovereign and independent States" (p. 10).

Gutzman has made a strong case that, prior to the adoption of the Constitution, the states were not subordinated to a national government. One might allege on the other side that the states were not represented abroad by separate ambassadors, but this is far outweighed by the considerations our author adduces. He now confronts the principal challenge to his thesis: did the Constitution change matters? Was the United States no longer an alliance of states but instead a unified nation?

As Gutzman makes clear, some delegates to the Philadelphia Convention certainly wished to change the nature of the American system. Instead of the usual split between nationalists and their opponents, however, Gutzman maintains that there were three parties in the convention: "The first was the monarchist party, the chief exemplar of which was New York's Alexander Hamilton. The monarchists were intent on wiping the states from the map and substituting one unitary government for the entire continent … The second party consisted of nationalists, people who — without ever avowing admiration for the monarchical form — wanted to push centralization as far as could reasonably be hoped … Finally, there was a cohort in the Convention of members insistent on proposing a reinforcement of the central government while maintaining the primary place of the states in the American polity — a truly federal, rather than national government" (pp. 22–24).

Gutzman rightly points out that neither of the two nationalist parties got its way. Madison, the "Father of the Constitution", wanted the federal Congress to have the power to veto state legislation, but this proposal was rejected. So far, our author has given a standard account, but now comes his key interpretive move.

He maintains that crucial to understanding the meaning of the Constitution were the intentions of the delegates to the ratifying conventions. These delegates, after all, were the people whose votes established the Constitution as legally binding. Gutzman concentrates on the Virginia convention, and he places great stress on one point.

The Virginia delegates looked on the new Constitution with great skepticism, fearing that it would become a tool for the federal government to crush the states. To placate opponents such as Patrick Henry, the leaders of the pro-ratification forces, who included Governor Edmund Randolph, the proposer of the nationalist Virginia Plan at Philadelphia, had to make a concession. They had to agree that the powers of the new Congress were limited to those "expressly delegated" in the Constitution. The delegates repudiated in advance any move by the new authorities to expand their powers beyond this. Further, they wrote into their ratification statement the right to withdraw from the new government, if it exceeded its proper powers.

Gutzman contends that because this understanding was part of Virginia's instrument of ratification, no stronger central government can claim Virginia's authorization. And since it would be senseless to think that the Constitution gives the federal government more power over some states than others, the Virginia restrictions apply to all the states.

This is the Jeffersonian view of the Constitution. Gutzman's great contribution is to show that the Virginia and Kentucky Resolutions of 1798 and 1799, the key statements of the Jeffersonian position, restated the understanding of the Virginia ratifying convention. Contrary to the Federalist opponents of the Resolutions, Jefferson and Madison did not act as innovators in 1798; and their position cannot be dismissed as merely one of several competing interpretations. It was firmly based on the legally valid Virginia ratification instrument.

Gutzman summarizes his main contention in this way:

"Most history and legal textbooks say that Jefferson and Madison invented the idea of state sovereignty. But … they only argued for what the founders had already understood to be true about the sovereign states from the beginning, even if some of the founders(the nationalist and monarchist wings) wanted to change that understanding." (p. 73)

However sound the Jeffersonian understanding of the Constitution, it of course has not prevailed in subsequent American history. Gutzman assigns federal judges a large share of the responsibility for the transformation of the original understanding; and one judge in particular arouses his critical scorn. The judge in question is the foremost of all federalist judges, Chief Justice John Marshall. To my surprise, Gutzman does not center his attack on Marbury v. Madison. He is critical of Marshall's reasoning, but "[d]espite what most legal scholars will tell you, 'judicial review' was uncontroversial before Marbury v. Madison" (p. 78). I wish that Gutzman had addressed the arguments to the contrary advanced by L. Brent Bozell in his neglected The Warren Revolution. I do not say Bozell is right, but his case against judicial review merits a response.

For Gutzman, Marshall's chief sin is not judicial review but his repudiation of the Jeffersonian understanding of the limits of federal power. In McCulloch v Maryland, Marshall "wrote that while the Articles of Confederation had specified that Congress had only the powers it was 'expressly delegated,' the Constitution included no such language, so no such principle applied to it. This was an extraordinary argument, given that Marshall himself and other Federalists … had assured their ratification colleagues that this very principle of limited federal power … was implicit in the unamended Constitution even before the Tenth Amendment was adopted" (p. 91).

Given his Jeffersonian views, it comes as no surprise that Gutzman thinks the Southern states acted fully within their rights when they seceded from the Union in 1861. "The Federalists always insisted during the ratification debates — knowing that they had to win support for the Constitution — that the states were individual parties to a federal compact. Spelling out the logic of the compact, three states — Virginia, Maryland, and Rhode Island — explicitly reserved (in the act of ratifying the Constitution) their right to secede from the Union" (p. 122).

As always, Gutzman makes a strong argument, but on one minor point I think he is mistaken. He says that one "legacy of Dred Scott v. Sandford was that after 1857, virtually any Republican candidate was sure to beat Buchanan for president in 1860 — which would almost certainly mean the dissolution of the Union (p. 120; see also p.160). But Buchanan was not a candidate for president in 1860. Suppose the Democratic Party had not split. Is it a foregone conclusion that Lincoln would have defeated Stephen A. Douglas?

One final example of Gutzman's constitutional iconoclasm must here suffice. The Supreme Court has used the due process clause of the Fourteenth Amendment as its principal instrument to eviscerate state sovereignty. Various decisions of the Court have held, e.g., that the Amendment applies the restrictions of the Bill of Rights to the states.

Gutzman rejects this view in the most radical way possible. He holds that the Fourteenth Amendment was never legally adopted. Congress required the Southern states to ratify the Amendment as a condition for readmission to the Union. But this is blatantly illegal: if the legislatures who "ratified" under duress were not already valid representatives of existing state governments, their votes had no legal effect. Our author concludes: "Thus, the Fourteenth Amendment was never constitutionally proposed to the states by Congress and never constitutionally ratified by the states, and yet today it stands (after the Constitution's structural provisions) as the most significant part of the American legal system" (p. 133).

Gutzman has made a very strong case for his Jeffersonian understanding of the Constitution. A critic might challenge him on the grounds that we need not today care about how the Constitution was understood by its eighteenth century ratifiers. But Gutzman could in response say that this is what was legally enacted; those who favor other views of government should not attempt to attain their goals through misreadings and distortion of the constitutional text.