Repudiation Is an Option 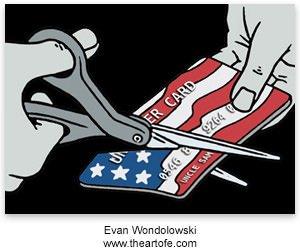 After much thought on this topic, I have decided that the best way to deal with the more than $14.3 trillion national debt is through partial repudiation. Why? It is not an easy story to tell without some context, but I will try my best to be clear.

Each year after my daughter's birthday in May, the family heads to the beach for a week of sun and sand. Of course one of the best ways to relax is by reading economics! (At least it is for me.) My choice this time was Murray Rothbard's A History of Money and Banking in the United States. I had just finished his four-volume Conceived in Liberty, which details the history of the colonial period through the Revolutionary War, so I thought that this would be a good complement. It was.

In Rothbard's History, there was a section that has stuck in my mind for the past several weeks. He detailed how, in the late 1830s and '40s, several states defaulted on their debt. (See pp. 102–3.) The upshot is that we do more damage to the economy by trying to pay off the debt.

When the government spends money, it necessarily distorts the economy. When the government buys good X, resources are drawn to the production of good X by the normal market process. The unseen aspect of this governmental action is that resources are drawn away from the production of good Y. In other words, if left alone, the market would produce more Y and less X. But the government distorts the economy; it places its thumb on one side of the scale, favoring one market player over another. Most often these political decisions make society worse off.

When government spends that money, the effects are immediate. However, this is only half of the story. The other half is centered on the source of that money. Government only has four ways by which to raise funds: taxes, borrowing, money creation, and the sale of assets.

Each of these is bad and further distorts the economy.

Government taxes are never market neutral. They always penalize one behavior and create an incentive to do something else. A sales tax penalizes spending and incentivizes savings. A gas tax penalizes driving and incentivizes telecommuting. An income tax penalizes earning an income and encourages slothfulness. And so on. Each tax imposed hinders the progress of the economy and ultimately reduces living standards. If we had to tax our way out of our national debt, we would have to tax almost 100 percent of GDP for a year. However, even this action would just barely get us out of today's hole. It does nothing for next year's budget deficit.

The second manner in which the government raises funds is through borrowing. It is impossible to borrow our way out of debt. It's like using a MasterCard to pay your Visa bill and then reversing it next month. Borrowing more is simply not an option.

The third method is money creation. The money that we use today is a fiat money, which is backed by nothing other than the "full faith and credit of the United States Government" (whatever that means). In other words, dollars are backed by nothing. When the Fed creates money, it pulls it out of a big, black hole of nothingness. Where did it come from? Nowhere. How much can it pull out? As much as it wants. There is an infinite supply available.

We could, if we wanted, pay off the national debt tomorrow. However, by doing so, $14.3 trillion dollars would be created and dumped into the economy. The dollar might suffer a slight problem of devaluation. (Yes, that was sarcasm. Prices would consequently skyrocket!) Furthermore, each newly created dollar has nonneutral effects that jam price signals, redistribute wealth to those with the new money, and sow the seeds of another business cycle. Since this approach is a de facto tax that is hidden from most people, this tends to be the method governments have historically chosen to get themselves out of their debt hole.

The fourth method government uses to raise money is the sale of assets. In the 19th century, the US government sold land in the American West and used that money to partially finance its activities. Today the US government has reversed its policy of selling assets and is instead acquiring land for various reasons (environmental, military, etc.). While selling assets has the most merit of the four in several aspects, it will not even be considered as a viable option because of this policy reversal. Furthermore, it just isn't big enough. A one-time sale cannot overcome a perpetual expenditure.

So that leaves us with a large dilemma. We have a government that cannot control its spending, and we have a national debt that cannot possibly be paid back without wrecking the economy. Even if we used a combination of tax increases, money creation, and asset sales, we wouldn't have enough to fix the mess. At each moment, there is only a finite amount of taxable wealth in the United States. If government extracts the wealth through money creation, it can't extract that same wealth with an additional tax.

The least harmful alternative is partial debt repudiation — in other words, defaulting on some of the debt. Think about what that means for a moment. (Really, take a moment and think about it.) We have spent so much that we cannot pay back our creditors. As I read in Rothbard's History, we have been in this position before. Here is how Rothbard reports Americans' reaction to public debt in the 1840s:

The British noted in wonder that the average American was far more concerned about his personal debts to other individuals and banks than about the debts of his state. In fact, the people were quite willing to have the states repudiate their debts outright. Demonstrating an astute perception of the reckless course the states had taken, the typical American response to the problem, "Suppose foreign capitalists did not lend any more to the states?" was the sharp retort, "Well who cares if they don't? We are now as a community heels over head in debt and can scarcely pay the interest." (p. 102)

The same can be said today. Should we really feel bad for those who have purchased government bonds? They are the ones who have been feeding the monstrously reckless actions of the government. When they get (partially) burned, will they be willing to finance more government debt? Of course not. Suppose the Chinese decide not to lend any more to the US government. Is this really so bad? The government would have to deal with its future overspending.

Furthermore, why should the average American be punished through higher taxes or a devalued currency for the politicians' inability to restrain spending? As Mises once pointed out, it is like hitting a pedestrian with your truck (the impact of the initial governmental spending) and then trying to undo the problem by putting the truck into reverse and running the guy over again. All to make it better! The economy was already distorted by the initial spending, and then the problem is compounded by funding the spending. Additionally, politicians spend these funds on projects designed to keep themselves in power. Even the programs wrapped in the cloak of magnanimity, like welfare and social security, are designed to make us dependent on the government and their reelection.

Rothbard's History demonstrates how the repudiations of the 1830s and '40s did not cause the sky to fall. In fact, the return to sound money coupled with a liberalization of the economy spurred a tremendous amount of growth. Rothbard explains:

It is evident, then, that the 1839–1843 [monetary] contraction was healthful for the economy in liquidating unsound investments, debts, and banks, including the pernicious Bank of the United States. But didn't the massive deflation have catastrophic effects — on production, trade, and employment, as we have been led to believe? In a fascinating analysis and comparison with the deflation of 1929–1933 a century later, Professor Temin shows that the percentage of deflation over the comparable four years (1839–1843 and 1929–1933) was almost the same. Yet the effects on real production of the two deflations were very different. Whereas in 1929–1933, real gross investment fell catastrophically by 91 percent, real consumption by 19 percent, and real GNP by 30 percent; in 1839–1843, investment fell by 23 percent, but real consumption increased by 21 percent and real GNP by 16 percent. (p. 103)

So how much should we repudiate? I don't know. The amount should be big enough to scare reality into the investors of US Treasuries (and hopefully politicians), but not too big that it wipes out the retirement funds of those looking for the "safe" investment. Perhaps the Treasury should declare that they will pay 80 cents on the dollar, but that just rolls the clock back a few years (back only to $11.4 trillion!).

The sad reality is that without fundamentally changing the way the government spends, there is no solution. The four largest expenditures made by the government are, from greatest to least, (1) Social Security, (2) Medicare and Medicaid, (3) defense, and (4) welfare. We can't really print our way out of the mess, because Social Security payments, etc., are indexed to the CPI. We can't grow our way out either, because they're also linked to growth rates.

So repudiation is not a complete solution. It is a part of an overall solution of (real) spending cuts, economic growth, and debt repudiation.

It is clear that we cannot continue on this path. Politicians are like water — they follow the path of least resistance. Politicians will try to avoid making a decision, and the longer they delay, the worse the problem becomes. The reality is that there are no more fixes to be done. We are out of financial gimmicks. The day of financial reckoning is upon us; maybe we can kick the can down the road another election or two, but be prepared for higher taxes, currency devaluation, and possibly debt repudiation.