The Republicans and their Doomed Ideology 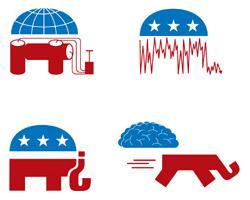 This is pretty much what it is like to be governed by Republicans, and there is no better case in point than George W. Bush. He, like all Republicans since the 1920s, campaigned as a shrink-the-government man. More incredible to recall, he blasted the "nation building" of Bill Clinton and insisted that the US needed a "humble" foreign policy.

What we got instead is, well, what we got, which is the polar opposite. The man who wailed over Bill Clinton's big government has made Clinton's spending record look great by comparison. The guy who decried "nation building" has decided that bombs and tanks are a great means to inspire a wholesale upheaval in the Gulf region.

What's interesting here is what motivates big-government Republicanism. The middle-class voters who support the party have a strong interest in shrinking government. But that also means that the party itself has no strong investment in the public sector as it currently stands, apart from the prison bureaucracy and the military. Most civil servants, teachers, and postal workers, for example, support the Democrats, knowing full well who is buttering their bread. Republicans, essentially, see the public purse as something not to conserve but to rob and give to those who do vote Republican.

Thus is the government contracted out — and vastly so. Thus are religious charities eligible for public funding. Thus are private schools encouraged to get on the dole. Thus are industrialists eligible for every privilege one can imagine. Heck, if you are big enough and powerful enough, the Republicans might even start a war on your behalf. This gets very expensive indeed, even more expensive than old-fashioned, reformed-minded, repair-the-schools, renew-the-cities, make-the-government-work social democracy!

And you know how the Left says that the Republicans care nothing for your privacy or for individual rights? The Republicans seem to be living up to a caricature of their reputation. Anyone who questions whether the FBI ought to be permitted to tap your phone or read your email, or whether the CIA ought to be able to lock people up forever without a formal charge, is denounced as a leftist.

Where have Republican grassroots been? Here we find disgrace. They were charmed by Bush going into all this, and they have not ceased to be loyal. Yes, along the way — this always happens — some of the rank-and-file become irritated that Bush isn't doing more to stand up to the Democrats. But a Republican White House always, always, always knows how to deal with this problem. The prez sets up a 15-minute meeting with "conservative leaders" at which they fawn all over him. They then report back to their minions that the president is a great guy and needs our support. Most people comply since they fear the devil Democrats more.

As for foreign policy, my goodness, the rank and file are gullible in the most ghastly way. These people went from scorning Clinton's exertions in Somalia to calling anyone who doesn't support the war on Iraq a traitor to America itself. The display of Nazi-style jingoism has been nearly unbearable. The flag is worshipped as a holy object, the national anthem is treated as a sacred hymn, every character in a military costume is canonized, and the president himself is exalted as a godhead incarnate. Now we know — because we are living through it — the stuff of which fascism is made.

We could go on. But rather than decry the hypocrisy, lies, and unrelenting bamboozlement, it would be more productive to examine the underlying social theory that leads Republicans to campaign one way and govern another. Elsewhere we discussed how the Democrats believe in a conflict-based model of society, with their imagined society consisting of groups of warring tribes (men v. women, blacks v. whites, etc.). In the same way, the Republicans imagine that the social order is rife with conflict, but a conflict of a different sort.

Republicans believe that all of society, whether your town, the nation, or the whole world, is divided between those who adhere to the law and those who are inclined to break it. These they define as good guys and bad guys, but it is not always true since the law these days is not the law written on our hearts but rather the rules as laid down by state masters. But this seemingly important point is completely lost on the Republican mind, since they believe that without the state as lawmaker, all of society and all of the world would collapse into a muddle of chaos and darkness.

This view they get from Hobbes. Not that the average buyer of Ann Coulter's books reads political philosophy. They rather accept a popular version of the fundamental anti-liberal idea: society is a wreck without Leviathan. This is why they celebrate the police more than merchants, why they think that war deserves more credit than trade for world prosperity, why they call drafted killers for the state the "greatest generation," whereas the pioneers of the 19th century are merely historical curiosities.

In short, their meta-understanding of politics bypassed the liberal revolution of the 18th century and embraced the anti-liberal elements of the Enlightenment. Up with Hobbes, down with Locke: that is their implied creed. Liberty is fine but order, ORDER, is much more important, and order comes from the state. They can't even fathom the truth that liberty is the mother, not the daughter, of order. That thought is too complex for the Manichean mind.

Now, it is true that Republicans tend to be better on issues of welfare, environmentalism, social legislation and the like. They reject egalitarianism, more or less, and have no strong beef with business. But none of this matters in the defense of liberty because they are intellectually wedded to the state in the most fundamental way. They believe that it and not voluntary cooperation is the source of order in society, and what they fear more than anything is revolution. Freedom, to them, is not a right but something conferred as a reward for good behavior.

It is a curiosity that these same people tend to herald the Declaration of Independence. This was a revolutionary document that postulated that government was the source of disorder, and imagined that society could be forged in absence of the state. The replacement government under the Articles of Confederation was a government in name only, and like the anarchy that Republicans fear more than anything else.

I once heard a leading Republican intellectual, a respected figure with lots of books on everyone's shelves, express profound regret when the Soviet Union was falling apart. The problem, from this person's perspective, is that this led to disorder, and order — meaning control even by the Soviet state — is the fundamental conservative value. That about sums it up. Even communism is to be tolerated so long as it keeps away what they dread more than death: people within their rights doing whatever they want.

But these days we see all around us how liberty generates order and how this order is self-sustaining. We live in private communities. We see the glorious world of the web. We benefit daily, hourly, minute-by-minute, from an order that is not imposed from without but rather generated from within, by that remarkable capacity we have for pursuing self-interest while benefiting the whole. Here are the great mystery and majesty of social order, expressed so well in the act of economic exchange.

Republicans by contrast live intellectually in a world long past, a world of warring states and societies made up of fixed classes that fought over ever-dwindling resources, a world unleavened by enterprise and individual initiative. They imagine themselves to be the class of rulers, the aristocrats, the philosopher kings, the high clerics, the landowners, and to keep that power, they gladly fuel the basest of human instincts: nationalism, jingoism, and hate. Keeping them at bay means keeping the world of their imaginations at bay, and that is a very good and important thing for the sake of civilization.