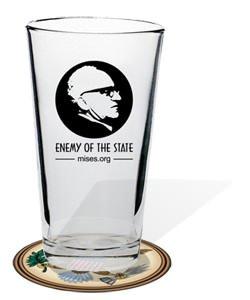 Somehow, and no one seems to even imagine how, this country managed to survive and thrive before 1984 without a national minimum drinking age. Before that, the drinking question was left to the states.

In the 19th century, and looking back even before — prepare yourself to imagine horrific anarchistic nightmares — there were no drinking laws anywhere, so far as anyone can tell. The regulation of drinking and age was left to society, which is to say families, churches, and communities with varying sensibilities who regulated such things with varying degrees of intensity. Probably some kids drank themselves silly — and we all know that this doesn't happen now (wink, wink) — but many others learned to drink responsibly from an early age, even drinking bourbon for breakfast.

Really, it is only because we are somehow used to it that we accept the complete absurdity of a national law that prohibits the sale of beer, wine, and liquor to anyone under the age of 21. This is a restriction unknown in the developed world. Most countries set 18 as the limit, and countries like Germany and Austria allow 16-year-olds to buy wine and beer. In the home of the brave, the police are busting up teen parties, shutting down bars, hectoring restaurants, fining convenience stores, and otherwise bullying people into clean living. We read the news and think: crazy kids, they shouldn't be doing this.

And yet every day, young people are finding ways around these preposterous restrictions that are hardly ever questioned, imbibing with their booze a disdain for the law and a creative spirit of criminality, along with a disposition to binge drink when their legal workarounds succeed.

On college campuses, the industry of the fake ID thrives as never before. It seems nearly true that almost every student believes himself or herself in need of getting one. Do the restaurants and bars know this? Of course they do. They have every interest in having these fake IDs look as real as possible to give themselves some degree of legal immunity if someone gets caught. The whole thing is a gigantic fakeroo, a mass exercise in open but unspoken hypocrisy, and everyone knows it.

If you think about it, it is the very definition of a state gone mad that a society would have a law of this sort spread out over an entire nation that tells people that they cannot drink before the age of 21 — even as most everyone in a position to do so happily breaks the law. In Virginia, in the colonial period, where the average lifespan was 25, this law would have provided only 4 years of drinking in the last fifth of one's life (but what a way to go).

However, if you think about the history of this country in the twentieth century, one might say that the age of 21 is actually rather liberal, as strange as that may sound. After all, it was in this country, the "land of the free," that the federal government actually added as part of its Constitution a total banning of liquor, wine, and beer from sea to shining sea (1920 to 1933). The 1920s roared, in any case, with organized crime, speakeasies, police corruption, rampant criminality, and alcohol abuse.

The mystery to me is not the failure of Prohibition but the sheer insanity of the attempt to do this in the first place. It seems utterly bizarre in a country that habitually proclaims its devotion to liberty and freedom that such a thing would have ever been attempted. But here is Amendment XVIII, passed in 1917, in the same epoch in which government was going to rid the world of despotism and stabilize all business cycle through scientific monetary policy:

Yes, it really happened, right here in the good ol' USA, and I'm grateful to Mark Thornton for documenting the politics and economics of the whole sad affair in his book The Economics of Prohibition. In a rare case of reversion and admission of error, the same constitution was later amended again: "The eighteenth article of amendment to the Constitution of the United States is hereby repealed."

But the habit of prohibition was already ingrained. For the state, it was two steps forward and one step back. For the rest of the population, what was previously a very normal part of life — drinking potentially intoxicating liquids, something integral to normal living from the Paleolithic era forward — took on a special ethos of hipness and derring-do. The father of our country might have been the largest distiller of whiskey in the late 1700s, but after Prohibition, liquor took on associations of decadence and bad behavior generally. A distiller today wouldn't be elected to the city council much less as the US President.

Now, it wasn't too many years ago that the laws tended to be a bit more reasonable, with the drinking age starting at 18. But that was changed with a universal law for the age of 21, and many people remember what this was like: for two years, a person was able to order a beer with a burger and, then one day, doing the same thing was a criminal act.

Digging around for explanations about these silly laws, there is one overarching argument: driving. We don't want drunken teenagers on the road. These laws have saved thousands, millions, of lives, and the desire to change them is the equivalent of harboring a death wish for a generation. Now, one libertarian response might be: then get rid of the public roads and let road owners manage whether and to what extent its drivers drink. That's a principled position but a bit impractical. The biggest problem with that response is that it concedes too much.

The closer you look at these studies, the fishier they appear. It turns out that most of the declines in binge drinking among high-school kids, according to a trends in drug use report,

took place before the change in the law, and, according to researchers Jeffrey A. Miron and Elina Tetelbaum, the changes in trends after are heavily biased by data sampling from a single state. Therefore, data on drunk driving, whatever the trends, cannot be statistically attributed to the national minimum-drinking-age law.

In any case, "underage" drinking is still sky high, even with the law, making cause and effect even more difficult to trace. As to why drinking is still high among college students, the National Institute on Drug Abuse offers the following polite reason: "Campuses provided some insulation from the effects of changes in the drinking age laws that took place during that interval." You can say that again. Human beings are remarkable things: when they want to do something, no amount of tyranny, even that of jail, can stop them.

Still, it is impossible to silence the screams of the prohibition advocates, who trace every car accident among teen drivers to alcohol. I find this all fascinating to read because it bears so much in common with the Prohibition literature from the 1910s and 1920s. Their propaganda blamed alcohol for the destruction of the family, the persistence of poverty, the high rate of crime, the problem of illiteracy, and the ubiquity of sin generally. Clearly, their arguments were widely accepted even though it is all a big and fallacious mix-up of cause and effect. It's not that liquor caused all these terrible things; it's that the people who engage in terrible behaviors tend to also be drinkers. Abolishing the drink won't fix the problems of the human heart.

So it is with teenage drinking. With the two thirds and more of people under the age of 21 reporting that they have consumed alcohol in the last year, it should be obvious that the law is doing nothing but providing a gigantic excuse for arbitrary police-state impositions on human liberty, and also socializing young people in a habit of hypocrisy and law breaking. It's like the old Soviet-style joke: they pretend to regulate us and we pretend to be regulated.

Still, shouldn't it be illegal for young people to drink and drive? Murray Rothbard sums up the libertarian point in For A New Liberty:

We've just been through our annual celebration of Independence Day, the day on which every radio and television commentator gives pious speeches about the glories of American liberty and all the sacrifices that have been made to preserve it.

Do we really believe it? The founders would have never imagined such a thing as a national law regulating the age at which beer, wine, port, and other alcoholic beverages are consumed. If we are serious about embracing their vision of a free society, as opposed to just blathering about it, let's start with something that is supremely practical and would have immediate effects on an entire generation: repeal the national minimum-drinking-age law.