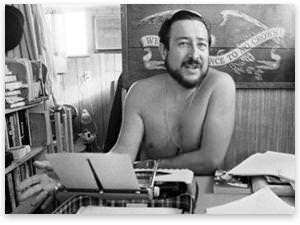 2003 was the 80th anniversary of the birth of Karl Hess, a beloved libertarian and public intellectual who was involved in most of the political debates from the 1960s until his death in 1994. His efforts on behalf of liberty were prolific, whether in over a dozen books or the life he lived in harmony with what he believed.

He is best known for penning "extremism in the defense of liberty is no vice...moderation in pursuit of justice is no virtue" as Barry Goldwater's head speech writer (his ability was reflected in Goldwater's nickname for him: Shakespeare).

He wrote In a Cause that Will Triumph (1967), Dear America (1975), and Neighborhood Power (1975). But his most influential work was probably his 1969 Playboy article "The Death of Politics." Published prior to the founding of the Libertarian Party, it has been singled out as a central influence in inspiring a revival of the libertarian movement. A short documentary on his life, "Karl Hess: Toward Liberty," even won two Oscars in 1981.

Hess came to his radical views after writing to Murray Rothbard and requesting to meet him. Rothbard invited him to New York. "It was a classical salon, a roomful of a dozen or so extraordinarily bright and witty men and women united by enthusiasm for liberty," wrote Hess. He later wrote for Rothbard's newsletters and co-edited the Libertarian Forum. And while he was involved in the Libertarian Party later, he was never really interested in politics as anything but a venue for airing dissent against the prevailing trends of our time.

Given his influence in reigniting the embers of what had been the flame of liberty at America's founding, it is worth commemorating Karl Hess by considering some of his powerful words.

Karl Hess lived as an illustration of his own advice: "We have the illusion of freedom only because so few ever try to exercise it. Try it sometime." He also did what he urged others to do: "keep slogging away...opposing restrictions against liberty." He was one of very few Americans to have really reflected Patrick Henry's immortal words, "Give me liberty, or give me death!" We can be grateful he did so with words of clarity and acuity, rather than the obfuscation so often resorted to when liberty is besieged by those who want power over other men:

Think of whether you have ever met a libertarian who is more a threat to you than is a willing, serving agent of the state. More irritating perhaps. More dangerous? I doubt it. Happily, such libertarians are far more easily ignored than the agents of the state.