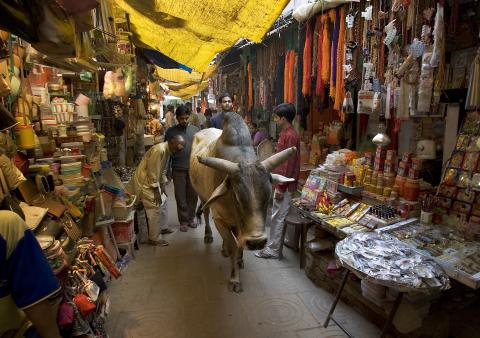 An acquaintance of mine has recently accepted a job in New Delhi to work for a top newspaper company at the salary of about $200 per month. He will work from 12 in the afternoon until 3 in the night. He will work at least six days a week. He can be laid off at the end of any month without compensation, at a two-week notice.

He has a university degree, and a certification in journalism. He will work 15 hours a day and he is relatively well educated, and is in a profession where people are supposed to be aware of their “rights.”

Print media is one of the few sectors in which foreign investment is not allowed in India—so multinational corporations are not to blame. The salary he is getting is less than the legal minimum. The working hours and other conditions are clearly illegal.  Who should get the blame? And should such regulations exist in the first place?

A reflexive approach—generally advocated, and more appealing to the hearts and minds of a lot—would call for more government control, increased surveillance, etc. India generates so many rules and regulations that the publication department of the government struggles to keep up with it (and usually no one knows what the rules are). The rules dominate every area of economic activity.

Economists would argue that government rules and minimum wage laws are the biggest cause of unemployment and poverty; and that government control takes away the individual initiative to enter into voluntary contracts, restricting the growth of a sophisticated and efficient web of contacts that provides sustainable growth, and stability.

But such a lack of economic efficiency would result in places where the laws were effectively enforced. In India, as in a lot of developing countries, this has a marginal importance: in real practice there are no minimum salaries and no control by the government on the working conditions as my acquaintance now experiences.

What would happen if an “honest” company came into existence, which paid government regulated salaries, and kept working conditions in accordance with the rules?  (Some more sensible people would call such investors stupid. They would say that we all have the right to ignore and fight against rules that infringe on our liberty.)

In an environment of high labor intensity artificially enforced by the government, it would be hara-kiri to pay your employees more than what the market could bear. If one company paid less than minimum salary everyone who wanted to stay in business would have to do the same. The businesses sold their goods for prices that were lower than what their costs with sales tax included would be—of course they didn’t pay taxes. Anyone who dreamt of paying proper taxes was a failure before he started.

In such an environment the distortions take place in a different way, and are much worse. What rules the roost is corruption and bureaucracy. It drives the decent and conscientious to the fringes of economic activity (and the best leave the country).  For those who go into business, it becomes the biggest cost of operation, and a huge drag on growth. People get a corrupt mindset, and those who do not want to participate in corrupt behavior get sidelined economically.

Only crooks can do business

It is indeed true that until the 80s the businessmen in India were mostly crooks and spineless. The reason was simple: doing business had little to do with what you produced, but rather to do with keeping the politicians and bureaucrats happy. You had to grovel, bribe and suffer to start a business—and the words cannot explain this, only the experience.

I have probably never met a taxi driver (or, just to digress a bit, a politician or a bureaucrat) in India who is not a crook. When the police want, they beat up the taxi drivers. Who would work in such an industry?  Would they not recover what they have to pay to the police as bribes from their clients? Unfortunately, the society overlooks such issues and makes decisions based on what they see (overcharging by the taxi drivers), without looking at what they decide not to see (the corrupt police) and fight to increase regulations against them.

The situation of the other industries is not very different. Starting a company requires as many as 40 clearances, each requiring groveling before the bureaucrat. Mutually contradictory and not uniformly enforced regulations result in constant harassment of the entrepreneur taking his focus away from his products. No wonder Indian products and those from such countries were so shabby.

Children and adults work for less than the bare minimum required to survive. Were this a story told a century back, it would be easy to accept this as a fact of life. It is a shame to have such a situation in the present state of technological development. Unfortunately, administrative expenses associated with dealing with corruption and bad regulations—all wasteful costs, with no substance—is the burden the poor bear.

Government laws not only create distortion by interfering in the market and increasing costs, they when not enforced uniformly, marginalize those who believe in respectable conduct and who could set more humane and professional benchmarks.

Those fighting for increased government would only make the situation worse.

But shouldn’t something be done?

This is a cliché, but is so often asked despite all the explanations.

Life is tough, but the State is not the solution; it is the problem. There are no magic remedies except letting the contentious engage economically, allowing them to set up nicer benchmarks, and to expand business, killing corruption as a means to make money and hence bringing in a situation where the mindsets of the “crooks” can change. Perhaps this is the only way to grant my acquaintance in the newspaper industry ore options.

If someone wants to make a difference in the poverty and morality of the developing countries, he would do better to fight corruption in the public office, in government rules that cannot be enforced fairly and uniformly, and in the pathetically inefficient judiciary. Freedom is the only long-run means to promote economic development and human rights.