The Real Reason for FDR's Popularity 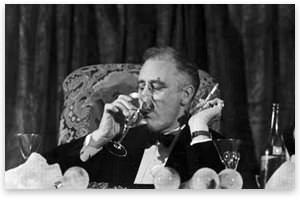 [An MP3 audio file of this article, read by the author, is available for download.]

"In his first thirty days, he did more to bring liberty to Americans than any president since Thomas Jefferson repealed the Alien and Sedition Acts."

All presidents worry about their popularity. They try to bolster it through impassioned rhetoric, free stuff for influential voting blocs, new programs that cost billions, dramatic photo ops, and of course wars to unite the country behind their valiant leadership. In most all cases, they choose means of gaining popularity that come at the expense of liberty.

But what if a president took a different direction and sought popularity by expanding rather than reducing liberty? There is a model here they could follow but it is not one you have thought of.

It is Franklin D. Roosevelt. In his first 30 days, he did more to bring liberty to Americans than any president since Thomas Jefferson repealed the Alien and Sedition Acts.

Roosevelt was inaugurated on March 4, 1933. After dealing with the banking crisis and the budget during his first week on the job, on March 13 he called on Congress to repeal Prohibition. On March 23, he signed the Cullen-Harrison Act, which legalized the sale in the United States of beer with an alcohol content of 3.2 percent.

He wasted no time: he signed it one day after Congress passed it. He said with great élan, "I think this would be a good time for a beer."

Only then, on March 16, did FDR begin to work on his New Deal agenda. Then he had the wind at his back. It was a dramatic beginning to the end of one of the greatest legal calamities in American history: the hated Prohibition embodied in the 18th Amendment, which had been in effect for 13 violent years.

Later that year, with the full support of the presidency, a new amendment to the Constitution repealed the old one. December 5, 1933, was the day of final liberation, following nine months of frenzy and excitement. FDR successfully claimed credit for this, achieving a reputation as a great liberator. His popularity reached astounding heights. The glow never left.

All was forgiven, in the same way that voters forgave Reagan's spending and failure to keep his promises following his dramatic tax cuts.

Most historians like to credit his New Deal for his popularity without considering what an amazing thing it was to have repealed Prohibition. He took office at the very lowest trough of the Depression, when unemployment was at its highest and when banks across the country were closing their doors. Things did improve a little under FDR, but the economy remained mired in depression throughout his presidency.

His vast increase in the size of government consisted of maintaining and expanding much of what Hoover introduced, as well as many programs like Social Security, which changed the economy of the 1930s very little. In addition, many components of the New Deal did not work or were counterproductive to economic recovery, just as we see today with bailouts, stimulus, deficits, etc.

Somehow the historians have failed to credit his popularity to one of the greatest restorations of liberty in American history. The majority of Americans were drinkers, and the alcohol industry represented something like 5 percent of the overall economy. Prohibition made alcohol much more expensive, harder to find, and generally of a much lower quality.

In fact, because hard liquor is easier to conceal, Prohibition had turned Americans from beer to rot-gut whiskey, which as the name implies was of low quality and often was dangerous to your health. While total alcohol consumption remained about the same during Prohibition as before, whiskey's market share rose from 40 percent to as high as 90 percent.

FDR had been a "dry" candidate, but as he built his campaign for the presidency in 1932, he agreed to become a "wet" in order to receive the Democratic Party nomination at the convention in Chicago. He made a campaign promise to overturn the 18th Amendment and to legalize drinking. He did exactly what he promised to do. The results for liberty and economy were immediate. FDR certainly gained an "ally" at Budweiser.

Distilleries, breweries, and wineries reopened and returned to their traditional businesses. Bottle makers, barrel makers, trucking companies, hop and grain farmers, and many other businesses began hiring and expanding their operations. It was hoped to create as many as half a million legal jobs, even if most of the jobs in the black-market economy were to be lost. In Milwaukee alone an all-inclusive license was issued covering over 4,200 taverns.

In addition, crime plummeted as crimes against Prohibition vanished and Prohibition-related crime dropped considerably. Corruption by politicians and law-enforcement officials dropped considerably, but did not disappear because prostitution and gambling remained prohibited and alcohol would remain prohibited in several southern and western states by state law. The most telling statistic was the murder rate, which dropped from almost 10 per 100,000 population down to 5 per 100,000 population, where it had been before wartime and national Prohibition.

Even though repeal meant a big tax cut for drinkers and a big boost to the economy and jobs, it did have the disadvantage of providing a big increase in tax revenues for government. In much of the 19th century, taxes on alcohol provided as much as 20 percent of federal revenues. State governments also collected taxes and fees on the alcohol industry, as did county and city governments. In fact, a national prohibition on alcohol would never have passed until the income-tax amendment passed in 1916 and provided an alternative revenue source.

David Beito has brilliantly shown in his book Taxpayers in Revolt that Americans rose up against taxes in the early years of the Great Depression. People could not pay their taxes and local governments could not afford traditional services. People arose across the country in group action to stop property-tax collection.

So, in addition to pleasing the drinking class, FDR also opened the revenue syringes from the custom house to your local bar and grocery store. Public-school budgets went back into balance and firemen were rehired. This was a tax that people did not mind paying because the cost of a legal drink with taxes was still much cheaper than during Prohibition without taxes. This is the reason the tax revolts came to a screeching halt.

Repeal was a win-win proposition. Imagine living during Prohibition, when having a few drinks could jeopardize the family budget, when politicians and law enforcement were completely beholden to organized crime, when gunfire on the city streets was a common event (or you could just visit downtown Detroit). Then imagine, almost overnight, prices plunging, employers hiring, politicians and organized crime reeling, and crime dropping dramatically. We may lament the end of those tax revolts, but the people must have relished the restoration of law and order and the turn toward normalcy.

In American political culture, what a president does in his first 100 days defines public attitudes toward him for many years. FDR's first 100 days are legendary for his bank legislation, his crazy programs, the Agricultural Adjustment Action, the NIRA, the TVA, the CCC, the regulation of stock markets, the confiscation of gold, his "fear itself" speech, and many other programs, all of which are recounted like a prayerful litany in every textbook.

We tend to assume that this is the reason people loved him. The end of Prohibition is hardly ever mentioned, even though this is the one action that had a direct, life-enhancing effect on every single American. This was the one thing that brought liberty and united the population in collective shouts of "hurrah!"

Happy Days Are Here Again was FDR's campaign theme song, and now it is the Democratic Party theme song, but few remember it was written for a movie to celebrate the imminent repeal of Prohibition. It isn't about government programs. It is about liberty!

The repeal of Prohibition then is the real reason for FDR's popularity. The success of repeal gave him a tremendous amount of political capital that helped shield all the silly and dysfunctional programs of the New Deal. The truth is that liberty works for the people and is very popular when tried. Likewise, the big-government policies of the Bush and Obama administrations are not popular and once again the people rise in protest.

We need to recall that what FDR did regarding Prohibition was once seen as politically impossible. John T. Flynn, in As We Go Marching, writes,

Before the last war, when prohibition by constitutional amendment was proposed, it seemed the most fantastic thing in this world. But a little touch of crisis — a war crisis — and the thing was done with bewildering swiftness. Then men said repeal was impossible. It would never be possible to get the assent of thirty-two states. Clarence Darrow, doughtiest anti-dry, said the hope was utterly illusory. Prohibition, he said, would die by the dead-letter route. Then came another crisis — the depression — and the Eighteenth Amendment vanished almost as swiftly as it came. Crises have a way of dissolving many things — often very old things and sometimes very precious things.

Robert Higgs is right that crisis usually leads to expansion of the state. It doesn't have to be this way. Someday, some politician will discover the logic of liberty and usher in a new era of liberty-enhancing actions. So long as politicians and historians remain confused by the real source of FDR's popularity, they will continue to be befuddled for why we don't thank them for their socialism. We love them when they get the government off our backs.