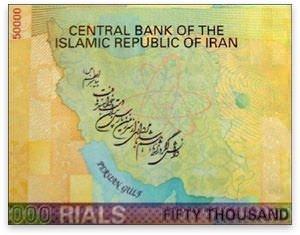 The Islamic Republic of Iran has just issued a new 50,000 rial banknote. An eye-catching feature of the banknote is the atomic symbol on its reverse side, an orange-hued representation of six electrons in orbit. Money has been "backed" by a wide range of things, from silver and gold, to central banks, to assertions of raw power. This atomic symbol represents quite an escalation in this regard.

While less explicit than its atomic symbol, another part of the banknote speaks to the continuing break-down of the Iranian economy. The denomination of the note — 50,000 rials — is much larger than that of the highest banknote previously in circulation — 20,000 rials; which 20,000 rial note was only issued three years ago. In both cases, the notes were issued because rampant inflation was making the currency of the country awkward for use as a medium of exchange. Prior to the 1979 Iranian Revolution, the economy was mostly a private property, market-oriented economy, and since, industry has been mostly nationalized and the economy directed from Teheran. Production and income, apart from the export of crude oil and natural gas, is down, and the ambitious spending programs of the government have been financed increasingly with paper money. Prior to the revolution, it took 70 rials to buy 1 US dollar. Today, the official exchange rate is 9,300 rials to 1 US dollar, and there is a vibrant black market in dollars.

Because of Iran's great oil wealth, it has been able, thus far, to stave off a hyperinflationary blow-off. Other countries have not been so lucky. Zimbabwe, today's poster child of hyperinflation, has collapsed into economic destitution, its population suffering from the outbreak of social diseases as well as from slow starvation. And, Zimbabwe's inflation has been modest when compared to other recent hyperinflations. In the chart below, I track the exchange rates (to the US dollar) of four currencies that recently went through hyperinflations, Argentina, Brazil, Yugoslavia and Zimbabwe. As you can see, the hyperinflation in Zimbabwe is just getting underway.

Hyperinflation has often been associated with a collapse of the political order along with a collapse of the economy, and even with the outbreak of war and genocide. In Yugoslavia, it culminated in the dismemberment of the country. In Zaire, things got so bad, they changed the name of the country (to The Other Congo) and the official language, and — would you believe it! — they had the French come in as peacekeepers.

In Bolivia, during their hyperinflation of the 1980s, the number one import was newly printed money from Germany and the number one export was illegal drugs to the United States. In Chile, during their hyperinflation of the 1970s, armed gangs of the "right-wing" and of the "left," roamed the country for food, leaving the people terrorized and the economy paralyzed. In Hungary, following World War II, the occupying Soviets used hyperinflation to destroy that country's middle-class and open the door for a communist take-over. Of course, during the Weimer Republic, the hyperinflation that was forced onto Germany by France and England following WWI similarly destroyed the middle-class of that country and ushered in the Nazis.

In the past, paper-money-fueled inflation quickly ran its course to ruin. The assignats of the French Revolution, and the Continental dollar of the American Revolution, for two examples, quickly ran their courses, one ushering in Napoleon, a dictator, and the other Robert Morris, a mere banker. But, with the perfection of the issue of paper money, central banks became able to embark on a course of a continuing, moderate rate of inflation, and so, exact a much larger "profit" (called, seigniorage) from the process. (I put scare quotes on the word profit because this isn't a true profit, or excess above cost, but a redistribution of wealth, from those possessing money to those owning the money-printing press.)

As shown in the above chart, Argentina and Brazil mastered the art of legal pick-pocketing, and, thus, proceeded to run very rapid rates of inflation for prolonged periods of time. However, so as to prevent hernias in the use of money as a medium of exchange, they had to print larger and larger denominations of banknotes (as Iran is now doing), and even they had to periodically call in the outstanding money and exchange it for new money at a ratio of, e.g., 1,000 to 1. Below, I show a 1,000 cruzado banknote of Brazil overprinted 1 new cruzado, illustrating how these currency exchanges worked.

Over the years, Brazil exchanged cruzados for cruzerios, new cruzados for cruzados, cruzerios reals for new cruzados, and reals for cruzerios reals. Thus, Brazil was able, over an extended period of time, to aggregate even more inflation than the former Yugoslavia, or in Germany during the short-lived period of the Weimer Republic. In the ancient world, Rome had similarly mastered the art of legal pick-pocketing through debasement of the coinage. Over time, the denarius of Rome became increasingly orange, as the coins were recast with less silver and more copper, with periodic exchanges of nearly all-copper denarii for new silver denarii at exaggerated exchange rates.

But, the process of inflationary finance did not originate with the Romans. It can be traced much further back, to soon after government got into the business of "attesting," with its stamp, to the weight and fineness of coins, as it didn't require a great deal of intelligence to realize that the government could force people to accept its money at face value, via legal tender laws, independent of weight and fineness. The Greeks were so familiar with cumbersome bronze, tin, and iron coins that were forced upon them by their governments, that the playwright Aristophanes wrote, in The Frogs, "In our Republic, bad citizens are preferred to good, just as bad money circulates while good money disappears." And the prophet Isaiah reminded Israel that it had sinned and needed to repent, saying, "your money has become dross."

Also written on the new Iranian banknote, in Arabic, is a quotation of the prophet Mohammed, that the scientists of Persia would reach to the heavens for knowledge. If the government of Iran were scientific, it would heed the science of economics and desist from inflation before it totally ruins its own country.