GET NEWS AND ARTICLES IN YOUR INBOXPrint
A
A
Home | Mises Library | That Quiz! 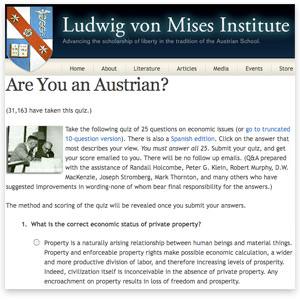 Economists are everywhere in the media these days, arguing with each other and pronouncing on what precisely needs to be done to fix our economic problems. The majority say that the government needs to spend and inflate like crazy, while others say that this will not only fail to fix the problem but will prolong the downturn.

The opinions of economists are not random. They can be classified into schools of thought, and to schools within schools. It's too bad that the radio and television announcers can't just say this before the economist ever opens his mouth.

"Now we have a word from Professor Jones, who was trained according to the Keynesian tradition, and advocates Keynesian-style policies as dictated by a Keynesian model."

Or, "Now we turn to Professor Smith, who adheres to a Marxian paradigm that regards capitalism as a moral outrage that is destined to collapse according to the implacable laws of history."

Or, "Professor Walker is a Chicago-school economist who generally appreciates markets but believes in monetary intervention based on a positivist understanding of economic method."

But of course the economists themselves do not want to be so classified. They would rather be seen as objective scientists — and anyone who disagrees with them to be guilty of fallacy or to be inadequately familiar with empirical reality.

As for the news reporters themselves, they are famously ignorant of economics and profoundly intimidated by the subject in general.

There are three criticisms that have been offered of the quiz.

First, it is said that we are wrong to so strictly classify schools of thought. There are only good economics and bad economics. Of the latter statement, we can agree. But even though economists no longer believe in classifying themselves — everyone claims to be eclectic these days — the divisions into systematic categories are still with us, as the response to the present crisis illustrates.

People can look at the same set of facts and interpret them differently, and the differences boil down to deeper assumptions about how the world works. For example, what can one make of the current downturn? Is it some foul wind that has blown our way, like a natural disaster? Or is it a welcome response to a previous distortion that had to be corrected and should be allowed to correct itself?

What the quiz does is highlight these differences so that we can make sense of what people are saying.

Second, people say that it is too hard. Well, the response to that is that economics is hard, or rather challenging. It deals with serious material that goes beyond intuition. Proof of that is that its insights are too often detached from other disciplines such as philosophy and history that actually require economic understanding to be truly complete.

Its difficulty underscores that economics requires careful thinking and study. It isn't enough to merely study the ancients or read the historians. Economics has much to teach everyone, and it takes more than a few seconds to absorb its main insights.

In any case, economics is unavoidable. It does no good to deny that it matters, as many people do. We all live and breath economics everyday. Nor should economics be left to specialists. It is a field of knowledge that is within the competence of everyone. No one should fear it, or fear speaking on the subject.

Third, people complain that quiz too seamlessly integrates pure theory with policy, moving from theoretical understanding to political implication too rapidly, whereas it should defer to the Austrian insistence that theory is value free and can be discerned and defended apart from libertarian ideas.

This is a valid criticism, and true as far as it goes. But the purpose of the quiz is to highlight the difference between the Austrian School (not just theory) and the other schools of thought (Marxist/institutionalist, Keynesian/neoclassical, Chicago/RatEx) and these schools do not regard their theory and policy as separate.

So on both these grounds, the current structure is defensible. That said, there is always and everywhere room for improvement!

Let's say you aspire to get a 100% on the quiz. There is no better time than now to start to study economics. I'm really hip on Faustino Ballvé's Essentials of Economics as an excellent starting place for the serious student. For the advanced student, there is a new indispensable tool: Human Action and its historic-first Study Guide.

Without economic knowledge, the world as it works will forever remain a strange and mysterious place.