Paul Krugman is despairing of late, because a growing number of mainstream economists are adopting (versions of) Austrian business-cycle theory. The most recent convert is Minneapolis Fed president Narayana Kocherlakota.

Krugman uses the occasion to criticize what he derides as "the hangover theory" of economic slumps, in which high unemployment is necessary after an artificial boom. As happened with his earlier criticism of "the hangover theory," here too Krugman buttresses his Keynesian logic with a misguided appeal to the data.

As I'll demonstrate, once we look at more relevant statistics the evidence comes down squarely in favor of the Austrian view, not the Keynesian.

At least some members of the FOMC have bought into the hangover theory — the modern version of liquidationism in which mass unemployment is somehow necessary in the aftermath of a burst bubble:

[From a WSJ story:] Narayana Kocherlakota, president of the Minneapolis Fed, argued that a large part of today's unemployment problem is caused by issues the Fed can't solve, such as the mismatch between the skills of jobless workers and the skills that employers wanted.

Here's what Kocherlakota said in a speech after the meeting:

Whatever the source, though, it is hard to see how the Fed can do much to cure this problem. Monetary stimulus has provided conditions so that manufacturing plants want to hire new workers. But the Fed does not have a means to transform construction workers into manufacturing workers.

I tried, in that old piece on hangover theorists, to explain what's wrong with this view in general. Among other things, "this story bears little resemblance to what actually happens in a recession, when every industry — not just the investment sector — normally contracts."

And this is strikingly true this time around. Kocherlakota would have us believe that there's a big problem of mismatch because manufacturing is trying to hire, while construction has slumped. But here's the employment reality: 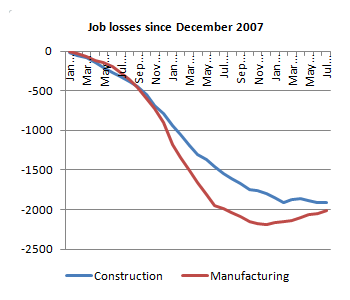 Manufacturing employment has slumped, not risen — in fact, it has fallen more than construction employment. The problem is lack of overall demand, not worker mismatch.

Krugman vs. the Austrians

It's true that Kocherlakota's particular story is self-serving ("Hey, don't blame the Fed; we've done all we can!") and it also doesn't explain the big drop in manufacturing through 2009. However, Krugman's riposte by no means disposes of the complete Austrian explanation of what has happened to the US economy.

First of all, Austrians can easily explain why there is a general drop in employment after a bubble pops, rather than just drops in (say) capital-goods industries. The problem in the aftermath of a bubble isn't merely that a "given" level of demand switches from one sector to another. On the contrary, people in general are poorer than they thought they were at the height of the boom.

In particular, during the boom, people unwittingly consumed capital. In a simplistic Keynesian model with "no time and no capital," it's not surprising that Krugman finds the Austrian story nonsensical. But as I spelled out in my "sushi article," a distortion in the interlocking capital structure of a modern economy can quite obviously lead to a general rise in unemployment across many sectors, as the mistaken investments are flushed out of the system.

In the second place, the US (and world) economy right now isn't suffering merely from the need to rearrange resources in light of the unsustainable housing boom years. No, the Keynesian and monetarist wizards in the government and Federal Reserve have unleashed a string of deadly blows to the already weakened economy.

Think of it this way — even if the economy had been perfectly healthy in the summer of 2008, Austrian economists would have been horrified at the damage of the ensuing policies: the government seized Fannie and Freddie, thereby effectively nationalizing a large portion of the entire US housing market; the Fed nationalized AIG; the treasury secretary told everybody that he needed $700 billion pronto to patch up the financial sector or the world would end; the treasury secretary then proceeded to partially nationalize the US financial sector; the federal government took over two of the Big Three car companies and threw traditional creditor rights out the window; the Fed more than doubled the monetary base in six months' time; the new Obama administration borrowed almost $800 billion to spend on "stimulus"; the federal government has taken a giant leap forward to socialized medicine; and just for kicks, the federal government also banned offshore drilling (though the rules are yet again undergoing revision).

Now say what he will about the Austrian economists, surely Dr. Krugman will concede that they opposed the above actions, and that they would have predicted at any time that these policies would lead to economic stagnation. (For example, here, here, and here.)

My point here is that it's no surprise the US economy is suffering a slump throughout all major industries, even though it's been years since the housing bubble peaked. Those of us Austrians who have been warning of price inflation have not (yet) been vindicated, but we have definitely been on the record from the get-go that these massive government and Fed interventions would cripple the economy.

Looking at the Employment Data

Thus far some readers may be suspicious that I'm trying to wriggle out of Krugman's headlock by changing the terms of the debate. So by all means, let's put aside the fact that the economy has had bombs dropped on it after the housing bubble popped. For the sake of argument, let's go to the employment data and test an Austrianized "hangover theory."

Now before we look, what would an Austrian expect to find? Well, he would expect a general drop across the board as people experienced the shock of the housing (and stock market) crash, and consequently postponed as many purchases as they could. This "hoarding" corresponds to a legitimate change in the way real resources are deployed: when everyone realizes there aren't enough capital goods to support the structure of production, things need to come to a screeching halt while entrepreneurs reevaluate their operations in light of the new information.

Besides general observations about the economy as a whole, Austrian business-cycle theory makes predictions (other things being equal, of course) about the relative impacts on particular sectors. For example, the "higher-order" (or more capital-intensive) sectors of the economy would crash much harder than the "lower-order" sectors, such as retail. (For an introduction to Austrian business-cycle theory, see Roger Garrison's amazing PowerPoint shows.)

Guided by Austrian business-cycle theory, we would also expect to see the retail sectors begin to recover earlier than the more capital-intensive sectors. In other words, in the immediate aftermath of the crash, total employment would go down. The heavy industries would be hemorrhaging jobs, but the sectors closer to final consumption would also lay people off.

However, at some point the retail sectors would turn around, and begin hiring. These sectors would start to draw down the accumulating pool of unemployed workers, even as the capital-intensive sectors still piled on newly laid-off workers. As more time passed, the trends would flip, so that the recovering sectors would be hiring more new workers on net than the capital-intensive ones were laying off. At this point, the total number of unemployed workers in the economy would begin falling. Finally, even the higher-order industries — the ones furthest up the chain of production in a chronological sense — would find their bottom, and they would begin hiring workers on net.

In contrast to the Austrian story, what does the Keynesian view predict? Well, if a recession is really just about a general drop in aggregate demand, then we shouldn't see any particular relationship among individual sectors, and how they respond both in magnitude and across time. If you reread Krugman's commentary on his chart, that's exactly what he himself says the Keynesian story means.

The problem with Krugman's chart is that he shows absolute job losses. So yes, "[m]anufacturing employment … has fallen more than construction employment," but that's because there were more people in manufacturing in the first place. 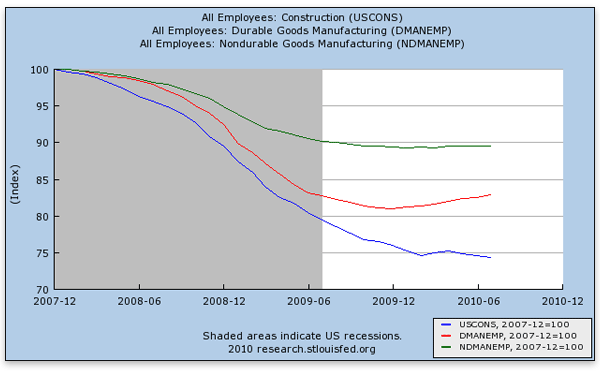 I submit that the above chart is entirely consistent with the Austrian explanation of business slumps following an unsustainable boom period. Contrary to Krugman's misleading chart, in percentage terms the construction sector has taken a larger hit than "manufacturing" in general, and construction has been brutalized compared to the mild downturn in nondurable-goods manufacturing.

Moreover — and this is presumably what motivated Kocherlakota's comments — a naive extrapolation of year-to-date trends suggests that the manufacturing sector has bottomed out and is on the road to recovery. Construction employment, on the other hand, is still falling.

Austrian economists are correctly wary of aping the methods of the natural sciences. In economics, it's far more important to have a logically coherent theory than a multivariate regression with a "high R-squared."

Even so, a true theory will be consistent with the empirical evidence.1 As the data on construction and manufacturing employment show, the Austrian story of recessions fits the facts better than the Keynesian explanation.