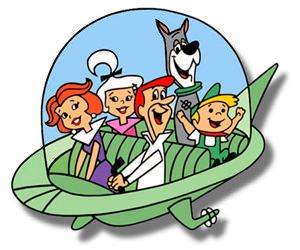 In the classic and futuristic television series from 1962 to 1963 — I admit that I adore this show and could watch every episode 100 times — people work only a few hours a day, travel at 500 miles per hour in flying cars that go as fast as 2,500 miles per hour, and the main job is "pushing buttons."

The galaxy is their home. Healthcare is a complete free market with extreme customer care. Technology was the best (but of course it still malfunctions, same as today). Business is rivalrous, prosperity is everywhere, and the state largely irrelevant except for the friendly policeman who shows up only every once in a while to check things out.

The whole scene — which anticipated so much of the technology we have today but, strangely, not email or texting — reflected the ethos of time: a love of progress and a vision of a future that stayed on course. Appropriately, it was the first show shown on ABC television in color instead of black and white. It was neither utopian nor dystopian. It was the best of life as we know it projected far into the future. People did not dress in uniforms or obey some dictator on a monitor in their homes. The people in the show were as fashion conscious as any American. Their food was not embedded in pill form. They had the equivalent of fast-food delivery services in their homes.

The message is a true one. Human nature and the structure of reality itself doesn't change. Only the gizmos we use change. We can become poorer or we can become richer. But the fundamental facts of how the world is built are immutable. Things are scarce but the possibilities for economic creation are infinite in a world of trade, boundaries, law, and private innovation.

Why is it so fun to watch? Because it is a cartoon, because neat gadgets are everywhere, but mostly it amuses us because everyone seems so strangely blasé about all the miracles that surround them. They are living in postmodern houses that seem to be braced on some giant poll in the sky, and yet they think and act just like the rest of us who live on the ground. They aren't surprised by anything, no matter how amazing.

And despite the extraordinary conveniences of life, the essential problems are the same, the human vices documented since the beginning of the written human language. The kids have the same trouble as our kids. "Daughter Judy" is spoiled and pouts too much; "his boy Elroy" gets into trouble; George tries in vain to solve all troubles but is mainly concerned about keeping his job; and "Jane his wife" keeps the home together.

The persistence of choice leads to complaints that there isn't enough. "Pushing buttons" is the main thing everyone complains about. When they want to get away and relax, they usually choose some enterprise that offers the experience of a made-up world of the past that seems to take them back to the Old West (the "Beta Bar Ranch") — but it is only pretend. We have the equivalent with our fantasies of "returning to nature" by shopping at grocery stores with philosophies, or believing that by not printing "this email" we are saving the planet.

In what other ways is our world like theirs? We too are surrounded by amazing miracles generated by private enterprise and entrepreneurship. Every day we wake up to some overnight development that makes our lives slightly better. The advances have come along so quickly that articles on technology written just a few years ago now strike us as old-fashioned.

In The Jetsons, the vacuum cleaners work without pushing them, and, sure enough, we have those, too.

Boy Elroy has a machine that can conjure up real-time worlds that allow him to play baseball and tennis with family members. We call that the Wii. The vacuum cleaners work without pushing them, and, sure enough, we have those, too. The video phone is the great dream that this show dreamed up. You had to pay. When you call long distance (does anyone remember that?) "collect" (does anyone remember that?), you had to accept or reject the charges. The video phone was strapped to the ceiling and couldn't be moved, just like telephones were until the day before yesterday.

Peter Sidor, a heavy hitter at the Mises Wiki, recently called my Skype app on my iPhone, something I downloaded the other day just to test it out, and I answered and, voilà, I'm video talking to a colleague in Germany. I walked around with my phone. The app was free. Skype begs me to use the service. The iPhone 4 came with FaceTime built in, not that the appearance of this miracle created much chatter at all.

All this stuff is amazing. It is astounding and beyond belief — more outrageously advanced than anything the makers of The Jetsons could even imagine. With this tiny box in my hand, I can do a real-time video chat with anyone on the planet and pay nothing more than my usual service fee. This means that anyone on the planet can do business with and be friends with any other person on the globe. The borders, the limits, the barriers — they are all being blasted away.

The pace of change is mind-boggling. Email has only been mainstream for 15 years or so, and young people now regard it as a dated form of communication, used only for the most formal correspondence. Today young people use instant messaging through social media, but that's only for now — and who knows what next year will bring.

Oddly, hardly anyone seems to care, and even fewer care about the institutional force that makes all this possible, which is the market economy. Instead, we just adjust to the new reality. We even hear of the grave problem of "miracle fatigue" — too much great stuff, too often. Truly, this new world seems to have arrived without much fanfare at all. And why? It has something to do with the nature of the human mind, which does not and will not change so long as we live in a world of scarcity. We adjust to amazing things and don't think much about their source or the system that produces them.

The Jetsons' world is our world: explosive technological advances, entrenched bourgeois culture, a culture of enterprise that is the very font of the good life. But there is one major difference, and it isn't the flying car, which we might already have had were it not for the government promotion of roads and the central plan that manages transportation. It is this: we also live in the midst of a gigantic leviathan state that seeks to control every aspect of our life to its smallest detail.

The government is still Flintstones, an anachronism that operates as this massive drag on our lives. With its money manipulations, regulations, taxation, wars (on people, products, and services), prisons, and injustices, we similarly look the other way. We try to find the workaround and keep living like the Jetsons. Oftentimes things don't go right, and the reason is the anachronism that rules us. And yet, unless we understand cause and effect in the way that the old liberal tradition explained it, we can miss the source.