Privatize the Highways — and All Roads for That Matter 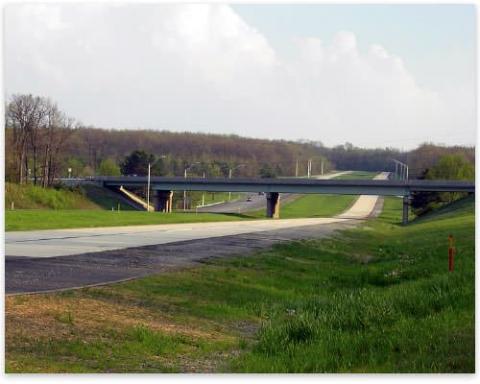 The failure of the current state-sponsored system of highways is nowhere more evident than in Somerset County, Pennsylvania. Here, the expressway of US Route 219 (also known as the John P. Murtha highway and the Flight 93 Memorial Highway) goes under an overpass and then ends abruptly in a forest.

It is not uncommon for me to read several letters or articles a month in my local newspaper devoted solely to the topic of finishing US Route 219; but no matter how angry people sound, or how seriously politicians speak of finishing 219, it remains a monument to the failures and inadequacies of government-monopolized transportation.

If we truly wish to have 219 — or any other highway or road for that matter — finished, then we ought to be advocating for complete privatization of the highways. Privatization would ensure that the project would be finished in a timely manner, would remove the moral hazard of building a possibly unnecessary highway with public funds, and would not force every individual to fund the project, whether they wish to use it or not.

Let us begin with why the market would be a more efficacious tool for completing the highway. The free market has proven throughout history to be a better judge of the enterprises than any government. By opening up the opportunity to finish Route 219 to private companies, these ventures would be able to test the market to see what exactly is necessary for the completion of Route 219.

Should a company decide that any highway is a viable venture for their ownership and stockholders, then it would be on that company to build a product that consumers would wish to use. If several companies wished to build a highway, then whichever company offered the best product (i.e., the best-maintained, cheapest, fastest highway) would be chosen by consumers to deliver that product via the price system.

When government has a monopoly on any market, competition is stifled, and the ultimate losers are not only the companies who could have invested in a designated area, such as the Somerset County area, but also the consumers, who are forced to settle for a noncompetitive, usually subpar product.

But central planners maintain the guise of competition by auctioning off the rights to build their central plans.

In a free-market system, the signals sent via the price mechanism allow the market to adjust to any changes much more quickly and efficiently than the current centrally planned model under which we operate.

Knowledge is not something that can be aggregated and centrally planned by a Department of Transportation. Knowledge is something that must be acquired in small bits throughout the market. Risks must be taken to acquire knowledge; and no one man, nor any group of men for that matter, can possess the knowledge necessary to perfectly plan any specific endeavor.

So why leave this, what Friedrich Hayek, the Austrian economist and Nobel laureate, called the "knowledge problem," to a group of individuals who are insulated from the signs and information of price signals? Major investments — especially those that require a large amount of information to properly operate, such as highways — should be left to the system that best responds to market signals and the price mechanism: the free market.

Moreover, there is a major moral issue at play when building any public-works project, but especially highways: Who pays for the highway and with what money? Under the current system, public-works projects are paid for by "the public." But what gives central planners the moral authority to determine that all taxpayers in a given population should be forced to pay for the planners' project?

While it could be argued that public highways benefit an entire area, should those who decide against using the highway and its related infrastructure be forced to pay for it? This is perhaps the largest flaw in any argument favoring the public completion of Route 219 — using public funds to finish a highway that each member of the public has not directly consented to is coercion.

The state is not some kind of benevolent deity that reaches out from Harrisburg or Washington and grants the public its own highways; the state must fund its creations, and because the state cannot create wealth, it must forcibly take this wealth from the populace.

The French political economist Frederic Bastiat expands on this concept of destroyed wealth in his essay "What Is Seen and What Is Not Seen." He can be summed up in a simple quote:

A private system would remove this moral dilemma by not requiring funding from all individuals in a community. The private sector has proven to be magnificently creative in ways to fund new initiatives. With the emergence of the "information superhighway," we have seen new ways to provide funding for private services without necessarily charging tolls or collecting sweeping taxes. The Internet has shown that many private services can appear to be zero price for many consumers; it would be foolish to believe that other markets may not work in the same manner.

To assume beforehand that the private sector will provide a service in one specific way would overlook the ingenuity of the free market. But one thing is for sure: the free market would not force consumers who do not wish to use the product to pay for it.

The call for highway privatization may seem radical, but it is not. Several major highways across the United States are privately owned, including the Chicago Skyway and the Dulles Greenway. Economist Walter Block wrote in his book The Privatization of Roads and Highways that "we must realize that just because the government has always built and managed the roadway network, this is not necessarily inevitable, the most efficient procedure, nor even justifiable."

We should not look to the government to save us from its own failed projects; instead we should look to the private sector. Government-sponsored monopolies should be abolished where they seem to be most integral to our society, which starts with areas like the highways.

Zak Slayback is a founding team member of Praxis and the author of The End of School: Reclaiming Education from the Classroom. He writes regularly at www.zakslayback.com and is one of LinkedIn's most influential writers on education.