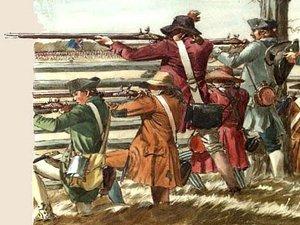 In Ferguson, Missouri, when police and national guard failed to protect businesses from rioting protestors, a private organization called Oath Keepers stepped up to fill the gap.

The presence of Oath Keepers, keeping the peace where police officers failed, helps answer a larger question: how necessary are police?

The heart of the state’s justification has always been that it can provide essential services that the market cannot, chief among them security. While admitting that police abuses were problematic, Miguel Guadalupe of the Huffington Post asserted that, “one thing is certain — [sic] a strong body of law enforcement, and one that is held in respect and prestige, is critical to the stability of a society.” Even minarchist scholars such as Locke and Hazlitt have assumed that, while markets may surpass government in a variety of activities, the state must always exist to provide a framework of security.

Anarchist scholars have critiqued this claim. But, as convincing as theories on private protection are, there are no large-scale society-wide examples of private self-defense in recent decades. There are no countries that lack monopolist state organizations: even supposedly 'anarchist' countries like Somalia remain ruled by central governments.

Small-scale examples have become more widespread, however, and I propose that we’re seeing a test of the feasibility of private protection services right here in the United States. It’s not a test of anarchy as a whole — I don’t see Oath Keepers packaging private law for the market, for instance — but it’s a test of one of the state’s key claims to legitimacy.

As police forces fail some communities, private organizations are stepping up. Oath Keepers stationed volunteers on the rooftops of businesses in Ferguson, protecting them from looters. Local business owners said they felt safer knowing the private entity was looking out for them.

The Threat Management Center provided similar protection when Detroit collapsed. The organization provided “Lamborghini-quality” security services to upscale neighborhoods, and the profit margins from these contracts enabled them to provide free services to poorer communities that rarely saw aid from police.

Peacekeeper is a free app that takes private protection in another direction. Rather than rely on a third party security service, Peacekeeper enables users to build networks of friends, family, and neighbors that they can rely on in a crisis. These people can often respond to an emergency in minutes or faster, because they’re coming from across the street instead of across town. Additionally, relying on people you know removes the danger of calling 911 and having a bad cop show up.f

These organizations, and others like them, represent a test of state security — and, by extension, of the state itself. Police find themselves unable to protect Detroit, Ferguson, and poor and minority communities. There are conflicting arguments for why this is: critics may allege racism in police forces, while defenders will argue that police simply don’t have the manpower to be everywhere. But in this case, the reason isn’t important.

When people living in these places cannot rely on police, they look for an alternative to fill that gap in protection. On a community and neighborhood level, they are looking for the framework of security that government claims only it can provide. If they seek our private frameworks and find themselves less well served than they currently are by police, it will suggest — though not prove — that the minarchists of the world are right to believe that government-provided security is important to society

On the other hand, if residents of these neighborhoods reach out to private organizations and find themselves safer and more secure than they used to be, it will further undermine the state’s case for itself. The state monopoly on security will be seen to be no more necessary — or wise — than a state monopoly on food production.