President Coolidge and the Laffer Curve 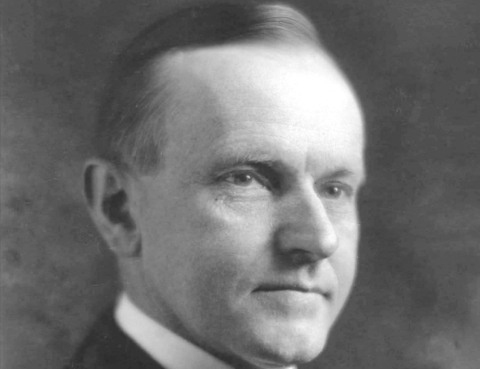 Amity Shlaes has been busy promoting her new biography Coolidge and in the process is making a strong argument for real tax and budget reform as a foundation for increased sustainable market driven prosperity. She made the case very strongly in her Hillsdale College lecture of January 27, 2013, “Calvin Coolidge and the Moral Case for Economy.”

Shlaes discussed the “‘scientific taxation’—an early formulation of the Laffer Curve” advanced by Coolidge and his Treasury Secretary Andrew Mellon. Coolidge argued against higher tax rates, saying, “Experience does not show that higher rates produces larger revenue. Experience is all the other way. When the surtax on incomes of over $300,000 and over was but 10 percent, the revenue was about the same as it was at 65 percent.”

Coolidge was truly interested in reducing the footprint of government on the economy, and thus had wise reservations about using rate cuts simply as a tool to expand revenues, as would later be advocated by supply-sider believers in the Laffer Curve. According to Shlaes,

… so much so that he considered foregoing [emphasis original] the rate cuts: “While I am exceedingly interested in having a tax reduction … it can only be brought about as a result of economy,” he said at one point. He would not put tax cuts before budget reductions [emphasis mine] insisting in twining the two goals.

Rothbard, writing in 1982, in his introduction to the fourth edition” to America’s Great Depression (xviii-xix) strongly echoed Coolidge’s insistence on spending cuts accompanied by tax rate cuts as a tool to shrink government and to expand liberty and prosperity:

This brings us to a new economic viewpoint that has emerged since our last edition—“supply-side economics” and its extreme variant, the Laffer Curve. To the extent that supply-siders point out that tax reductions will stimulate work, thrift, and productivity, then they are simply underlining truths long known to classical and to Austrian economics. But one problem is that supply-siders, while calling for large income-tax cuts, advocate keeping up the current level of government expenditures, so that the burden of shifting resources from productive private to wasteful government spending will still continue.

The Laffer variant of the supply-side adds the notion that a decline in income tax rates will so increase government revenues from higher production and income that the budget will still be balanced.

Another problem is that one wonders why the overriding goal of fiscal policy should be to maximize government revenue. A far sounder objective would be to minimize the revenue and the resources siphoned off to the public sector.

Thus Rothbard strongly advocated that the way to attack a budget deficit was to shrink government, not expand revenues. Such a program was also one of the positive actions government could take to speed recovery in an economy suffering depression. While Rothbard argues (America’s Great Depression, p. 21) that the “the most important canon of sound government policy in a depression, then, is to keep from interfering in the adjustment process,” Rothbard (p. 22) also recommends:

There is one thing the government can do positively, however: it can drastically lower its relative role in the economy, slashing its own expenditures and taxes, particularly taxes that interfere with saving and investment. Reducing its tax-spending level will automatically shift the societal saving-investment–consumption ratio in favor of saving and investment, thus greatly lowering the time required for returning to a prosperous economy. Reducing taxes that bear most heavily on savings and investment will further lower social time preferences. Furthermore, depression is a time of economic strain. Any reduction of taxes, or of any regulations interfering with the free market, will stimulate healthy economic activity; any increase in taxes or other intervention will depress the economy further. [notes omitted]

A major lesson that should have been learned from the Coolidge experiment is very consistent with Rothbard’s argument of 1982. According to Shlaes:

When tax rates are set and judged according to how much revenue they bring in due to the Laffer Curve—which is how most of today’s tax cutters present them, thereby agreeing with tax hikers that the goal of tax policy is to increase revenue—tax policy can become a mechanism to expand government. The goals of legitimate government—American freedom and prosperity—are left by the wayside. Thus the best case for lower taxes is the moral case—and as Coolidge well understood, a moral tax policy demands tough budgeting [emphasis mine].

Shlaes presents Coolidge as an alternative model for conservatives especially compared to a more recent idol, Ronald Reagan. Shlaes’s criticism of President Reagan is very similar to Rothbard’s. Shlaes points out that Reagan “was of course a tax cutter, reducing the top marginal rate from 70 to 28 percent. But his tax cuts—which vindicated supply-side economics by vastly increasing federal revenue—were bought partly through a bargain with Democrats who were eager to spend that revenue. Reagan was no budget cutter—indeed, the federal budget rose by over a third during his administration.”

Rothbard would say that Shlaes is only half right. Reagan indeed was no budget cutter. But he was no tax cutter either. Rothbard pointed out that Reagan’s

much-heralded 1981 tax cut was more than offset by two tax increases that year. One was "bracket creep," by which just inflation wafted people into higher tax brackets, so that with the same real income (in terms of purchasing power) people found themselves paying a higher proportion of their income in taxes, even though the official tax rate went down. The other was the usual whopping increase in Social Security taxes which, however, don’t count, in the perverse semantics of our time, as "taxes"; they are only "insurance premiums." In the ensuing years the Reagan Administration has constantly raised taxes – to punish us for the fake tax cut of 1981 – beginning in 1982 with the largest single tax increase in American history, costing taxpayers $100 billion.

Libertarians, however, should be cautious of accepting Coolidge as an ideal classical liberal or libertarian-leaning president. Some of Rothbard’s reservations about him can be found here. John V. Denison in his introduction to Reassessing the Presidency (xxiii) provides a more realistic assessment:

Some might argue that the administrations of Presidents Harding and Coolidge demonstrate a rebirth of classical liberalism, but I question this. They certainly did not seem to have the commitment to classical liberalism that Cleveland did, and they were greatly affected by the results of President Wilson's war and his despotic domestic policy during the war confirming Robert E. Lee's prediction that the consolidated federal government would become "aggressive abroad and despotic at home." The successive Harding and Coolidge administrations attempted to return America to "normalcy" after the war was over, but while they both stood for the principle of reducing government spending, as well as the excessive rates of Wilson's income tax, they were still "good" Republicans who advocated a higher protective tariff to help business. They also were caught up in the ideas of the "Progressive Era" and supported much government regulation of industry, like the radio, so long as government also remained in a partnership with industry.

Coolidge, on spending and taxation, was however very Rothbardian well before Rothbard. Per Shlaes, “Coolidge didn’t favor tax cuts as a means to increase revenue or to buy off Democrats. He favored them because they took government, the people’s servant, out of the way of the people.” Not only did Coolidge’s government austerity program contribute to the prosperity and economic growth of the mid 1920s, the program, while unpopular in Washington, proved extremely popular with the people. Coolidge easily won re-election with a strong majority of the popular vote despite running against both a democratic challenger and a relatively popular Progressive Party candidate Robert LaFollette.

The political lesson of the 1920s is a lesson for today that should be more broadly embraced. Government austerity is not private–sector austerity. Government austerity is a path to private sector prosperity. The correct policy is one which combines true budget cuts—actual reductions in federal government spending—with reductions in tax rates, not some elaborate political plan that only slows down spending increases, thus continuing to add to the government burden on the economy and only allegedly balances the budget after 10 years. The ultimate path for a return to prosperity is described by Rothbard (xxiii and xxiv) in September 1982: “the Austrian program of hard money, the gold standard, abolition of the Fed, and laissez-faire.”

America is again faced with the prospect of future economic hell: stagnation, high unemployment, and potentially an inflationary depression- all consequences of the resurgence of Keynesian-inspired policy (both monetary and fiscal) that has brought us the current high debt and deficit crisis, combined with stagnating employment and anemic economic growth. Shlaes thinks things could be reversed with the emergence of a leader willing to articulate and defend a “combined a policy of deficit cuts with one of tax cuts” by making “a moral case for saying ‘no.’” Her belief: “A political leader who does the same today is likely to find an electorate more inclined to respond ‘yes’ than he or she expects.” Let’s hope she is right, although it may be wiser to stop looking to politicians to effect real change.