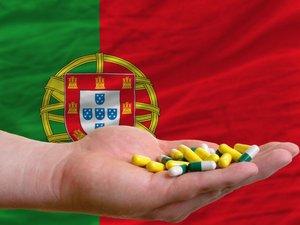 This month, Portugal celebrates fourteen years of drug decriminalization. The grand experiment is now considered a happy success considering it was adopted out of desperation and in the face of dire warnings from proponents of the global drug war.

What Led to Decriminalization

During the mid-twentieth century, Portugal experienced fifty years of military dictatorship, and when leftist democratic control was reestablished in 1974, many expatriate Portuguese returned to Portugal from its colonies. Of course, many of these people were dissidents, outsiders, and outcasts, and many of them used illegal drugs.

Over the next twenty-five years, there was a surge in drug use, drug abuse, addiction, overdoses, and eventually a very substantial prevalence of HIV/AIDS and other dirty-needle-related diseases. At the peak of this drug epidemic the rate of drug addiction and HIV/AIDS infection was “considerably higher” than the rest of Europe according to Dr. João Goulão, the longtime drug czar of Portugal.

Goulão was on the eleven member anti-drug commission that formulated law 30/2000 which decriminalized all drugs starting July 1, 2001.

The “grand experiment” seems to be the result of two factors. The first is that Portugal is a relatively poor European country and was unable to fight the war on drugs on every front.

The second factor is that the commission was relatively non-partisan and simply adopted the common sense notion that drug abuse and addiction are not criminal problems for the police to solve. Drug abuse and addiction are medical and psychological problems that are better solved by the individual with the help of professionals and social pressures.

Baby Steps Away from the Drug War

Decriminalization is just one baby step away from the war on drugs, and drug smugglers and dealers are still sought out and punished. Individuals are only permitted to possess very small amounts of illegal drugs without being punished as a dealer. Under current laws, you can still be arrested and sent to counselors, but you do not face imprisonment unless you are an uncooperative multiple offender.

While certainly not ideal, decriminalization has straightforward benefits over complete prohibition. First, otherwise law-abiding citizens will not be criminalized for possessing illegal drugs. Second, drug addicts will be more likely to seek professional help when government treats addiction as a medical rather than criminal problem. Third, the police will have more resources to address real crimes and possibly to provide subsidies for drug treatment programs. Fourth, drug addicts will turn away from dangerous synthetic drug substitutes and turn more to the natural illegal drugs like marijuana and cocaine. Fifth, if needles are legal too, then you should see fewer cases of diseases such as HIV/AIDS and hepatitis. Sixth, junkie ghettos will shrink in size and visibility. In sum, decriminalization should result in fewer people dying and being sent to prison and more people living “normal” lives.

Of course, the biggest concern prior to decriminalization was the quantity of illegal drugs consumed. That concern is even more dominant when discussing outright legalization of drugs. Back when Portugal was considering decriminalization, I was interviewed by the "Time Magazine of Portugal,” and the reporter stressed that this was the prime concern in Portugal at the time. I responded that you cannot know the answer to that question in advance, that you will never know the answer to that question, and that the question was unimportant.

When I was pressed by the reporter for a guess, I responded that overall consumption would not change much; it might increase some in the short run and would decrease in the long run, unless the drugs were legalized in the future for medical or recreational uses. However, I stressed that there are undeniable benefits (listed above) and there is no reason that consumption would explode due to decriminalization.

Many Still Refuse to See the Success

It is hard to blame the Portuguese for their concerns at that time. Decriminalization was considered a dangerous experiment and a dodge of the United Nations’ rules of the global war on drugs. However, mainstream drug policy experts remained “skeptical” of the Portuguese experiment even after nearly eight years of experience.

Mark Kleiman, director of the drug policy analysis program at UCLA, claims that Portugal was an unrealistic model. Peter Reuter, another leading drug policy expert, claimed that despite achieving its central goal (decreased consumption) it could be explained by the fact that Portugal was a small country and that drug abuse is cyclical in nature.

Remarkably, Dr. Goulão, who helped design and oversee the new law seems uninformed and perplexed at the positive outcomes even to this very day. He was recently quoted as saying: “it’s very difficult to identify a causal link between decriminalization by itself and the positive tendencies we have seen.”

One picture that sums up the Portuguese success story shows that Portugal has the second lowest death rate from illegal drugs in all of Europe after experiencing one of the worst rates with prohibition. 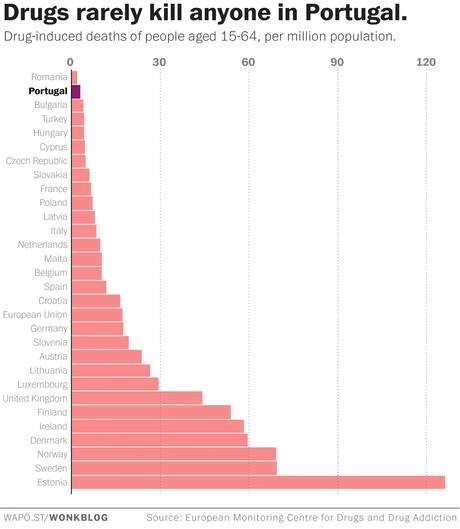 It is also interesting to note that the European Monitoring Center for Drugs and Drug Addiction (EMCDDA) is headquartered in Lisbon. One analyst who works at EMCDDA, Frank Zobel, calls Portugal’s policy "the greatest innovation in this field" and “that the policy is working. Drug consumption has not increased severely. There is no mass chaos. For me as an evaluator, that's a very good outcome."

It is a happy anniversary for the Portuguese, but a scary one for all the drug warriors around the world whose incomes and power depend on continued ignorance about the effects of prohibition.