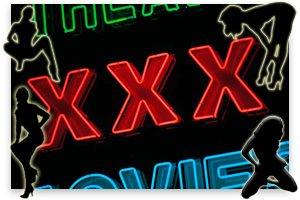 "The foremost danger to marriage in our time is the wholesale degradation of women in the popular culture," writes Shmuley Boteach in The Jerusalem Post.

"Society has spoken and they have demanded it," Max Hardcore told CNBC's Melissa Lee in an interview just prior to being sent to prison on obscenity charges. "There are more people buying my videos than there are protesting my videos."

Besides, as Murray Rothbard pointed out in For A New Liberty,

It is not the business of the law — even if this were practically possible, which is, of course, most unlikely — to make anyone good or reverent or moral or clean or upright. This is for each individual to decide for himself

But for those who prefer the sin, pornography is everywhere. The great irony here is that many in that business don't like it this way. Despite all the money that's generated, more and more pornography is now available for free.

"[T]he tenuous legal status of the industry has made it difficult for it to use copyright laws to inhibit competition," Michele Boldrin and David K. Levine explain in Against Intellectual Monopoly, "and so as technology has changed, pornography has become a cottage industry with many competing small-scale producers."

the main technology for reproduction and distribution of pornographic materials consisted of glossy magazines and movies circulating through the chain of X-rated movie theaters.

"Major companies that serve as a gateway to content on cell phones in the U.S. such as Verizon don't allow explicit adult content," the Los Angeles Times reports. "But like cable and satellite companies in the 1990s, they may change their minds when they see the potential profit."

Boldrin and Levine believe a case can be made that the early growth of the Internet was due to the replication and distribution of pornographic materials: "Online pornographers are usually among the first to exploit new technologies — from video streaming and fee-based subscriptions to pop-up ads and electronic billing," the economics professors write.

But while customers receive a better product that's more available at a lower cost, big-budget monopolies that are slow to innovate struggle and die. Penthouse filed for Chapter 11 bankruptcy in 2003 and Playboy Enterprises lost $156 million last year and has struggled financially for many years. And X-rated movie theaters are going the way of the buggy whip.

CNBC's Melissa Lee visited the home of adult superstar Jessie Jane in Oklahoma City. Ms. Jane appears to live a normal family life in a modest home with a husband and son, doing laundry and going to ball games. Although she wouldn't provide numbers, Jane indicated that she makes most of her money dancing live at gentlemen's cabarets around the country rather than in films — while Angelina Jolie makes millions doing just one picture and doesn't have to work nearly as hard.

So despite the constant outrage and occasional legal hassles, the lack of copyright enforcement in the pornographic movie and entertainment business creates "an industry that is more innovative, creates new products and adopts new technologies more quickly, and for which the reduction in distribution cost has resulted in more output at lower prices and a more diverse product," write the authors of Against Intellectual Monopoly.

Inefficient, outdated product providers that fail to satisfy customers go out of business — to be quickly replaced by smaller, nimbler, more innovative competitors. Customers are able to receive a higher-quality product that is cheaper and provided in more mediums, thus making it more convenient to consume.

And for those who don't want it at all, it might as well not exist.

This is the way capitalism is supposed to work.