Pope Francis Contradicts Himself on Religious Liberty and Capitalism 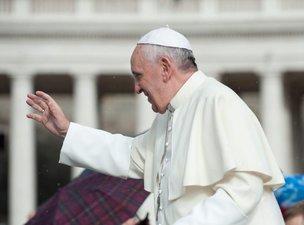 While visiting the White House on his first day in the United States this year, Pope Francis made a strong plea on behalf of religious liberty, which he pointedly directed at President Obama. This came shortly before he made an unscheduled visit with the Little Sisters of the Poor, who are suing the Obama administration over their own right not to include artificial contraception as part of their health insurance plan, which is mandated by Obamacare regulations. Catholic teaching views the use of artificial contraception as sinful. The connection between his comments to the president and his visit with the Little Sisters was apparent.

This laudable and welcome stance comes from a Pope who has, out of a concern for the poor, famously made several misguided statements that are quite critical of capitalism. Combined, these two positions, while seemingly unrelated, represent a profound contradiction in the Pope’s thinking.

In reality, the only socio-economic arrangement that guarantees the rights of all people to exercise their religious beliefs freely is free market capitalism, which emphasizes the rights of people to own and use property as they wish and to contract freely with others on any mutually agreeable terms.

It is a system that is based strictly on voluntary cooperation and that de-legitimizes the use of force and fraud. (As an aside, I personally think that, for this reason, it is the system most consistent with Christianity.) Under such institutional arrangements, there would be no need for specific legal or constitutional protections for religious liberty. These liberties are inherent in the system itself.

Consider, for example, the contraception mandate that is being challenged by the Little Sisters of the Poor. This directly conflicts with one of the most basic rights under capitalism: the right to trade and make contracts freely with others.

Under laissez-faire, or as some are calling it, “unfettered” capitalism, what is covered by any health insurance policy purchased by the Little Sisters of the Poor would be a private matter among the Little Sisters, their insurance company, and possibly any employees who would also be covered under the plan.

If the health insurance plan that was being offered by the insurance company was unacceptable to the Little Sisters, for whatever reason, they would be free to walk away from it or negotiate different coverage with the insurance company. And if the health insurance offered by the Little Sisters to any of their employees were an unacceptable part of their compensation package, they too would be free to walk away and find employment elsewhere or forgo the employer-provided insurance and purchase a separate plan of their own choosing. This might occur as part of an exchange with the Little Sisters, their employers, for a higher wage. All of this would happen without a need for any specific discussion about religious liberty. The Little Sister’s religious freedom and their freedom to make mutually agreeable contracts are one in the same.

This does not end with religious liberties. Indeed, property rights and free exchange are at the heart of one’s ability to exercise civil liberties more generally. The right to freedom of speech and press and the rights to freely assemble, protest, boycott, etc., are all automatically guaranteed under capitalism.

This is because capitalism guarantees our right to disagree with one another, which is really what is being protected when all of these liberties are recognized. In this regard it would be useful for Pope Francis to pay attention to the words of a rather famous atheist, Ayn Rand, who noted that:

Holy Father, religious liberty is nothing more than the right to disagree.

Roy Cordato is Senior Economist and Resident Scholar at the John Locke Foundation.

Roy Cordato is Senior Economist and Resident Scholar at the John Locke Foundation.

The Austrian Theory of Efficiency and the Role of Government

If one starts with a different view of efficiency and market optimality than the accepted notion of perfect...