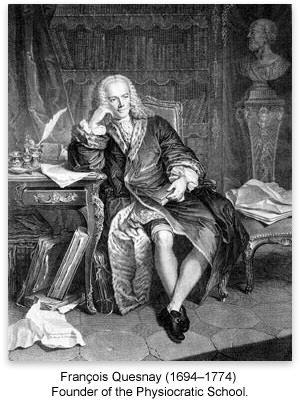 The first self-conscious school of economic thought developed in France shortly after the publication of Cantillon's Essai. They called themselves "the economists," but later came to be called the "physiocrats," after their prime politico-economical principle: physiocracy (the rule of nature).

The physiocrats had an authentic leader — the creator of the physiocratic paradigm — a leading propagandist, and several highly placed disciples and editors of journals. The physiocrats promoted each other, reviewed each others' prolific works in glowing terms, met frequently and periodically in salons to deliver papers and discuss each other's essays, and generally behaved as a self-conscious movement. They had a cadre of hard-core physiocrats and a penumbra of influential fellow travelers and sympathizers. Unfortunately, the physiocrats soon took on the dimensions of a cult as well as a school, heaping lavish and uncritical praise upon their leader, who thus became a guru as well as the creator of an important paradigm in economic thought.

The founder, leader, and guru of physiocracy was Dr. François Quesnay (1694–1774), a restless, charismatic, and intellectually curious soul who was typical of Enlightenment intellectuals of the 18th century. Smitten with the physical sciences, as so many intellectuals were in the shadow of the great Isaac Newton, Quesnay, son of a well-to-do farmer, read widely in his chosen profession of medicine. Gaining fame as a surgeon and physician, Quesnay wrote medical works and also became expert in agricultural science, writing on its technology. In 1749, at the age of 55, Quesnay became personal physician to King Louis XV's mistress, Madame de Pompadour, and a few years later also became personal physician to the king himself.

It was in the late 1750s, when in his mid-60s, that Dr. Quesnay began to dabble in economic topics. The founding of the physiocratic movement may be dated precisely at the moment in July 1757 when the guru met his chief adept and propagandist. For it was then that Dr. Quesnay met the restless, flighty, enthusiastic, and slightly crackpot Victor Riqueti, the Marquis de Mirabeau (1715–1789). Mirabeau, a disgruntled aristocrat with plenty of leisure time on his hands, had just published the first several parts of a multipart work, a grandiloquently entitled best-seller L'Ami des hommes (The Friend of Man).

This work had charmed many Frenchmen through its very flamboyance and lack of system, as well as its curious use of an archaic 17th-century style. While writing L'Ami des hommes, Mirabeau was a quasi disciple of the later Cantillon, glossing and publishing the Essai, but contact with Quesnay soon converted him into the doctor's leading fugleman and propagandist. The ruminations of one seemingly harmless eccentric physician had now become a School of Thought, a force to be reckoned with.

The high placement of the two founding physiocrats served their cause well. Quesnay's crucial place at court, as well as Mirabeau's fame and aristocratic position, gave the movement power and influence. Still, political economy was dangerous in that age of absolutism and censorship, and Quesnay prudently published his work under pseudonyms or through his disciples. Indeed, Mirabeau was imprisoned for a couple of weeks in 1760 for his book Théorie de l'impôt (Theory of Taxes), specifically for his blistering attack on oppressive taxation and on the financial system of "tax farming," in which the king sold the rights to tax to private firms or "farmers." He was released, however, by the good offices of Madame de Pompadour.

The physiocrats conducted their operations through a succession of journals, and through periodic salons, some conducted at the home of Dr. Quesnay, the most prominent in regular Tuesday evening seminars at the home of the Marquis de Mirabeau. The chief physiocratic figures were Pierre François Mercier de la Rivière (1720–1793), whose L'Ordre natural et essentiel des sociétés politiques (The Natural and Essential Order of Political Societies) (1767) was the major work on political philosophy of the school; the Abbé Nicolas Baudeau (1730–1792), the editor and journalist of the physiocrats; Guillaume François Le Trosne (1728–1780), jurist and economist; and the youngest member of the group, the secretary, editor, and government official Pierre Samuel Du Pont de Nemours (1739–1817), who would later emigrate to the United States to found the famous gunpowder manufacturing family.

In no way did the cult aspect of the physiocratic group show itself more starkly than in the adjectives used about their master. His followers claimed that Quesnay looked like Socrates, and they habitually referred to him as the "Confucius of Europe." Indeed, despite the fact that Adam Smith and others spoke of his great "modesty," Dr. Quesnay identified himself with the alleged wisdom and glory of the Chinese sage. Mirabeau went so far as to proclaim that the three greatest inventions in the history of mankind were writing, money, and Quesnay's famous diagram, the Tableau économique.

The sect lasted for less than two decades, going rapidly downhill after the mid-1770s. Several factors accounted for the precipitate decline. One was the death of Quesnay in 1774, and the fact that in his later years the physician had lost much interest in his cult and had shifted to work on mathematics, where he claimed to have solved the age-old problem of squaring the circle.

Furthermore, the fall from grace as finance minister of their fellow traveler, A.R.J. Turgot, two years later, and the disgrace heaped upon Mirabeau by a public smear campaign launched by his wife and children at about the same time, caused physiocracy to fall from influence. And the advent of Smith's Wealth of Nations in the same year soon led to the unfortunate habit of ignoring all pre-Smithian thought, as if the new science of "political economy" had been created single-handedly and ex nihilo by Adam Smith.

In political economy, the physiocrats were among the first laissez-faire thinkers, casting aside contemptuously the entire mercantilist baggage. They called for complete internal and external free enterprise and free trade, unfettered by subsidies, monopoly privileges, or restrictions. By removing such restrictions and exactions, commerce, agriculture, and the entire economy would flourish.

"In general political economy the physiocrats were usually perceptive and made important contributions."

On international trade, while the physiocrats lacked the specie-flow-price mechanism of the brilliant and sophisticated Cantillon, they were far bolder than he in laying down the gauntlet to all mercantilist fallacies and restrictions. It is absurd and self-contradictory, they pointed out, for a nation to attempt to sell a great deal to foreign countries and to buy very little; selling and buying are only two sides of the same coin.

Furthermore, the physiocrats anticipated the classical-economic insight that money is not crucial, that in the long run, commodities — real goods — exchange for each other, with money simply an intermediary. Therefore, the key goal is not to amass bullion, or to follow the chimera of a permanently favorable balance of trade, but to have a high standard of living in terms of real products. Seeking to amass specie means that people in a nation are giving up real goods in order to acquire mere money; hence, they are losing rather than gaining wealth in real terms. Indeed, the whole point of money is to exchange it for real wealth, and if people insist on piling up an unused hoard of specie they will lose wealth permanently.

When Turgot became finance minister of France in 1774, his first act was to decree freedom of import and export of grain. The preamble of his edict, drawn up by his aide Du Pont de Nemours, summed up the laissez-faire policy of the physiocrats — and of Turgot — in a fine and succinct manner: the new free-trade policy, it declared, was designed

to animate and extend the cultivation of the land, whose produce is the most real and certain wealth of a state; to maintain abundance by granaries and the entry of foreign corn, to prevent corn from falling to a price which would discourage the producer; to remove monopoly by shutting out private license in favor of free and full competition, and by maintaining among different countries that communication of exchange of superfluities for necessities which is so comformable to the order established by Divine Providence.1

Although the physiocrats were officially in favor of complete freedom of trade, their besetting passion — and this reflects their often-bizarre economics — was repealing all restrictions on free export of grain. It is understandable that they would concentrate on the elimination of a long-standing restriction, but they seemed to show little zeal for the freedom of importation of grain or for the freedom of export of manufactures. All this was wrapped up in the physiocrats' unremitting enthusiasm for high agricultural prices, almost as a good in itself.

Indeed, the physiocrats frowned on exports of manufactured products as competing with, and lowering the price of, agricultural exports. Dr. Quesnay went so far as to write, "happy the land which has no exports of manufactures because agricultural exports maintain farm prices at too high a level to permit the sterile class to sell its products abroad." As we shall see, "sterile" by definition meant everyone outside agriculture.