A People's Uprising Against the Empire 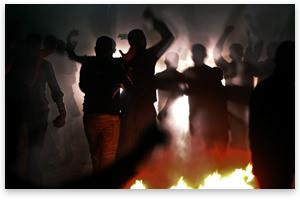 Those of the young generation, people too young to remember the collapse of Soviet bloc and other socialist states in 1989 and 1990, are fortunate to be living through another thrilling example of a seemingly impenetrable state edifice reduced to impotence when faced with crowds demanding freedom, peace, and justice.

There is surely no greater event than this. To see it instills in us a sense of hope that the longing for freedom that beats in the heart of every human being can be realized in our time.

This is why all young people should pay close attention to what is happening in Egypt — to the protests against the regime of Hosni Mubarak as well as the pathetic response coming from his imperial partner, the United States, which has given him many billions in military and secret-police aid to keep him in power.

The United States is in much the same situation today as the Soviet Union was in 1989, as a series of socialist dominoes toppled. Poland, Romania, Hungary, East Germany, Bulgaria, and Czechoslovakia all experienced dramatic meltdowns, while the Soviet regime, supportive of these systems since the end of the Second World War, sat by helplessly and watched. Leaders made vague statements about the need for peaceful transitions and elections, while the people on the ground completely ignored them.

What has sparked the uprising? There are economic considerations, of course. A good rate of inflation in Egypt is considered to be 10 percent, and currency depreciation works as a massive punishment against savings and capital accumulation. Unemployment is high — about the same rate as the United States' — but it is even higher for young people who are worried about the future.

Economic growth has been much better in the last decades, thanks to economic reforms, but this tendency (as in the old Soviet bloc) has only worked to create rising expectations and more demands for freedom. It remains a fact that nearly half the population lives in terrifying poverty.

The core of the problem, it appears, relates to civil liberties and the very old-fashioned conviction that the country is ruled by a tyrant who must go. Mubarak tolerates no challenges to his martial-law rule. There are tens of thousands of political prisoners in the country, and it is easy to get arrested and tortured simply by calling the dictator names. The press is censored, opposition groups are suppressed, and corruption runs rampant. Mubarak's will to power has known no bounds: he chooses all the country's elites based solely on personal loyalty to himself.

Mubarak has ruled for 30 years, and yes, there have been elections every 6 years, but these are widely seen as being only for show. Opposition candidates end up prosecuted for a variety of invented crimes. Democracy in Egypt is merely a slogan for one-party rule. And this is striking: the main excuse for his martial law is one that is all too familiar to Americans — the war on terror (and never mind the terror dispensed by the warriors themselves).

"What the uprisings underscore is a fundamental reality that the world too often forgets. … The people far outnumber the government."

Probably a more substantive issue concerns the digital revolution and the opening up of the entire world through the Internet — a species of the very thing that the United States cited as the reason for the anti-Soviet uprisings of the late 1980s and early '90s. Many young people in Egypt are as connected to the world through social media as American teenagers, and they enjoy access to the sights and sounds of the modernity that the regime so opposes.

To understand what is driving the protests, consider the date that they began: National Police Day on January 25. This holiday was created by Mubarak only in 2009. Talk about misjudging the situation! And sure enough, the government's response was to jam nearly all Internet communications and shut down all cell-phone service on the day of the planned protest. But it didn't work: Thanks to what is now being called "hacktivism," the revolution is being broadcast around the world through Twitter, Facebook, and YouTube, even as Wikipedia is being updated minute by minute. And the Al Jazeera English live feed has, as usual, put the biased US media to shame.

Meanwhile, official government voices in the United States have been pathetically behind the times. Joe Biden and Hillary Clinton have been refusing to describe Mubarak as a dictator and lamely urging a transition to an election — run and ruled over by the Mubarak regime. The protest leadership immediately saw that line for what it was and rejected it outright. It is unbearably obvious that the United States is nearly alone in more-or-less supporting Mubarak, but that is exactly what you would expect of the imperial backer of the despot.

What are the protestors' demands? It is not complicated. As in 1989, the one demand is that the dictator go. This makes complete sense and is the only solution that accords with what is right and just. This and only this will establish the basis for a transition to anything. What follows after that is really something that has to be worked out, not by the CIA, but by the Egyptian people, who have had their voices muzzled for far too long.

What the uprisings underscore is a fundamental reality that the world too often forgets. It is at the core of the relationship between any government and any people, in all times and all places. The people far outnumber the government, and for that reason — and even when the government is heavily armed — every government must depend on some degree of consent to continue its rule. If the whole of a people rise up and say no, the bureaucrats and even the police are powerless. This is the great secret of government that is mostly ignored until revolution day arrives.

More than the anti-Soviet protests of the late 1980s, the Egyptian uprisings reveal what might eventually come home to the American empire itself. Under the right conditions and at the right time, consciousness might dawn right here at home. It could happen here for the same reason it could happen anywhere.

Government knows this, and hence its accumulation of weaponry and relentless propaganda. The difficulty for the state comes when its will to power generates what Thomas Jefferson called "a long train of abuses" that create a burning desire within people to rise up and demand freedom. Because, after all, it is the right of a people — is it not? — to alter and abolish the form of government under which they are forced to live.