A Path To Runaway US Inflation "I see green shoots," said Fed Chairman Ben Bernanke on 60 Minutes back in March, doing his best rendition of Haley Joel Osment from the movie The Sixth Sense. Since then, every poor economic headline in the lapdog media has been preceded with the word "unexpected," as if the clueless chairman's pronouncements were suddenly the Gospel, and the economy had indeed recovered.

Common sense tells us that if phenomenon A causes problem B, then B cannot be rectified unless A is first removed. As an adherent of the Austrian School of economics, I can confidently tell you that a sustainable US recovery is not at hand. An upward blip in the GDP reading (itself a flawed measure of material well-being) must not be mistaken for a sustainable recovery, especially when government borrowing is unprecedentedly high and a lot of the input parameters, not the least of which is the GDP deflator, can be fudged.

I'll borrow an analogy from Peter Schiff. Imagine if you will a victim at the unfortunate end of a Brock Lesnar knuckle sandwich. The blow has knocked him out cold and the medics try to revive him. The best suggestion they can come up with is to have Lesnar pound the man's head even harder with his fists. When the man has seizures from the repeated pounding, a medic (coincidently named Bernanke) screams gleefully "Hurray, he's moving."

Sadly, such is the response to our present crisis by the policy makers in Washington, DC. To solve a problem caused by malinvestments resulting from easy credit at 1 percent interest rates, the Fed is supplying even more easy money at 0.25 percent. None of the malinvestments have been allowed to be liquidated.

Housing prices have been propped up, banks and auto companies have been bailed out, regulations have been increased, debt covenants have been violated, unemployment insurance has been extended. In addition, there's the cap-and-trade bill, the healthcare bill, and a "czar" around every corner.

All of these increase the already-humongous burden on wealth creators. In short, the problems that caused the Great Recession have been compounded. Real output must then necessarily decline. How can anyone logically assert that we are in the beginning of a recovery?

Declining output is not the answer to keep a system with a debt-to-GDP ratio nearing 400 percent (800 percent if you include Social Security and Medicare obligations) solvent. From this vantage point, one can conclude that the real recession is ahead of us, not behind us.

What's Happening Below the Surface?

Since the Lehman collapse over a year ago, the cracks in the banking system have been papered over with an unprecedented amount of money created out of thin air. However, underneath that surface, the real pool of savings is continually being channeled away from wealth creators to malinvestments such as housing, autos, and banking.

"For a fractional-reserve-banking system to stay solvent, the money supply needs to be continually increased by at least the weighted-average interest rate."

This means that total output will decline eventually because there are no investments being made to maintain capital and improve productive capacity. There may be blips here and there, but they are more likely to be the result of capital consumption than of any sustainable increase in output. Meanwhile, for reasons detailed below, the money supply will constantly increase. We then have the textbook case of more money chasing fewer goods, leading to rampant price escalation.

If you happen to catch a NASCAR race on TV, you might hear a driver screaming over his radio, "Tight, tight, tight … LOOOSE!" This cry is followed invariably by a crash.

What the driver is referring to is his race car's inability to turn the corner. A "tight" condition means the car doesn't want to turn and is heading straight for the wall. A "loose" condition means the car turns too readily and wants to spin out. When a car is difficult to turn, the driver ends up putting so much wheel into it that when the car eventually does turn, it overshoots, spinning out of control; and the driver rear-ends the car into the wall.

This is exactly the scenario I envision for the impending price inflation. Bernanke and company are screaming that there is deflation everywhere they look. To combat this deflation, the Fed will keeping printing money and adding reserves by buying all kinds of assets. This will continue until general prices violently overshoot on the other side, causing runaway price inflation.

The M2 money supply is used by a lot of economists as a barometer to gauge price inflationary pressures. Over the past six months or so, this metric has declined marginally. So if one defines deflation as a reduction in the M2 money supply, then we are indeed experiencing deflation.

On the surface, consumers are finally getting religion, curbing their spending habits and paying down debt. Paying down debt is a deflationary activity because it reduces money supply. Unfortunately, not everyone will be able to pay off their debts.

Consider a system with $100 in loans due in a year at a 10 percent interest rate. The total amount of money in the system is only $100 but the amount due at the end of the year is $110. Where will the $10 come from? It has to be lent into existence at some point prior to when the $110 is due.

"It goes without saying that deflation would have been very painful for any debtor. Consider the most indebted entities: the government, banks, powerful corporations, homeowners, and private equity funds run by insiders."

Absent this increase in money supply, the loan will default. On the other hand, an ever-increasing money supply will quickly lead to runaway price inflation, because real output will be unable to keep pace with money-supply growth.

In a sound-money, 100-percent-reserve-banking system, an overwhelming majority of loans would be made to wealth creators. These loans would be funded by real savings and would eventually be liquidated (to simplify the explanation) by the lenders purchasing the produce of borrowers. These can therefore be called self-liquidating loans. I'm not implying there would be no bad loans, just that bad loans would be minimal compared to our current system, because underwriting would be very strict and the fallout of bad lending decisions would stop with a bank's shareholders.

The vast majority of housing loans and auto loans made during the last boom cannot really be classified as self-liquidating because both of these (I hesitate to call them assets) do not produce anything that can be exchanged for money.

In a fractional-reserve-banking system where debt is being paid down, money supply will decline and eventually prices will follow suit. Businesses will reduce wages to stay profitable. Any debtor will find his debt burden becoming more onerous as there is less money to go around.

Eventually, defaults will begin, with assets moving from debtors to creditors. The banking system will implode and depositors will be wiped out until reserves in the system entirely back up deposits outstanding.

This is precisely the process that should have been allowed to happen since 2008. Left alone, nothing could have prevented this catastrophic collapse. Asset prices would've declined massively, considering that the system had about $10 in credit money for every $1 in reserve (before Bernanke injected about $1 trillion more in reserves).

Why Inflation, Not Deflation?

It goes without saying that deflation would have been very painful for any debtor. Consider the most indebted entities: the government, banks, powerful corporations, homeowners, and private equity funds run by insiders. Given these debtors, is it any wonder that the government chooses bailouts rather than letting the market work its exorcism? Every time there is even the slightest deflation, we'll hear Bernanke et al. saying that all hell will break loose unless something is done about it.

If the market were allowed to work, loan defaults would cause bank failures en masse. Bank failures would also wipe out the savings of depositors, because the banks' debt holders will have seniority in bankruptcy proceedings. Yes, all hell will break loose, but only for the people who took imprudent risks like borrowing recklessly or depositing money in unsound banks.

If one bank is allowed to go under and its depositors allowed to be wiped out, you can bet your last dollar that there will be a run on every bank the next day, exacerbating the problem exponentially. The entire banking system would be ruined in a couple of days, with utter chaos, pandemonium, and possibly violence being the rule rather than the exception.

Rather than letting all debtors and depositors be wiped out (and defaulting on its own obligations), the government will intervene via the Fed to shore up the system. The Fed will print money to purchase troubled assets.

The Fed will also print money to fund the US government, because tax revenues will decline precipitously but government mandates will increase (normal operations, transfer payments, unemployment payments, wars, etc.). Once the FDIC runs out of funds to make depositors whole, it will tap into a $500 billion credit line with the Treasury, which in turn will sell bonds to the Fed to raise the money to repay depositors.

Note that when a bank fails but the depositors are made whole, the original money is still in the system and new money is added; this is inflationary. M2 destruction is replaced by M1 creation.

Deflation causes debt defaults, which in turn cause bank failures, which in turn result in inflation when the government bails out depositors. In trying to save debtors and depositors, the policy makers ensure that everyone loses purchasing power via inflation. 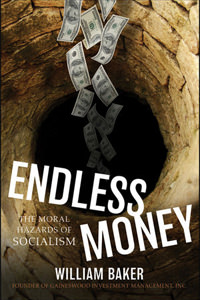 This cycle cannot continue endlessly. One fine day it will blow sky-high. Any event may trigger it, from foreigners unloading US dollars and Treasuries, to US citizens realizing that their money is fast losing its purchasing power.

The Fed will bail out all the affected parties by creating money. Bailouts cause malinvestments that lower real output, beginning the cycle again. This cannot continue forever: it will eventually result in a runaway-inflationary depression.