The Party is Over - Again 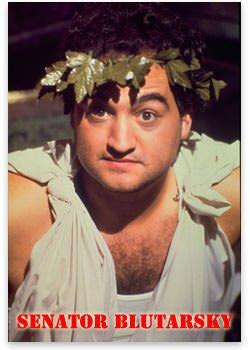 In February, 2001, I saw the end of the credit-filled boom, as the stock market went bust, and predicted recessionary times, which soon followed. It seems, however, that Washington, D.C., is one great big toga party, and if it is true that Blutarsky of "Animal House" became Senator Blutarsky (as the film's credits tell us at the end), perhaps that provides an explanation for the outright foolishness that has gone on with the Federal Reserve System for more than a decade.

However, the Fed and the rest of the D.C. crowd really did not need the hard-partying Blutarsky to set policy, as it seems that Alan Greenspan and his successor, Ben Bernanke, were willing to shed their dark suits and starched collars for a toga made of bed sheets (or maybe some strips of old stock tickertape). Certainly, the policies that these two men and their agents have foisted upon this country since the heyday of the Bill Clinton Administration fall into that of one big party with the Fed spiking the punchbowl with easy credit.

It is hard to know just how far the current meltdown in the stock market and housing market will go, but we can say unequivocally that it will not be business as usual, or business that has been usual for the last many years. We can forget about a 14,000-point Dow for a long while, as economic law — something that politicians have assured us exists only in the minds of "kooks" — reasserts itself, and the results are not pretty.

In this piece, I will briefly point out some of the more egregious things the Fed and the financial system have done and why this monetary charade has been able to go on as long as it has. Before doing that, however, I will deal with one important aspect of economic theory: the relationship of production to consumption.

One of the continuing debates throughout modern economic history (modern meaning the past 300 years or so) has been that of the relationship between production and consumption, the source of what we call Say's Law. This is what separated Say and his allies from Thomas Malthus, and the Classical economists from Marx and his followers. The debate went on into the 20th Century, with the Austrians taking one side, and the Keynesians the other.

The basics of the debate are this: One side (Say and those who followed him) says that consumption and production are directly related, and that consumption flows from production, or "supply creates its own demand." The source of one's consumption, they argue, is one's production. On larger scales, economies that produce much also are going to be societies that engage in the most consumption of goods.

The ramifications of this set of beliefs are important, for if one holds to Say's Law (as do the Austrians), one is acknowledging the efficacy of production and also the acknowledgement that in a market economy markets generally will work efficiently, as long as governments do not interfere with them. Adherents to Say's Law do not disagree that there can be economic downturns; indeed, Say begins his famous Book I, Chapter XV, describing what we would call "recession" conditions. (I make this point because many critics of Say have accused those who hold to Say's Law of believing that recessions are impossible. Socialists are fond of saying that "the Great Depression discredited Say's Law," which is simply not true.)

On the other side, beginning with Bernard de Mandeville and his 1714 "The Fable of the Bees," it is held that because production of goods is not a guarantee that they will be sold (which in itself is true), therefore consumption must always be encouraged or economies will quickly stagnate into periods of "general overproduction" and fall into ruin. To combat this problem, they have argued, people should be encouraged to spend and spend and spend, as saving money ultimately means unsold goods, and unsold goods mean overproduction, and overproduction means layoffs and mass unemployment.

Karl Marx and others systematized this viewpoint to make the case that free-market economies are inherently unstable and if governments do not intervene to bring about consumption, the capitalist economies will implode. For Marx, the source of underconsumption was the profit-taking by capitalists, who had no right to that product which "rightfully" belonged to the "proletariat."

John Maynard Keynes, in his 1936 General Theory, also "discredited" Say's Law and held elsewhere that the creation of new credit by monetary authorities could "turn stones into bread." The idea to Keynes was that private investment spending was unstable, and that that very instability, when coupled with the multiplier effect of investment spending, meant that a market economy was vulnerable to quick downward surges of general underconsumption and overproduction that would quickly lead to the dreaded "liquidity trap."

Thus, his view — and the view that has dominated government economic policies for at least a century — is that government must act to prop up consumption through various actions of monetary creation through central banks, as well as massive spending on public works and transference of income from the non-consuming rich to the consuming poor. The idea was that wealthy people were unlikely to spend all of their income, displaying an unhealthy "propensity" to save, which meant that their spending habits would ensure general underconsumption unless some of that money was taken via taxation and given to those entities — individuals and government agencies — that would "responsibly" spend and keep the economy afloat. Just put money into the "hands of the people," they will spend thusly, and from that spending, production will automatically occur, just as the Golden Calf allegedly rose from Aaron's fire.

All of this hit me hard when I briefly chatted with an official from the Federal Reserve System at a recent economics conference in Seattle. When I spoke to him about the various bubbles the Fed has created over the past decade, he did not deny that point. Instead, he insisted that the bubbles were good, since unemployment is relatively low. My answer (that he admittedly said was hard to argue against) was that he was trying to tell me that without these bubbles, we would be worse off, economically speaking, something that is incredulous on its face.

While the Fed has been advocating credit for nearly anyone with a pulse, in reality it has been advocating the old Keynesian position that it must constantly create new "money" in order to facilitate commerce, and the Fed has not disappointed in that arena. However, despite the assurances of various Fed spokespersons, in reality a bubble is called a bubble precisely because it cannot be sustained over time.

The reason that the Fed has been able to get away with its monetary shenanigans for more than a decade has been the historical accident of the US dollar being a major world currency, and the rise of the Asian economies. The Asian central banks have been willing to hold dollars at levels well out of proportion to their real value, and Americans have benefited — temporarily, I will add — by the fact that the Chinese and others will accept US dollars for their relatively inexpensive goods.

Indeed, one can say that in one way, the Fed has succeeded (temporarily) in giving us the ultimate Keynesian economy, one in which the US government prints dollars and the Chinese accept them without question. All one has to do is find a way to get dollars in one's hands — the lending and credit processes seeming to do the trick — and then sit back and consume, consume, consume!

Thus, whether it be the refinancing of one's home (again and again) to put extra cash in one's pocket, beating the latest stock bubble, or "flipping" a house, there has seemed to be no end to government schemes to direct money to people to enable them to live beyond their means. However, Say's Law is not dead; indeed, the markets now seem to be catching on to the reality that Austrians and their fellow travelers have recognized for years, and that is that a policy of easy money cannot sustain itself. Someone has to pay the piper, and he has shown up at the door.

By 1971, however, it was clear that the dollar by itself was empty, and when President Richard Nixon closed the Bretton Woods "gold window" on August 15, 1971, it was the official beginning of the stagflation that dominated the US economy for a decade. Only when the dollar was rejected by others was the folly of Washington's endless economic toga parties fully exposed.

From the housing bubble to the latest brief upward explosion in the stock market, we are now faced with the hard reality that there is no place for this huge wad of cash to go. It is not the case that we have a "liquidity problem" because there is no money to lend; we have a "liquidity problem" because the outlets for borrowed money have shrunk drastically.

Furthermore, the Chinese are now beginning to realize that the dollar is not what it used to be, and bellicose talk from Washington is wiping out whatever good will has been present between China and the United States. The war in Iraq has turned that country into a charnel house, oil and gasoline prices have drastically increased, thanks to the war and government policies, and people are finding that Washington has nothing to offer, as if it ever did.

War abroad and fiscal and monetary irresponsibility at home gave us the infamous end of Bretton Woods 36 years ago. (I am not endorsing the Bretton Woods agreement of 1944, which Henry Hazlitt knew from the beginning to be terribly flawed, but in retrospect, it was still superior to the current monetary madness that is the Federal Reserve.)

It now seems that the authorities have learned nothing from the financial disasters of four decades ago: they are determined to make the rest of us repeat them. Granted, many of us have benefited from this era of "easy money," but that is going to change. Indeed, the party is over, the lights are out, and I don't know when they will be turned on again. Please leave your togas at the door.