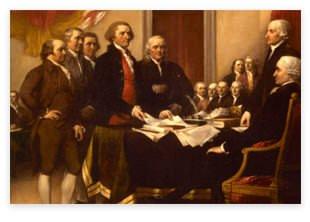 "It is our true policy to steer clear of entangling alliances with any portion of the foreign world." – George Washington

I have written before about the critical need for Congress to reassert its authority over foreign policy, and for the American people to recognize that the Constitution makes no distinction between domestic and foreign matters. Policy is policy, and it must be made by the legislature and not the executive.

But what policy is best? How should we deal with the rest of the world in a way that best advances proper national interests, while not threatening our freedoms at home?

I believe our founding fathers had it right when they argued for peace and commerce between nations, and against entangling political and military alliances. In other words, noninterventionism.

Noninterventionism is not isolationism. Nonintervention simply means America does not interfere militarily, financially, or covertly in the internal affairs of other nations. It does not mean that we isolate ourselves; on the contrary, our founders advocated open trade, travel, communication, and diplomacy with other nations.

Thomas Jefferson summed up the noninterventionist foreign policy position perfectly in his 1801 inaugural address: "Peace, commerce, and honest friendship with all nations — entangling alliances with none." Washington similarly urged that we must, "Act for ourselves and not for others," by forming an "American character wholly free of foreign attachments."

Yet how many times have we all heard these wise words without taking them to heart? How many claim to admire Jefferson and Washington, but conveniently ignore both when it comes to American foreign policy? Since so many apparently now believe Washington and Jefferson were wrong on the critical matter of foreign policy, they should at least have the intellectual honesty to admit it.

Of course we frequently hear the offensive cliché that, "times have changed," and thus we cannot follow quaint admonitions from the 1700s. The obvious question, then, is what other principles from our founding era should we discard for convenience? Should we give up the First amendment because times have changed and free speech causes too much offense in our modern society? Should we give up the Second amendment, and trust that today's government is benign and not to be feared by its citizens? How about the rest of the Bill of Rights?

It's hypocritical and childish to dismiss certain founding principles simply because a convenient rationale is needed to justify interventionist policies today. The principles enshrined in the Constitution do not change. If anything, today's more complex world cries out for the moral clarity provided by a noninterventionist foreign policy.

It is time for Americans to rethink the interventionist foreign policy that is accepted without question in Washington. It is time to understand the obvious harm that results from our being dragged time and time again into intractable and endless Middle East conflicts, whether in Iraq, Iran, Syria, Lebanon, or Palestine. It is definitely time to ask ourselves whether further American lives and tax dollars should be lost trying to remake the Middle East in our image.