Opposition to State Power Evaporates Whenever There Is a "Crisis" 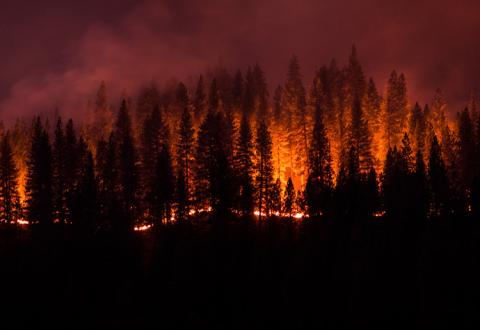 [Originally published as "Sons of Leviathan" in October 2007.]

Robert Higgs identified the Leviathan as an opportunistic beast, using crises—real or manufactured—to expand its realm, to slither its tentacles into the remaining halls where large amounts of liberty are found. Any national or international event can be spun into the need for more government, more interventions, and more intrusions of its slimy appendages.

We have seen this time and time again, as the Leviathan strikes while the masses tremble. Somehow we are calmed by the sight of this powerful yet ugly serpentlike creature, believing that it is only grasping what it needs in order to protect us, and praying that it will release its grasp once the crisis passes.

However, government never willingly releases its hold of liberty. No, and in fact, any taste of the liberty that remains in possession of the masses simply whets government's appetite for more. That which we give up in a momentary shudder of fear is gone forever.

Nevertheless, crises never seem to arise often enough for those wanting more power. Therefore, government will manufacture events, or spin the innocuous or unrelated incident into a crisis, whenever it desires more of the people's liberty. While Higgs's scholarship shows how this occurs at the national level, it also occurs at the local level as the sons of the Leviathan seek their own bits of power, the tidbits dropped from the mouth of the great beast.

Not four miles from my home is an old bridge that captivates many. Folks like the bridge's style, simple beauty, and setting. The bridge, a registered national historic place, spans a section of the Olentangy River that still holds its natural qualities—a stretch of the water designated as a state scenic river.

Local and state officials—led by the county engineer, an elected official—wanted to tear down this bridge years ago. They regularly cited its age, restricted traffic flow, and possible structural deficiencies as reason to replace it with a modern—though institutional-looking—cement span. In opposition, local residents and other nature lovers have fought government all along. They have used every possible means to stop the destruction of their favored bridge. In fact, they even appealed to laws that protect areas designated as state scenic rivers and bridges deemed historic—anything to stop the state (you just have to love it when laws impede the state and its local minions).

The two groups—bridge lovers and government officials—locked horns, with neither side gaining ground. But, that all ended with one tragic event: the collapse of a bridge in Minneapolis. Finally, a crisis.

Within days, the county had reevaluated the structure of the bridge and determined that it was indeed deficient. Well, the bridge wasn't actually deficient, but there was some slight evidence that overweight vehicles may have continued to cross it. So, they closed it down.

After years of battles, it only took one national event to change the balance of power at the local level: government had won. No voices arose from bridge lovers in defense of their span. No, they simply rolled over in the face of the fear; they blinked. And with that, years of battle ended, and their bridge is gone.

It certainly appears that local governments used the timing of a national tragedy to pursue their goals. The closing of the bridge was now an issue of safety, and government always claims a monopoly on the ability to provide safety. And, more important, the majority of local citizens have come to agree with government on this.

OK, so this incident is not really a matter of negative rights, but it does show how even local governments take advantage of any situation, large or small. And how local residents willingly concede that government is security.

More to the point: in June of 2001, a local resident was arrested for possession of pipe bombs, assault rifles, etc. This individual and his fellow conspirators were bombing and shooting in the state park not seven miles from my home, in an outlying suburban area. The man had strong ties to national groups that advocate violence as a means to achieve political ends.

Even though there was strong evidence to believe that harm would result from the groups' activities, and given that this all occurred after Oklahoma City, it is hard to imagine today that the arrest was only considered minor local news. The Leviathan could not advance, not yet anyway.

A few years later, another local resident blustered about bombing a local mall. There was never any evidence that he possessed the wherewithal to execute his plans. Yet, post-9/11, this arrest achieved much greater attention. The Leviathan was allowed to advance because a majority of local residents have accepted—no, embraced—the belief that only government can provide safety in a crisis, and that safety is more valuable than liberty.

Finally, there are the debates over how much money is required by the various local governments to protect us in the event of a major natural disaster. Katrina has become the cry for more funding, because many believe that there can never be too much money spent on safety.

Given this, the city administrator rolls out the most fantastic scenario of catastrophe and emphatically states "We have to be ready for this." Not to be outdone, the police and fire chiefs one-up the administrator and each other with scenarios bordering on the bizarre, claiming that "the city must be ready for these also." Then, in unison, council members and local media race to bring attention to the need for more government, and the local Leviathans smile.

Of course, money is the solution, and more is always needed. However, dare question them and they will scream "Katrina, Katrina, Katrina!" The crisis drives it all.

So, we have a closed bridge, reduced liberty, and additional taxes. Yet many claim that we are safer for all of this. But are we safer, or is government safer? I venture to say that the local Leviathans are smug and more comfortable in our need for them. We, on the other hand, are in more danger than ever of losing the remnants of liberty that we still hold in our possession.

We must be vigilant with regard to the great Leviathan, as well as its local sons. They all exist solely to rob the liberty we hold dear.