One Race to School Them All 09/07/2012Mike Reid
The great antifascist scholar Ludwig von Mises warned that government schools are an inevitable source of ethnic conflict, because dominant nationalities can use them to indoctrinate children from other cultures, pulling them away from their parents and communities.1 In Canada, this was explicitly the aim of the Indian residential schools, which sought to "kill the Indian in the child."2

The Canadian government began the schooling of aboriginal children in earnest by setting up the residential-school program in 1883. The goal was to take kids away from their disobedient, barbarian parents and make them into submissive, civilized British subjects.

By the time the last of the Indian residential schools closed its doors in 1996, they were infamous for rock-bottom standards of education and sky-high rates of physical and sexual assault against children.3

But the source of the brutality in residential schools was essentially the same as that of other public schools in multicultural states. Mises, an Austrian Jew, was probably thinking about the ethnic strife in his homeland when he wrote,

In those extensive areas in which peoples speaking different languages live together side by side … [t]he school can alienate children from the nationality to which their parents belong.… Whoever controls the schools has the power to injure other nationalities and to benefit his own. (Liberalism, p. 114)

In Canada, the cultural gulf between the ruling English, French, and Scottish cultures and the dozens of subjugated aboriginal cultures was exceptionally wide. Many Europeans believed it was their own destiny to dominate this wild land, and the natives' destiny to disappear or assimilate. But the natives were not going away quietly.

In 1886, one year after armed Métis and Cree uprisings in the western prairies, Indian-school inspector John McRae remarked, "It is unlikely that any Tribe or tribes would give trouble of a serious nature to the Government whose members had children completely under Government control."4

Come for the Food. Stay for the Shackles.

The state hired clergymen to run the schools (partly because they were cheap to hire), and as a result many former students identify their awful experiences with missionary Christianity rather than with coercive government. Certainly, many supposedly Christian teachers in the residential schools have foul crimes to answer for.

But the state appointed the principals; it built the schools; it paid for the system. Most importantly, the state corralled the children through the school doors.

The government schools were compulsory for all Indians under age 16. State agents enforced this rule only sporadically at first, but the government had other methods of persuasion.

Most aboriginal people in Canada were by the late 1800s subject to massive state regulation. The state confined them to reserves and forbade them to sell any produce to non-Indians without written permission from a government "Indian agent." Aboriginal people also could not (and in most cases still cannot) privately own any real estate on the reserves.

There is no liberty without economic liberty. Some aboriginal parents wanted their children to get a Western education. But because they were economically trapped in reserve life, such parents couldn't travel around, much less shop around for good options. They were stuck with the monopoly provider, the residential schools.

In other cases, families were simply starving because of the socialistic control of their lives. They figured that at school their children would at least be well fed.5

Still other parents kept their kids out of the government officials' hands however they could. One girl remembers that her father "sent me to hide in the woods. He told the Indian agent I wasn't home, which was true. I was hiding in a hollow stump."6

The schools themselves were often located many miles from any child's reserve, partly to save costs by operating at central locations and partly to make running away difficult. Several children died trying to make it back home through the wilderness.

When the teachers caught a runaway, they might horsewhip him in front of the other students as an example. Or the teachers might lock him in solitary confinement for days, or simply chain him to his bed at night.

One father who travelled to visit his daughter at school saw a girl with her legs shackled together to keep her from getting up enough speed to escape.

In his introduction to Separating School and State, Misesian scholar Richard Ebeling wrote of public schools in general that

The parent has been viewed — and still is viewed — as a backward and harmful influence in the formative years of the child's upbringing, an influence that must be corrected for.… The public school, therefore, is a "reeducation camp." (p. xiv)

In the residential schools, reeducation was taken to its logical extreme. The teachers believed that every aspect of an aboriginal child's upbringing was a threat to his chances of becoming a loyal British subject.

Most of the cultures these kids were being snatched from were largely anarchic, voluntary societies. There was warfare, but no conscription. There was trade, but no taxation. There were leaders, but no rulers.

There were elders to give advice, but there were no kings or presidents to give commands.7 Each man and woman decided for himself what to do each day.

Traditionally, the whole point of a child's education in such a culture was to prepare him to make smart decisions on his own to help his family survive and grow. For Cree hunters of the boreal forests, for example, the most challenging moments in a man's economic life came when he was stalking an animal in the bush, with no one around for miles to tell him where to go or what to do next.

So these cultures' methods of education prepared kids to be radically independent. Parents almost never used corporal punishment. They taught children to handle their own emotions and make their own decisions.

No wonder the government teachers thought these people were unruly savages. They had never learned to obey.

The famous Indian Affairs bureaucrat and poet Duncan Campbell Scott worried that "without education and with neglect the Indians would produce an undesirable and often dangerous element in society."8

To neutralize this dangerous element, the residential-school teachers set out to destroy every symbol of a child's membership in his home culture. Teachers cut off the children's long, braided hair and confiscated their furs and beads. They dressed all their pupils in school uniforms instead. 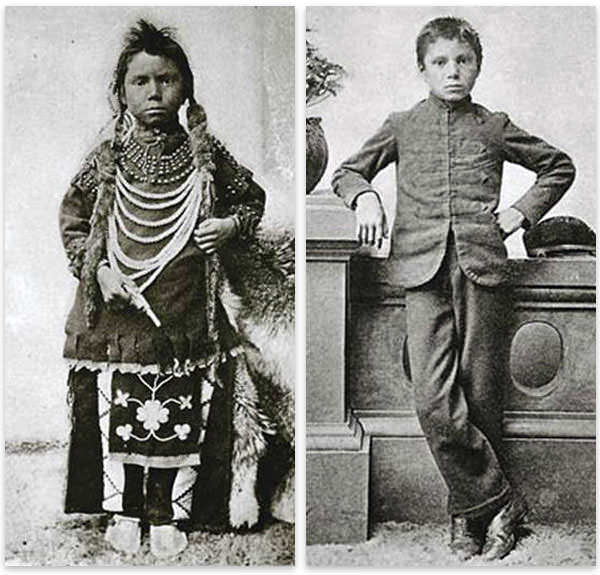 Yes, in the "before" picture, he is carrying a revolver.9

The teachers also took away the names that parents had given their children, and called them by new names, ones the teachers could pronounce. (In some schools, they simply used numbers instead.) And teachers used the strap or worse on any child who spoke a word in his native tongue — often the only language he knew.

Indeed, the school staff used corporal punishment for almost every conceivable offense. One Indian agent remarked in 1896 that the teachers' violent methods "would not be tolerated in a white school for a single day in any part of Canada."10

But the children of savages needed to learn what it meant to obey under threat of force. They now entered a world of total control: the teachers told them, as one former pupil said,

when to go to the bathroom, when to eat, when to do this and that, when to pray. We were even told when to yawn and cough. Children can't help themselves when they cough, but we were told, "Stop your barking!"11

These schools were meant to irrevocably separate each child from his family's culture. One student, Charlie Bigknife,

recalled being told, after his hair had been sheared off at the File Hills school in Saskatchewan, "Now you are no longer an Indian."12

On top of all this, teachers — and older students who had already been warped by the schools — sexually abused many, many boys and girls. The victims' shame and confusion only compounded the psychological attack on their identities.

"This Must Never Happen Again"

Students devised elaborate means of resistance. They used sign languages to communicate with each other, staged raids on the kitchens to steal the teachers' superior food, banded together to protect themselves from abuse, tried repeatedly to escape, and sometimes even set fire to the schools.

But in the end, the residential schools were often successful in crippling their pupils' ability to function in their parents' cultures. Forbidden to speak their home languages for ten months at a time, children often found when they came home for the summer that they couldn't understand their parents or elders, nor could they explain what had happened at school. The children also hadn't learned any of the skills they needed to succeed economically or socially or even emotionally in their parents' communities.

In Canada, this is how the West was won.

For many children, the schools also failed to give them the skills that could have helped them function in the mainstream Canadian economy (even if all the regulations on Indian life had been repealed). Unsurprisingly, as a monopoly provider to an incarcerated population, the school system maintained very, very low standards of education. The abuse, the isolation, and the lack of real education left many graduates unable to be healthy members of any society.

It is fashionable now in Canada to say that the main cause of this nightmare was the racist European belief in Indian inferiority. That is a comforting thought; explicit racism has been in retreat for much of the last century.

But the real danger remains. So long as I have the power to take your children away from you for ten months of the year, teaching them what I believe and treating them how I see fit, you and your way of life can never be safe. If you have that power over my children instead, then I and my traditions can never be safe.

As Mises taught us,

In all areas of mixed nationality, the school is a political prize of the highest importance. It cannot be deprived of its political character as long as it remains a public and compulsory institution. (Liberalism, p. 115)

The Canadian government's recent Truth and Reconciliation Commission report on these horrific schools concludes, "This must never happen again."

The best way to ensure it does not is to heed the words of Mises:

There is, in fact, only one solution: the state, the government, the laws must not in any way concern themselves with schooling or education.