GET NEWS AND ARTICLES IN YOUR INBOXPrint
A
A
Home | Mises Library | Officer Kanapsky, is it? 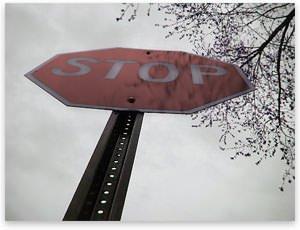 It's a suburban neighborhood, on Sunday morning. There is a three-way stop at which hardly anyone ever goes the other direction than the main one. But you often see a police car in the nearby parking lot, keeping his sharp eye out for evil lawbreakers. These are the dangerous criminals who slow down almost to a full stop that causes the car to shift back the other direction, but don't quite do this. Instead they do what is sometimes called a "rolling stop" which stops short of full immobilization.The policeman in the car regards this as "running a stop sign," as if you paid no attention to it at all, and he'll give you a ticket whenever he catches you doing it.

From the policeman's point of view, it's like shooting fish in a barrel. One recent empirical accounting at this intersection (I dragooned some neighborhood kids into keeping count) observed that more than 9 in 10 people do not come to what the law regards as a "full stop."

I should know about this because, try as I might to be a law-abiding citizen, I have now received my fifth ticket this year at this very intersection one block from my house. That's not a typo. Five! I know it sounds crazy — why the heck can't I obey those who are ordained to keep me safe? — but when you consider that I go through this intersection several times per day, I'm actually doing rather well.

It goes without saying that this is a racket. The city is many hundreds of dollars richer because of my penchant for law breaking alone, and probably hundreds of thousands richer if you include everyone else's.

But it wasn't until someone drew my attention to this link that I understood the full extent of what this whole racket is about. Yes, it's about money. But there is more to it than that. You see, it turns out that I'm an archetype, a person who rolls through stop signs in my safe neighborhood and then gets outraged when the ticket is issued and attempts to "fight authority" rather than pay up. So, fool that I am, I actually believe in "challenging the system." I take seriously the claim that I'm innocent until proven guilty. Can you believe the naïveté?

It's typical of suburbanites. We challenge tickets, especially frivolous ones. And this, it turns out, is precisely what the police want us to do, for reasons explained below.

So on the appointed court day, I leave the office to go to the courthouse to fight this ridiculous ticket. I sit for hours and hours until I'm given a chance to declare my innocence. All the while, the cop who stopped me stands at the back of the courtroom with his arms folded over his bulletproof chest. He is heavily armed. I, on the other hand, was searched before I even walked in.

If at this point I declare my innocence, I am given the opportunity for a trial with my own attorney, whom I must pay because I'm not poor enough to have the court appoint a lawyer even if I wanted it to. This trial is scheduled for sometime in the future, which means another trip to the courthouse, and another opportunity for the cop to enjoy the air-conditioned surroundings of the courtroom he rules. What chance is there for me? In the end, I would probably have to declare myself guilty of something or other, and pay a lesser fine; meanwhile I will have missed at least two days of work.

What's going on here turns out to do with the way policemen are paid. According to federal labor law, they are only allowed to be scheduled for patrolling up to 40 hours per week, just as the rest of us can only be scheduled to work up to a certain number of hours. Courtroom time — and by subpoena, they have to be there — often counts as overtime, meaning 50% more than they are paid for patrolling during regular hours.

In the case examined by John Stossel on 20/20, a policeman named Officer Kanapsky made an additional $21,562 over his regular pay just by standing around in court. The more tickets he issued, especially for minor issues that outraged people are likely to challenge in court, the more money he made. This is a result of labor law. As the Department of Labor says, "An employer who requires or permits an employee to work overtime is generally required to pay the employee premium pay for such overtime work."

Now, it starts to make sense.You and I — his employers, so to speak — are paying a premium for his court time, which is why he spends his patrolling time trying to goad people into going to court. The policeman is being paid time and a half to waste our time and to cause our insurance rates to rise.

In the private sector, the permission to work more than 40 hours per week is a real benefit to the employee and the employer, though the terms ought to be left to the contracting parties. But in the police work, this overtime permission results in a scam that causes police to engage in low-risk, high-revenue earning activities that exploit the population.

It occurs to everyone who is given a frivolous ticket: surely the cop's time would be better spent stopping real crimes, not harassing nonthreatening citizens. Now we can better see why they do this. It may be a product of federal overtime rules, another case in which the ghost of FDR haunts us every day.

But what to do about it? Denounce the cop on the spot? That's not a good idea. It strikes you immediately when you are stopped by a policeman that there is a huge disparity of power at work here. You are effectively captured by them. You must comply no matter what. They have the legal right to use any method to keep you quiet and docile and to punish you to the point of death if you resist.

YouTube is filled with clips showing people being subjected to the latest weapon of choice: the taser gun. The police love the taser gun. It leaves no trace of physical injury. You are shot through with electricity, which causes frightening physical and mental convulsions, but there is nothing you can take a picture of. No bruises. No wounds. No broken bones. This is all the better for them — and all the worse for you.

Never forget what happens to you if you decide to run instead. That's a death sentence. Forget that the instinct to evade your captors is universal and deeply embedded in our mental/biological equipment. The state operates on the assumption that you are its slave when it wants you to be, and otherwise free in name only. This is especially true in the age of Bush, in which all police at all levels have morphed into militarized "security personnel." The friendly, helpful policeman of old civics texts seems to be a thing of the past.

In any case, the phenomenon of Officer Kanapsky raises fundamental questions not only about federal labor law but also about the role of the police in any community. Do they really stop crime? Sure, they arrive after a crime has been committed; they take fingerprints (those only seem to work in the movies) and file reports. In real life, however, crime prevention is due to the private sector: locks, alarm systems, and the like.This is what prevents crimes from taking place.

The police aren't so hot at prosecuting crime either, but for people who commit crimes like slowing down at three-way stops. Yet we are all somehow under the illusion that the police are the reason we are safe. It is the core mythology of our civic religion.

If you do believe that they do more good than harm, consider the unseen costs. What kind of private alternatives are being crowded out by the very presence of the police?

It is also deeply troubling that most people believe there aren't too many police but too few. How many are too many? What if one in three people were a cop? One in two? Maybe we should have two cops for every one civilian. How safe we would be! Really, there is an ethos in this country that you can never have too many cops on the street, and the idea of hiring more nearly always garners public support.

And yet, when it comes right down to it on the particulars, we can't stand the police. We keep a constant lookout for them when we drive. We dread being pulled over. We know in our hearts that they are out to get us, and represent more of a threat than a security for our freedoms.

In the end, we need to realize that the police are like all other government employees: self-interested, living off tax dollars, parasitical on our liberties. The case of Officer Kanapsky shows precisely how and why.